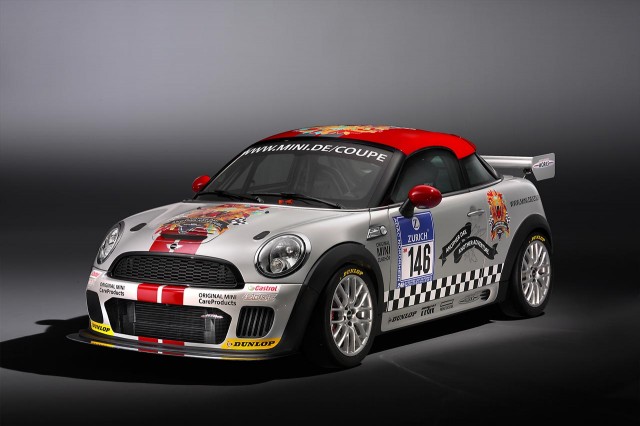 This is going up a few hours early since Autoblog (along with a few other sites) couldn’t quite get that embargo ‘thing’ figured out. For the record gentemen, it was tomorrow morning.

Today takes the wraps off of one of the most ambitious motorsport projects from the brand yet. This weekend MINI will be tackling the 24 Hours of the Nurburgring, perhaps the toughest and most difficult 24 hour race in the world. And to do it MINI has created an entirely new race car based on the R58 MINI JCW Coupe.

We have the full press release below but we can shed a bit more light on this car ourselves. A few weeks ago I had a chance to sit in the car and go over it in detail. In short this is unlike any MINI Challenge race-car ever made. It may look similar but it has much more extensive aero work along with a heavily revised 1.6L JCW engine. Like the Challenge race-car, the JCW Endurance uses a stock JCW engine. Unlike the Challenge car it doesn’t make due with merely 225 hp but instead over 250 hp.

Helping put this power down to the tarmac is MINI’s first sequential manual transmission. It’s a race transmission that is mounted on the dash just to the right of the steering wheel – very similar to last year’s ALMS/LeMans M3s. Shift times are measured in milliseconds.

Inside the cabin is sparse but perfectly laid out. I can tell you from experience that climbing into the car (especially for someone 6’2″) is not a thing of beauty. And getting out is even worse. But once you’re in the race seat and the controls seem to fit like a glove. However I do apologize for putting my size 13 pretty hard (by accident of course) into the key slot which was moved to the left of the steering wheel. 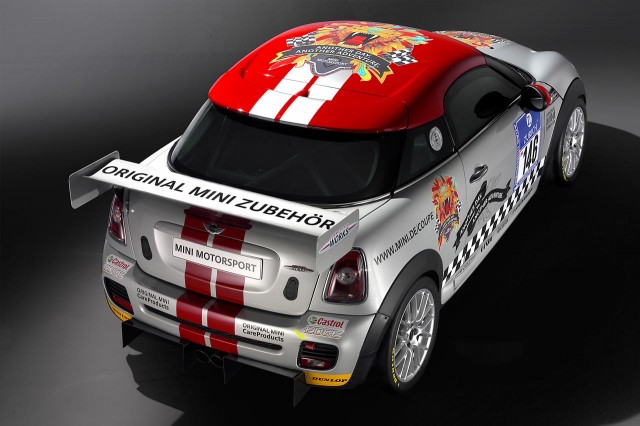 Even opening the door is a strangely new experience as it’s made entirely out of carbon fiber and weighs seemingly just a couple of pounds. I literally swung it open with a flick of my finger. Carbon fiber is also used on the hood and boot-lid to further reduce weight.

Unfortunately MINI doesn’t have any further plans for this car after the 24 Hours of the Nurburgring this weekend. In fact I specifically asked if this was the next Challenge car and got a resounding ‘no’. So what we have here is simply the fastest most ultimate of all ultimate MINIs. A true one-off (or 2-3 off from what we’ve heard) that will hopefully inform future race-cars and even production cars.

You can read the official press release and see the full official gallery and photos we took of the car after the break. 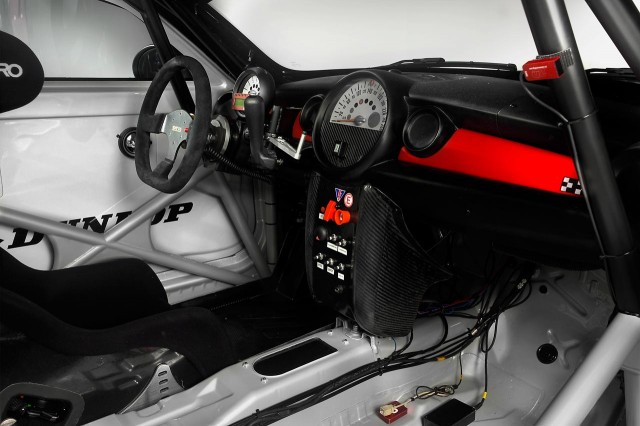 Motor sport is in the MINI genes. And now the carmaker is set to add a new chapter to its racing heritage with the arrival of the MINI John Cooper Works CoupÃ© Endurance. The newly developed racer will line up at this yearâ€™s 24-hour race at the NÃ¼rburgring-Nordschleife circuit, previewing the series-production version of the car due to be unveiled to the public in autumn 2011.

With the participation of the MINI John Cooper Works CoupÃ© Endurance, the NÃ¼rburgring 24-hour race will be staging an automotive world premiere for the first time in its history. At the same time, the extreme demands of the classic endurance event ensure the new MINI model will be given a baptism of fire.

MINIâ€™s declared aim in entering the NÃ¼rburgring 24-hour race is to experience the adventure of the â€œGreen Hellâ€, as the NÃ¼rburgring-Nordschleife is affectionately known. And the brand has called, among other things, on the experience gained over many years of MINI Challenge sprint racing in the development of its new racing car for this unique event.

A pure-bred racing set-up will equip the MINI John Cooper Works CoupÃ© Endurance for a full day lapping the combined Nordschleife/Grand Prix circuit at race speed. Providing the power is a specially-tuned version of the series- produced MINI John Cooper Works engine. The 1.6-litre four-cylinder unit â€“ which boasts a twin-scroll turbocharger and petrol direct injection â€“ delivers 250 hp, and the Overboost function pushes peak torque up to 330 Newton metres. Top speed is in excess of 240 km/h. With the over-boost function (the same found on the Cooper S and the JCW) it can get up to 243 lbs of torque.

The MINI John Cooper Works CoupÃ© Endurance sees the brandâ€™s customary go-kart feeling taken to a whole new level. The stiff race suspension ensures impressive roadholding and gives the driver constant, direct feedback from the road surface. Adjustable shock absorber units allow the suspension set-up to be adapted to fluctuating track conditions, a feature that will come in particularly handy at the Nordschleife. 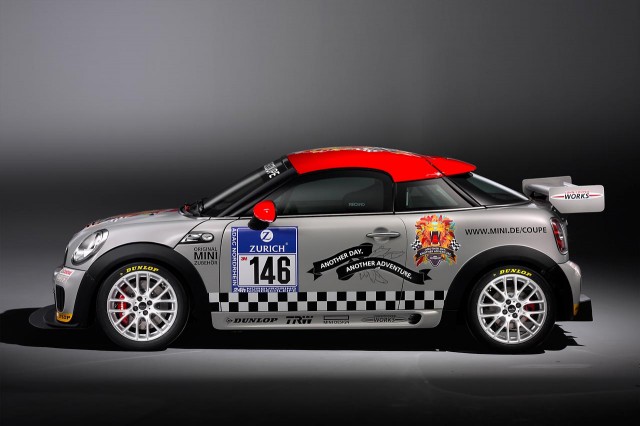 The more steeply raked windscreen of the carâ€™s flat coupÃ© silhouette sets it apart clearly from the Hatch and helps to minimise aerodynamic drag, which the drivers will acknowledge with a smile on the circuitâ€™s long straights. The John Cooper Works Aerodynamics Package further enhances the CoupÃ©â€™s already supreme handling; the front spoiler, rear diffuser and adjustable rear wing generate downforce, optimising the balance between the front and rear axle.

(Head And Neck Support) system. When it comes to active safety, the car adopts the proven braking system with Race ABS from MINI Challenge racing and adds a specially tuned DSC dynamic control system, likewise optimised for the race track. Plus, in the interests of safety â€“ and rapid pit stops â€“ the MINI John Cooper Works CoupÃ© Endurance is kitted out with an integrated pneumatic jack.

MINI 50 Years. Past, Present and Future