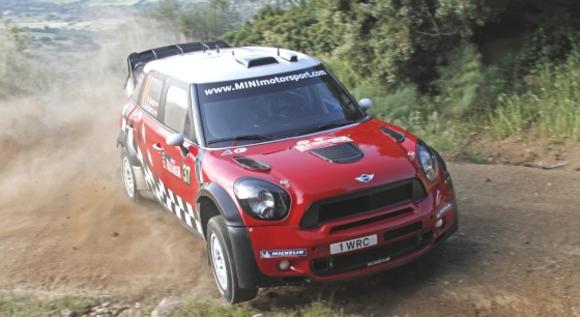 When MINI partnered with racing fabricator Prodrive, we knew that they wouldn’t be building just any ordinary racing car. By choosing Prodrive â€” the company famous for making Subaru a worldwide household name in rally racing â€” it was obvious that MINI was taking its foray into WRC very, very seriously. One area where this commitment is particularly evident is in the safety innovations built into the Countryman WRC race car. Specifically, Prodrive has designed unique side-impact structures into the Countryman WRC’s roll cage structure that offers superior protection for the driving team. Complete info after the break.

[Official Release] The MINI WRC Team is setting new standards, and for its debut into world rallying has made an important step forward in the safety of its car by designing a ground breaking roll cage.

The MINI John Cooper Works WRCâ€™s roll cage has a unique side-impact structure which the engineers from Prodrive believe make it the safest rally car ever. In any accident, be it on the public highway or on a rally stage, a side-impact is the most dangerous, as the distance between the occupants and the point of impact is the smallest. To overcome this, the car has innovative door beams which curve outwards, allowing them to withstand much greater impact forces and to begin the deceleration of the car sooner and over a longer period of time. This significantly reduces the G-forces experienced by the crew.

The MINI WRC Teamâ€™s Technical Director, Dave Wilcock, explained the simple but very important philosophy behind their work in this area: â€œThe new generation of rally cars are more compact than before, however we wanted to ensure that the crew were safer than ever and also that the car felt as spacious as possible. This brought some unique challenges.â€

It was in the early days of the project that this work started with the engineers doing an exhaustive study of crash data. â€œThe Eureka moment was the redesign of the side impact protection bars, routing them farther away from each crew member and subtly changing their shape,â€ explained Wilcock. â€œIn an impact, this brings the structure into play much sooner, allowing softer materials to be specified to safely decelerate the crew over a much longer period of time.â€

The convex curve shape of the door beams allows them to withstand much higher impact forces than traditional straight bars, as well as feeding the loads into nearby welds in a controlled direction, minimising the chance of failure by tearing. The beams are now so far outboard that they pass through the carâ€™s B-pillars, to which they are welded, contributing further strength to the structure.

One important factor that helped this part of the project was the strength of the MINI Countryman bodyshell. â€œFor previous rally cars, we have effectively ignored the original road car bodyshell in calculating the design of the roll cage. However, the Countryman is such a strong and safe car that we very much used this to our advantage and integrated it into the roll cage design, reducing the material we needed to add and so saving weight,â€ said Wilcock.

To evaluate how different roll cage joints and welds performed, Prodrive specially prepared more than 50 roll cage joint samples and carried out physical tests on each one to see how each would fail. This led to the complete redesign of many of the joints and the use of a different welding process, as well as the application of a new grade of steel for the cage tubing.

The team is justifiably proud of its achievement which has come at no cost to the carâ€™s performance. Also so safe is the new design that the FIA is now looking to make the unique side impact configuration mandatory in future designs of motorsport roll cages.