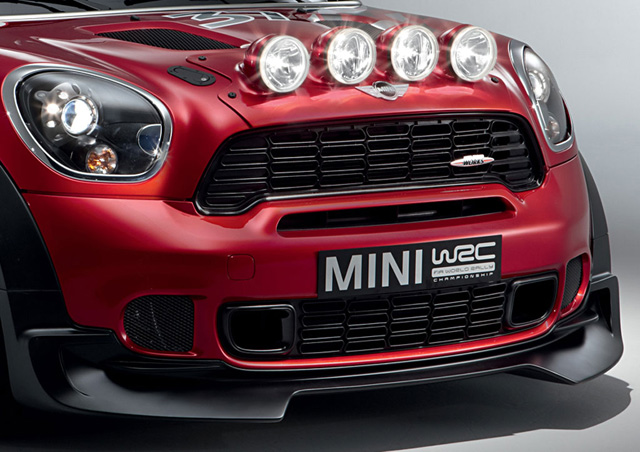 We’re just two days away from the start of MINI’s next race in the World Rally Championship. This weekend both cars will be tearing their way through the scandinavian countryside. Want all the info? Here it is:

[Official Release] The MINI WRC Team is aiming to get both its cars to the end of the Neste Oil Rally Finland to give its drivers valuable competitive mileage in their MINI John Cooper Works WRCs. The team has been very busy with an intensive test programme since its World Rally Championship debut two months ago, and it now heads north for the next event on its 2011 agenda on the 28th/29th/30th July. Dani Sordo (ES) and Carlos del Barrio (ES) will again be driving the number 37 MINI, while Kris Meeke (GB) and Paul Nagle (IR) will be in the number 52 car.

“Finland is a specialist event, which always suits the style of the local Scandinavian drivers,” explained David Richards, Team Principal. “This early in our programme our primary aim is to put more competitive miles on the cars and to get both drivers through to the finish in strong positions.”

This will be the second WRC event on the team’s six-rally schedule, and since its first one in Sardinia has covered approximately 3,000 kilometres in testing on both tarmac and gravel. In the intervening months the MINIs have been in the UK at Cornbury Park and the Goodwood Festival of Speed, testing in Northern Italy, Germany and Finland, as well as taking part in the recce for the Greek WRC round.

The Finnish round of the WRC is one of the most famous events on the calendar. While this will be the first time there for the new MINI, in the 1960s the Mini enjoyed numerous successes in Finland. One of the drivers to appear on the podium in those days was Rauno Aaltonen (FI), so it is very fitting he will be at this year’s event supporting the team. One of his duties on the Saturday will be to present a MINI Countryman to two of his fellow Finns, Arttu Pihlainen, the world’s fastest downhill skater, and Peetu Piiroinen, a successful snowboarder. They won these cars, which are being given by BMW Suomi Oy, in races last winter and both have been customised according to the winners’ designs.

Dani Sordo:
“Finland is a really nice rally and what I would call typical of the sort you would expect in a World Rally Championship. I think I have done it about five times and always enjoy it. I also like the fact there are always lots of spectators, and I think maybe the most on any rally in the championship. It is an exciting rally to do as the roads are fast, we have lots of crests and there are big jumps. You really have to concentrate on all the stages as you are driving flat out, and in many ways it is like being on a race circuit. I was really happy after our test last week in Finland, as the car felt good, so I am going there with a lot of confidence for our performance in this rally.”

Kris Meeke:
“I have been to Finland twice before, but never in a WRC car. You have to treat this rally with respect, as it is most specific with regards to knowledge and I don’t have that knowledge, so I am going to treat it with caution. On some events you can make the pace notes and then drive a hundred per cent, but not here as there is a third dimension with the jumps. However, I am rally-hungry and can’t wait to get back after the long gap since Sardinia. The three day test we did last week went well, and I had a good feeling coming away from it. At the end of the day, that is what this year is all about, getting to know the car and the events.”

The origins of the Neste Oil Rally Finland or, as it was previously called, the Rally of the 1000 Lakes, can be traced back to 1951 when an event called the Hanko Run was held in the seaside resort of Hanko in southern Finland. But from there it moved to Jyväskylä, which is the capital of Central Finland, for an event that went up to the Arctic Circle. It was in 1954 it was renamed the Rally of the 1000 Lakes. However, it was not until 1973 that it became a round of the manufacturers’ world championship, and then in 1979 the drivers’ world championship. It is sponsored by Neste, the Finnish oil company, and this association goes back as far as 1994. It was in 1997 the 1000 Lakes name was dropped. The event has always been unofficially called the Finnish Grand Prix or the Grand Prix on Gravel. Its stages are well known for big jumps, although in Finland the cars are said to be ‘yumping’.

The event, which is being run for the 61st time and includes six new stages, starts on Thursday from its base in Jyväskylä at 16.00. There are three stages before the cars go into parc fermé at 21.15. On Friday service is from 07.30 with the first of eight stages starting at 09.00. There will be a remote service from 13.51 in Lahti, which is in southern Finland and very near Helsinki, and then the first car is due into parc fermé at 22.11. On the final day service starts at 07.00, the first car is due into final service at 20.09 after 11 stages, and the podium ceremony is at 21.00. In total there are 22 stages covering 314 kilometres, while the entire route is 1,355 kilometres.