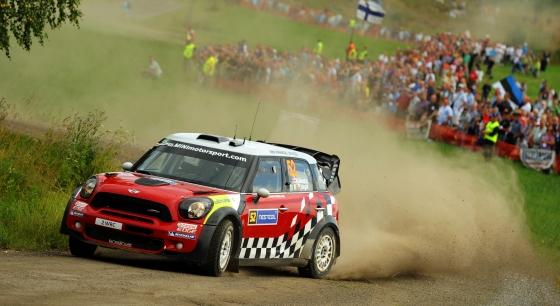 Via MINI Motorsports: Unfortunately the MINI WRC Team did not make it to the finish in Finland. Despite this, it was a positive three days. You can find the best quotes and photos from day three here.

David Richards, Team Principal: “There is obviously a great sense of disappointment throughout the team that the rally should end for both Dani and Kris within sight of the finish. However, we have to take heart from the performance of the cars throughout the event, with their pure speed and the fact we were close to the pace right from the word go. We now go to a very different surface, with the asphalt rally of Germany which will present further challenges and another step in the learning curve for our new team.”

Dave Wilcock, Technical Director: “The first loop of stages today was very good, and these were stages Dani was familiar with. Here he showed us that the pace of the car on certain splits was very, very good. This was encouraging for us, so in general we were very happy with his performance. Kris was surprised by the speed of the others this morning, but, as we have always said, for him it was just about getting experience and getting through the stages. On the second loop it all started to go wrong for us. The stages had cut up far worse than expected and, even though we had raised the car for the second pass, we ran into some problems with collecting sand into the cooling and air intake systems, which eventually made us call an end to our rally and retire the cars rather than suffer any damage. This was mainly because we didn’t want to damage the engine with dirt getting into or through overheating.”

Dani Sordo: “I am a little disappointed as it would have been really nice to finish here in Finland, but motorsport is like that. We have had some small problems, but this helps for us to understand our car and improve for the future. I am quite happy today as the stages in the morning today were very good and we were close to the top times. I enjoyed today as they were really nice stages. I would have liked to do the power stage, but it was best not to risk damaging the engine.”

Kris Meeke: “It was good to get very nearly a full rally distance under our belts, as it has been a long time since we have done a full rally. I began to really get into the groove yesterday and start to really understand the car in rally conditions. I think yesterday afternoon we felt comfortable, and to get within half a second a kilometre of the top guys on this rally is something that I think we can be very encouraged with. Today we were back to the traditional type of stages, and this morning I was really having to learn them. I think anybody coming here for the first time is bound to be blown away by those stages, as the lines these guys take are impossible to do the first time. I am glad I have seen it all and I have video footage of the entire rally. I will be studying that very closely over the next few days, and will even start making corrections to our notes for next year. It is all an experience exercise, but with that we also proved the car is quite fast when the conditions are good, but we just have a bit more work to do when the conditions get rough.”