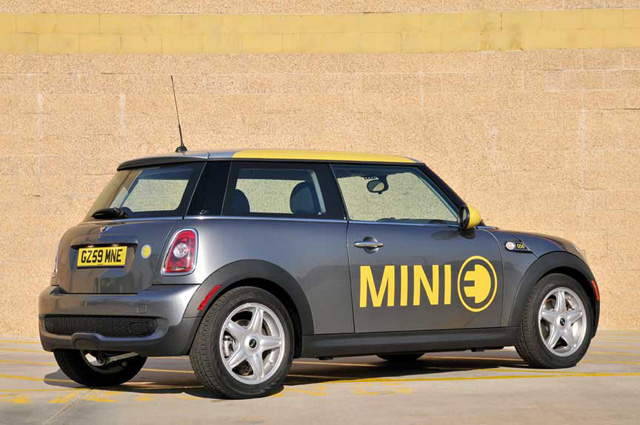 Similar to the US MINI-E trial results, MINI UK has released some very interesting findings from their trial program of one of the world’s first production all-electric cars. Conclusions include:

It’s also interesting to learn that much of the MINI-E fleet will continue to see use, including at the upcoming 2012 Olympics. Full details after the break.

[Official Release] Understanding how electric cars are driven in the real world has taken an important step forward with the release of data from the MINI E field trial in the UK. With 62 members of the public and 76 pool users running the battery-powered hatchbacks over two six-month periods, the Government-supported trial is the most in-depth of its kind in the UK to publish its findings.

An enormous amount of data was collected electronically by data-loggers in the car and the home charging points, and also from extensive driver research carried out by Oxford Brookes University. The early findings have already informed the development of the 2011 BMW ActiveE car, a four-seat car based on the BMW 1 Series Coupe, but the biggest beneficiary will be the BMW i3, the first purpose-built EV from the BMW Group, set for launch in 2013. This information has also helped to inform UK policy-making decisions and other EV market stakeholders.

The UK trial discovered that everyday use of the electric MINIs didn’t radically differ from the typical driving patterns of a control group of drivers of conventionally powered cars in the same segment. In fact, the daily journey distance of 29.7 miles was slightly more than the 26.5 miles recorded by the control cars, a mix of MINI Coopers and BMW 116i models. Interestingly, the UK average daily distance driven for private cars overall is less than 25 miles. With information gathered by on-board data-loggers, the average single trip distance was recorded as 9.5 miles compared to the UK average of seven miles.

Four out of five people reported that 80 percent of their trips could be done exclusively in the MINI E, and this increased to 90 per cent of users saying that with the addition of rear seats and a bigger boot, all their trips could have been done in the MINI E. 84 percent said that severe the severe low temperatures during both phases of the field trial affected the distance that could be driven between charges, but despite that, four out of five participants told the researchers they thought the MINI E was suitable for winter use, with one user, Janet Borgers, saying she “regularly did 88 miles in a single journey in the cold weather”. Another female commuter clocked up almost 8,000 miles over a September to March period.

Given the daily driven distance of just under 30 miles, the drivers felt confident enough not to have to charge their MINI E every night. In fact, the average was 2.9 times a week according to information fed back via electricity smart meters, with special night-time tariffs successfully encouraging individual drivers to charge when it was cheapest, which coincided with a low demand period and a greater proportion of renewable energy in the grid mix.

Nine out of ten drivers told the researchers that charging actually suited their daily routine, with 81 percent agreeing with the statement “I prefer to plug in the car than go to a fuel station”. The running cost-savings were appreciated by users, with one participant telling researchers the thing she’d miss most was: “the money I will have to start paying for fuel again!”

Most charged at home, with 82 percent using their wall-mounted charging box 90 percent of the time. The lack of a comprehensive public charging infrastructure in the UK was noted, with four out of five participants (82 percent) saying they thought that it was “essential” that a network of charging points was established. However, almost three quarters (72 percent) said they were able to use their car perfectly adequately right now as they had access to private charging.

Asked about their driving experience, the trial participants were full of praise. Every single one enjoyed the quietness, with one user quoted as saying: “I like the silence – it’s very futuristic and it causes a reaction when people notice you pull away without making a sound.” And they all agreed with the statement: “electric vehicles are fun to drive.” The reason was partly down to the “fast pick-up and quick acceleration” of the 204hp MINI, again a statement that 100 percent agreed with. One even went so far to say it was “absolutely the best car I have ever driven”.

Driving efficiently to extend the range was seen as part of the enjoyment rather than a chore. Understanding that use of the regenerative braking could increase the range by approximately 15 percent, three quarters of the users (74 percent) agreed with the statement that it was “a game for me to use the regenerative braking in a way that enables me to reach my destination without draining the battery.”

Asked by the Oxford Brookes University researchers for suggestions to deal with the potential danger from the low noise at low speeds, over half (56 percent) said that instead of an artificial noise, the driver should pay more attention. However just over a quarter (28 per cent) said they’d like to have a warning noise below 12.5mph.

The trial found that one week was all that was needed for customers to adapt to the characteristics and peculiarities of driving an EV, such as charging, range, regenerative braking and low noise. However those company car drivers invited to use the MINI E as a pool car on a less frequent basis needed increased training and support during the initial period of vehicle use in order to consolidate their learning.

Fleet use was a big part of the trial with organisations in the UK and in Europe reporting positive feedback from both individual drivers and also fleet managers monitoring the MINI E’s use as a pool car. Those users who swapped out of their regular car reported that the MINI E was fine for 70 percent of journeys made during the working day, while the pool car success rate was even better with between 80-90 percent of regular trips achievable.

The speed of charging was an important consideration for fleet users, while managers also flagged up the need for a clear procedure for the efficient charging of pool vehicles. Companies that participated included Scottish and Southern Energy, Oxfordshire County Council, and Oxford City Council.

The MINI E trial was one of eight UK projects supported by the £25m Ultra Low Carbon Vehicle Demonstrator Programme, funded by the Technology Strategy Board and Department for Transport. These are aimed at bringing forward the introduction of viable electric passenger vehicles to the UK.

Suzanne Gray, General Manager of BMW i said: “The feedback from the trial has been invaluable in helping our understanding of how people really respond to electric cars and other factors necessary to support electric car drivers. With this information we will be in a strong position to provide a well-rounded product and service proposition to customers of the BMW i3 and to work with other players in the electric vehicle market to make it a successful experience for a new generation of users.”

Kulveer Ranger, Mayor of London’s environment director, said: ‘Electric driving technology is coming on leaps and bounds, but people naturally still have questions and concerns. Research such as this by BMW Group into real life experiences is invaluable as it debunks some common myths and underscores why electric vehicles are perfect for urban driving. The trial has also demonstrated the importance attached to supporting infrastructure, which is why the Mayor of London has launched Source London to provide a network of charge points that will help to create optimal conditions for electric vehicle use in the UK’s capital.’

The MINI E Trial in numbers

The MINI E is a two-seat development of the familiar MINI Hatch. It is powered by a 204hp electric motor that also generates 220 Nm of torque. It is driven by battery power in the form of a sophisticated 35 kWh Lithium-Ion battery containing 5,088 cells. The battery was charged by a special home charger supplied by consortium partner Scottish and Southern Energy. This enables a charge time of 3.5 hours at 32 amps. The MINI E has a top speed of 95mph and an official range of 149 miles (according to FTP72 standards), although a realistic range is 112miles.

The UK field trial mirrored those on the East and West coasts of the USA, in both Munich and Berlin; Paris; Tokyo and Beijing and Shenzhen. In the UK 40 MINI Es were driven from December 2009 until March 2011. The 40 private MINI E Pioneers were selected from applicants in the South East of England and paid a subsidised monthly lease cost of £330. The remainder were fleet drivers with an individual car nominated by their company. They represented a mix of males and females from a cross section of income-groups, education backgrounds, urban/rural dwellers, family sizes and annual mileages. Drivers with access to a MINI E pool car also formed part of the study.

The UK Consortium members who have supported the MINI E trials are Scottish and Southern Energy who supplied the home /public charging technology and energy, Oxford Brookes University who devised the research methodology, selected participants and analysed data from users, SEEDA who provided funding support and enabled the participation of Oxford City Council and Oxfordshire County Council, and the BMW Group who led the Consortium, supplied the MINI E and managed driver education and support.

The 40 MINI Es are still on UK roads in partnership activities which continue to promote awareness and understanding of electric vehicles, and they will form part of the BMW Group UK’s official vehicle fleet for the London 2012 Olympic Games.

BMW’s battery vehicle research extends back to the deployment of an electric BMW 1602 during the Olympic Games in Munich in 1972 using lead-acid batteries.