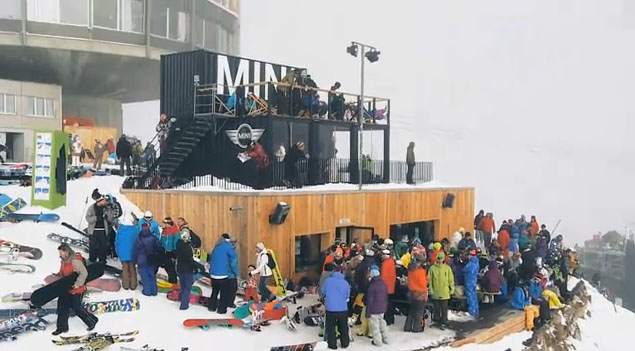 Official Release: For the second time in succession, carmaker MINI is supporting renowned snowboard manufacturer Burton in organising the Burton Global Open Series (BGOS). This international snowboard competition series takes place annually and draws tens of thousands of spectators and top snowboarders from around the world. (Videos after the break)

Creative Use of Space takes flight.

With its Creative Use of Space award, MINI launched a prize last season that draws on the MINI philosophy of utilising space intelligently. The prize money goes to the male and female rider who demonstrate the most inventive and progressive tricks in the halfpipe or slopestyle competitions. For all the Creative Use of Space awards the prize money will be $85,000 in cash. The overall winners of the 2011/2012 BGOS season will also be presented with a brand-new MINI Countryman. This crossover model comes with luggage space of 1,170 litres – ample room to accommodate a snowboarder’s full kit.

This season MINI is presenting the following BGOS events:

In addition, MINI will be the presenting partner of the Burton Super Demo Tour, the Burton AM Series and the new Burton Rail Days event taking place in Tokyo on November 19, 2011.