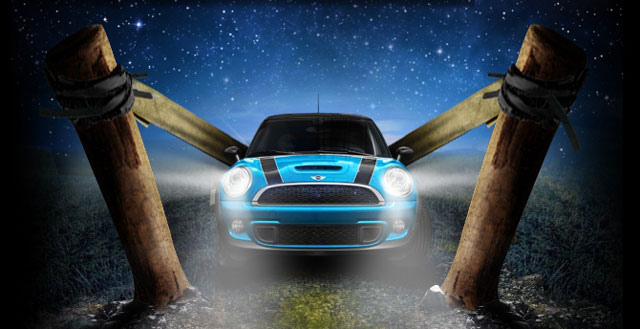 Official MINI UK Release: Over a third of a million Brits have bought one, they’ve clocked up an estimated 15 billion miles on UK roads and have driven enough miles to go around the world 600,000 times or take 33,000 return journeys to the moon and back*…

In the summer of 2001 the very first BMW built MINI rolled off of the production line in Oxford, 10 years later MINI is celebrating a decade of motoring by taking its owners on a virtual trip into space.

MINI is inviting its owners and enthusiasts to log the details of their car into a virtual space world called ‘MINI Lunatics’. Using the car’s mileage, their MINI will be blasted into the depths of virtual space before being docked in the MINI space station.

Exclusive prizes are available for lucky owners who randomly dock in a part of the MINI space station where a prize is hidden. A trip for four to Cape Canaveral is also up for grabs for any ‘MINI Lunatics’ who find seven hidden words which have been carefully placed around the site. Users can enter the prize draw by clicking on the moon.

Extra special prizes are also up for grabs for drivers who have driven the equivalent distance to the moon. Drivers with 252,000 miles or more can register their MINI’s details to be in with a chance of winning special limited edition MINI memorabilia.