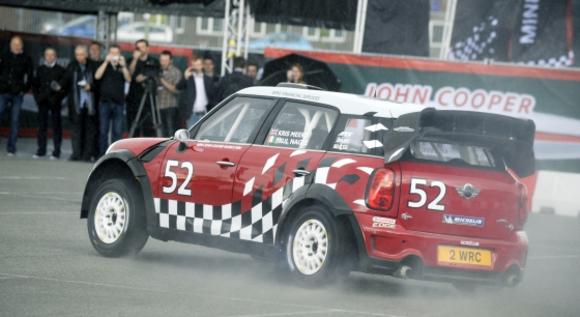 Official News via MINI Motorsports: From 18th to 21st August, the WRC circus switches from gravel to asphalt for the first time this season. This year, the honour of opening the sequence of asphalt rallies in Germany, France and Spain goes to the Rally Germany.

The MINI WRC Team has already successfully completed two tests on hard surfaces – one of which was in the Trier region, which hosts the Rally Germany. However, as Dani and Kris’s last WRC outing in Finland was on gravel, the team will line up at the “Richard Burns Memorial Rally” in order to warm up for the Rally Germany.

Dani and Kris will share the cockpit of the MINI John Cooper Works WRC over the two days of the popular event in East England, which takes place on spacious military airfield in Marham and is named in honour of Richard Burns – England’s first ever Rally World Champion.

“It is obviously about preparing for the Rally Germany,” says Kris, “but it goes without saying that we will always remember a magnificent rally driver at the same time.” Burns won the World Rally Championship in 2001. Two years later he was diagnosed with a brain tumour, from which he died on 25th November 2005 – exactly four years to the day after his World Championship success.

Not only does Burns still have countless fans on the international rally scene: the Prodrive company is also closely connected with the name Richard Burns. Prodrive prepared the World Championship winning car for Burns in 2001. It goes without saying that the MINI WRC Team would also compete at the event in its debut season in the WRC.

The profile of the Royal Air Force Station Marham may have little in common with the conditions in the region around Trier, but the driving style is very similar at both events. “Stop, go, stop, go – that is the story at both rallies,” says Kris. “For that reason, the Richard Burns Memorial Rally offers a good opportunity to prepare for the rapid changes in speed on asphalt.”

Dani and Kris’s experience means they head to the Rally Germany full of confidence. Kris has already lined up there on three occasions, Dani finished second in 2006, 2008 and last year behind serial winner Sébastien Loeb. “We certainly have a bit more freedom to push the cars to the limit,” says Kris. Good news for fans of the MINI WRC Team, who can once again look forward to spectacular action at the Rally Germany.