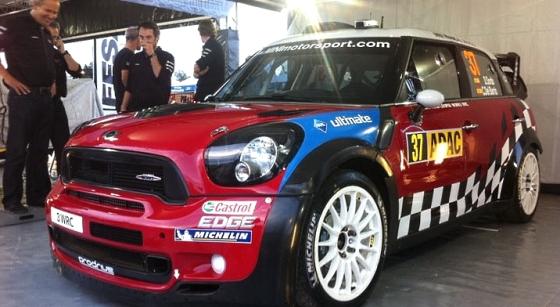 (Official News via MINI Motorsports) MINI rally fans are in for a treat this weekend when Trier hosts the WRC for its ninth stop of the 2011 season. Never before has the MINI brand been represented by more entries in a WRC round than in this year’s Rallye Deutschland.

The MINI WRC Team has been busy preparing for the rally alongside the Mosel since Monday, and fully intends taking the MINI John Cooper Works WRC to the limit in its third event of the year, and the first asphalt rally of the season. “The MINI has shown a great deal of promise in recent tarmac tests in Germany and Italy. We have high expectations going into Rally Germany”, says team principal David Richards.

Dani and co-driver Carlos del Barrio as well as Kris and his Co Paul Nagle acquainted themselves with the virtually unchanged route – and their asphalt-specification cars – during the “Recce”, and approach the start in a confident frame of mind. “I am confident we can do well here,” says the keyed-up Dani.

The other four MINI WRC drivers are also sure to attract the attention of experts and fans alike – particularly Pierre Campana, driving for the French Drive-Pro-Team. The 26-year-old only switched to a MINI WRC a few weeks ago, yet already feels comfortable with his new car after testing ahead of his Rallye Deutschland start. This was proven last weekend with his win on the Richard Burns Memorial Rally.

“The Richard Burns Memorial Rally has been a remarkable event,” says Campana, this year the nominated Number 1 driver for Rally Team France, the team supported by the FFSA, France’s motorsport federation, and thus poised to follow in the footsteps of Sébastien Loeb und Sébastien Ogier. “Rallye Germany is a very important step in my career, but I have to set realistic expectations which are really to get through every stage cleanly,” adds Campana, who will also take the start of Rallye France.

Also confident are Daniel Oliveira of the Brazil World Rally Team and Armindo Araujo from Motorsport Italia. Araujo intends building on his strong performance on the challenging Rally Finland, where the Portuguese placed a promising 20th . He and Oliveira, who ended 49th in Finland and will appear in Germany with just 200 asphalt test kilometres under his belt, have had experience with the MINI WRC since the beginning of the season.

Taking the wheel of the sixth MINI WRC in Germany will be Patrik Flodin. The Swede, who is an ace on snow and gravel, primarily plans to amass asphalt experience in Germany. “I want to show people that I want to learn to be a tarmac driver,” says Flodin, who is taking a break from the Production Car World Rally Championship (PWRC) to compete in Germany. However, this will be the last WRC event of the season for Flodin, who plans to contest two further PWRC rounds.

However, fans are sure to notice the absence of two further MINI WRC entries in Germany. Matti Rantanen, who celebrated his MINI WRC debut in Finland, has withdrawn after the Finn slid off the road and rolled out of the second special stage, having put in a promising performance on the opening test.

Also non-starting is Mattias Therman, who placed 62nd in Finland with his MINI WRC. However, MINI fans can still look forward to strong representation in a quality field by their favourite brand. The best views of all MINI WRC cars and their crews can be had at tonight’s ceremonial start at the Porta Nigra in the heart of Trier at 8 PM CET.

MINIUSA Sales Up 18% in February