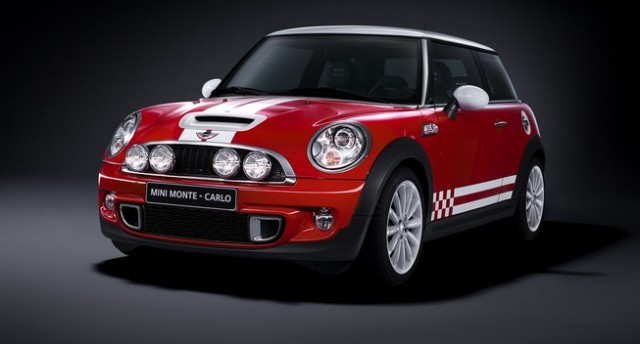 MINI is releasing a special edition R56 Cooper S for the European market to celebrate it’s multiple wins at the Monte Carlo rally almost 50 years ago. The car comes in Chili Red with a white roof and unique stripes on the side. Additionally the car will feature unique badges and a white rings gas cap.

Perhaps the most notable thing to the are the four front driving lights installed on the grille. This marks the first time that MINI has officially sold a car with more than two driving lights. MINI has said this reduced air flow to the engine of the with the R50 and R53 models. However with the R56 the majority of cooling comes into the car via the lower grille allowing for the extra pair of lights.

Inside the theme is continued with “Monte-Carlo Edition stitched into the seats and a two-tone red and black steering wheel. Additionally the steering wheel, keychain and fender decals are individually numbered.

And for the final touch, MINI brand ambassador and winner of the 1966 and ’67 Monte Carlo Rally Rauno Aaltonen will be signing each car.

The 200 of the Monte Carlo editions will be made available to European buyers later this year for the price of €36,500 ($49,600). And for those of you in the US, yes this does seem somewhat familiar. In 2004 MINI USA released a Cooper S called the MC40 to commemorate the same thing. Although with 1,000 units made and no ability to personalize the car with specific options, the MC40 quickly became a tough sell for most dealerships. Hopefully MINI has more luck with the much more exclusive and better options ‘Monte Carlo Edition’.