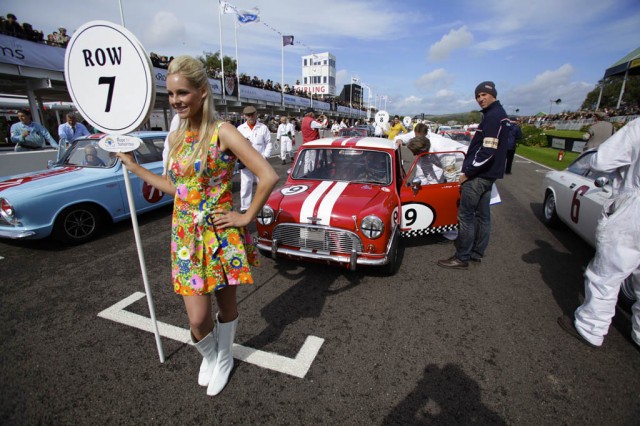 Yesterday we told you about BMW and MINI’s plans at the Goodwood Revival. Today we bring you a bit more news on the actually 1964 Mini taking part in the festivities.

Official Release: It all began in 1962: that is the year the works Minis made their motorsport debuts. Since then almost 50 years have passed during which countless victories were posted, in both racing and rallying. The basis for these successes was the deployment of current models, combined with the best in technology.

2010 saw MINI return to the past: For the first time in the long history of the marque a classic Mini was newly converted for use in historic motorsport. However, the aims remained the same as 50 years previously: Compete at the sharp end of the grid. The Austin Mini Cooper S Competition would prove its qualities in the legendary Goodwood Revival held annually in the south of England.

From 16 to 18 September the town of Chichester ground to a halt. The reason: The Earl of March extended invitations to an event on his estate, which, beside an airport, encompasses a stud farm, a golf course and, of course, a race circuit. But, this was no normal race weekend, but truly a journey to the past.

Not only do all the competing vehicles date back to the 40s, 50s or 60s, but the earl courteously but firmly request all drivers, technicians, marshals and visitors to dress in period attire. Little wonder, then, that the style of all refreshments stands and memorabilia stalls plus the entire paddock reminded of those times.

Taking centre stage was the brand new racing version of the Mini, based on the 1964 Cooper S. However, not much remained of the original production car. The body was completely stripped, derusted and fresh body panels fitted where necessary and as required for its new duties. Its suspension and braking system were optimised strictly in line with the FIA’s regulations. The completely stripped interior boasted the most modern technology available.

Any thoughts that this historic event consists of showboating were soon banished, as works drivers Claudia Hürtgen and Jörg Weidinger realised during Friday free practice. Goodwood sees fair but hard wheel-to-wheel duels, with mistakes being punished heavily by the extremely fast 3,8 kilometre Goodwood Motor Circuit. Both drivers’ qualifying session were, though, blighted by technical teething issues, so rather than fighting for front-running grid positions they found themselves starting from mid-grid.

Saturday’s heat for the St. Mary’s Trophy did not go as planned for Claudia Hürtgen, Chief Instructor at the MINI Driving Experience. Due to transmission problems she fought an unequal battle from half-distance, eventually retiring on the penultimate lap. A long night lay ahead of the technicians, who burnt much midnight in their quest to return the 100bhp Mini Touring Car to its 10 inch wheels in time for Sunday’s second heat.

They succeeded – with two-time European Hillclimb Champion Jörg Weidinger abundantly repaying the mechanics for their efforts with a spectacular race. Starting 13th , the 36-year-old stormed to tenth to end the race as second-best Mini. It was a strong performance, particularly given that the field of 32 starters included illustrious competitors such as the Alfa Romeo Giulia Coupé, BMW 1800 TiSA, Ford Lotus Cortina, Jaguar Mk2 and Ford Galaxie 500.

Thus the trip to England certainly paid off for MINI, as not only had much been learned about the still-new Austin Mini Cooper S Competition, but the team had experienced the highs and lows of motorsport while demonstrating the qualities of this very special touring car in front of a massive audience during the world’s most spectacular historic car event. If that does not warrant a repeat visit in 2012 …