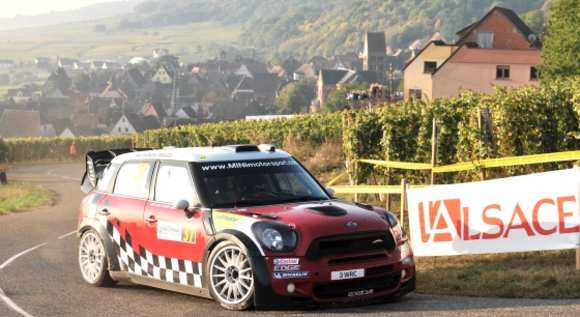 It may not be an outright win but MINI has had a weekend to remember. Dani Sordo finished in 2nd place only 6.2 seconds behind the factory Citroen team driver Sébastien Ogier. The 2nd shows clear and surprising progress from an entirely new WRC team and car. A huge congrats to the MINI WRC team from all of us at MotoringFile. Next up will be the Rally of Spain October 20th – 23rd.

Official Release: Second for the MINI WRC Team in Rally France-Alsace is a result it is justifiably proud of on only its fourth event of the 2011 season. Dani Sordo (ES) and Carlos del Barrio (ES) took the fight down to the wire with just 6.3secs separating the number 37 MINI John Cooper Works WRC and the Citroen of Sébastien Ogier (FR) at the finish in Strasbourg this afternoon. 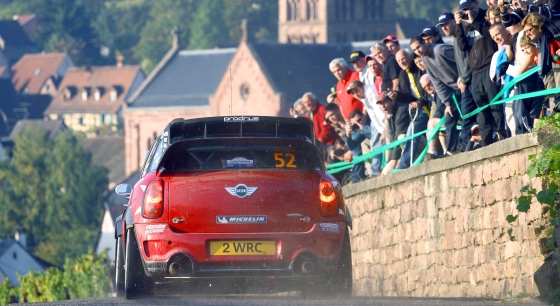 At no point over the three days and 340 kilometres of competition did Sordo give up his fight for the lead he held going into day two. He started the final day 9.5secs behind the Citroen, and from the first of the six stages was trying to claw back the time. Tyre choice was critical, with the soft Michelins used by Sordo instantly proving the right choice. On the first stage of the day (SS18) Sordo took 3.1secs off Ogier to then be just 6.4secs down. This trend continued on SS19 on which Sordo was quickest, and reduced the gap to 4.9 secs. On SS20 it was honours even with them both posting the same time, however, on the re-run of the first stage Ogier was 11 seconds quicker than before, and Sordo lost a second to him. On the penultimate stage the gap was 6.7secs, and then on the Power Stage Sordo posted the second quickest time behind the Ford of Jari-Matti Latvala (FI). Unfortunately after the accident yesterday the number 52 MINI John Cooper Works WRC of Kris Meeke (GB) and Paul Nagle (IR) was not able to start the last day of the rally.

“Yesterday we could have so easily have settled for a secure second place but that’s not our style and I’m so proud that Dani was able to challenge for victory right to the end. On this occasion we will therefore celebrate a second place and give the entire team a big pat on the back, particularly Dani Sordo. He managed to keep the pressure on Sébastien Ogier throughout the entire rally, and he’s certainly laid down a marker for his home event in Spain.”

“Second is an absolutely stunning result for the MINI John Cooper Works WRC. Being just 6.3secs behind Sébastien Ogier clearly shows we were on the pace and, after our fourth rally, being in this position has made us all delighted. It’s been a stunning effort from the team, and especially the crew. Dani drove a faultless rally. He had no punctures, the Michelin tyres were absolutely perfect throughout and never once did we ever have any issues with tyre degradation. This morning we made a tactical decision to take the soft tyre option due to the damp and moist conditions, and knowing that the first stage, which was repeated, had two kilometres of gravel. It was completely the right choice. Then in the power stage to take two WRC drivers’ points and finish in front of Ogier was fantastic for MINI. This is a great position to be in going to Dani’s home event in Spain. We have a lot of work to do before then, but we shall be trying everything we can to repeat this performance there, if not make it a step higher on the podium!”

“As you can imagine I am really, really happy to finish in second position. It is an incredible result for the team so thank you to them and also to Carlos who has been great all rally. I think no-one here expected this before the rally, but we were fighting for the victory and at the end were just 6.3 seconds behind Sébastien Ogier. When you set good stage times as we have here in France, you always enjoy it. Before our first event we did not expect to be doing so well so soon. I am very pleased to be going to my home event in Spain in this position. The car was set-up well here, so I am confident it will be the same in Spain.”

Worldwide MINI Sales Up for May