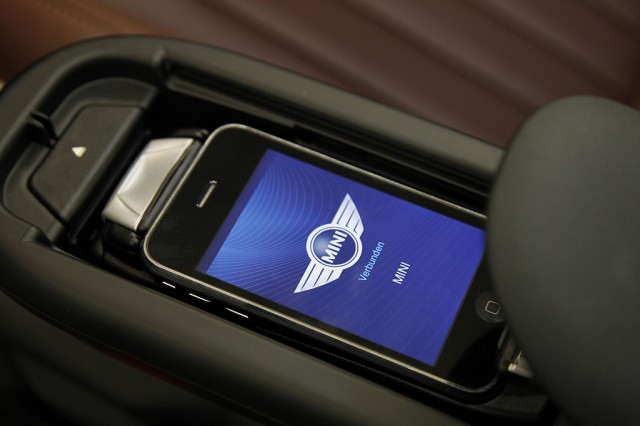 How appropriate that BMW & MINI are talking about its reliance on apps today. Even more that BMW & MINI are announcing that they’re opening the door for 3rd party development of apps within MINI Connected and BMW Apps. It’s a bold move that enhances the infotainment abilities of these cars even further beyond anything else out there. But ultimately it revolves around safety and taking phones out of people’s hands and putting the content in an automotive grade (ie safer) interface.

Official Release: With the introduction of MINI Connected in 2010, the BMW Group became the world’s first carmaker to allow the application-based and extensive integration of the Apple iPhone into its models. Available as an option, MINI Connected links up with a simple USB connection and the MINI Connected App to turn the smartphone into a central interface for infotainment inside, and relating to every aspect of, the car. This technology has provided the launch pad for an all-new in- car infotainment experience. In spring 2011 this interface and app were also made available for BMW vehicles in the form of BMW Apps and BMW Connected. Added to which, the BMW Group has since expanded the app concept to include the internet-based services from BMW Online (available since 2001) and, this summer, also BMW Live. Other compatible apps – and therefore services – from third-party providers can also be integrated into the concept and used in BMW and MINI vehicles. 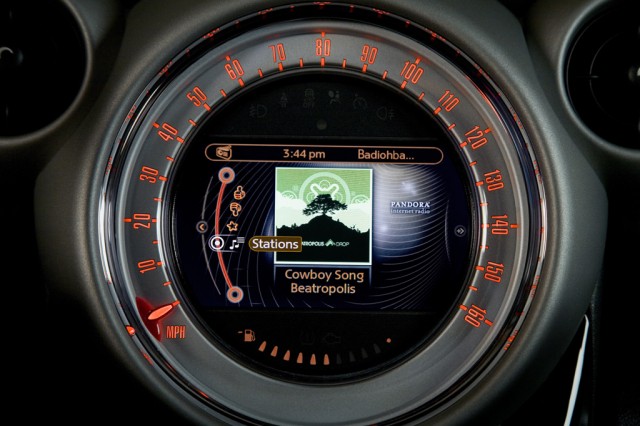 Scope for rapid and flexible expansion.

With the app concept – using either the application-based integration of a smartphone or a browser inside the vehicle – the BMW Group developers have created a highly flexible and still unrivalled platform. Indeed, the functional scope of the vehicle can be significantly broadened with the help of vehicle-specific apps certified by the BMW Group, enabling functions such as web radio, GoogleTM Local Search and FacebookTM to be used inside the vehicle safely and in convenience. But that is only the start. The app concept allows the range of functions to be expanded almost infinitely. Updating the app or installing another compatible app brings new functions into the car – without the need for any modifications to the car itself.

“For us, the whole issue of apps is about not only the individual functions inside the vehicle, such as web radio or Google, but also the avenues this opens up to us beyond them. This technology makes our vehicles fit for the future.” (Florian Reuter, Product Management MINI Connected)
A current example of the constant expansion of the apps’ functionality is the new calendar feature of BMW ConnectedDrive. An update for the app enables the actual calendar from the iPhone to be accessed in the car and the diary function of the smartphone to be linked up to the car’s infotainment system. Drivers can now access their calendar on the central information display and even have entries read out to them. 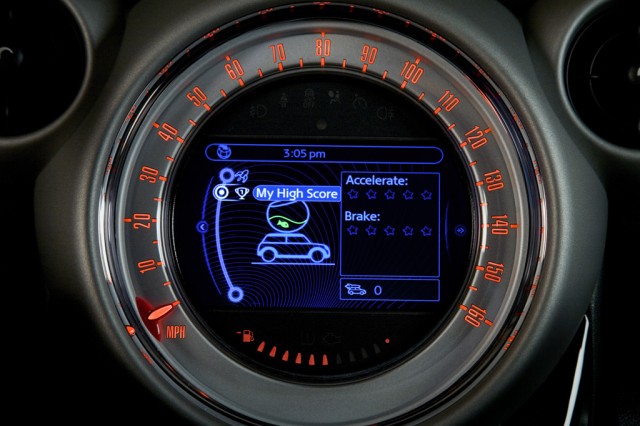 In addition to the special functions it has created itself, the BMW Group is also using the technical capability provided by MINI Connected and BMW Apps as a platform for the integration of services from other providers. These “third-party apps” will allow a host of infotainment functions which customers already use at home to be transferred seamlessly to the car and operated by the driver. And that means they will have access to the services they want – such as personalised music streaming – at all times, whether they are on foot or travelling in the car.

“With third-party apps we’re aiming to give customers the chance to select the provider they prefer, or at least one they are familiar with, for each specific application. In addition, when it comes to new functions through other apps we can, of course, also recommend a provider offering the service they are seeking.” (Andreas Schwarzmeier, BMW ConnectedDrive)

By opening up this platform to apps from other providers, the BMW Group is underlining its leading position in both the integration of mobile devices into its cars and the introduction of internet-based in-car services. Development times are getting even shorter, and the selection of products wider and more customer-specific. And, most importantly, local requirements can be covered to optimum effect by a diverse structure underpinning the available services. In the USA, BMW Apps and MINI Connected customers can already use the popular and cost-free personalized internet radio service Pandora®.
“Our aim for the future is to take our cooperation with premium infotainment providers to the next level in order to give our customers in-car access to the services they already use at home.” (Andreas Schwarzmeier) 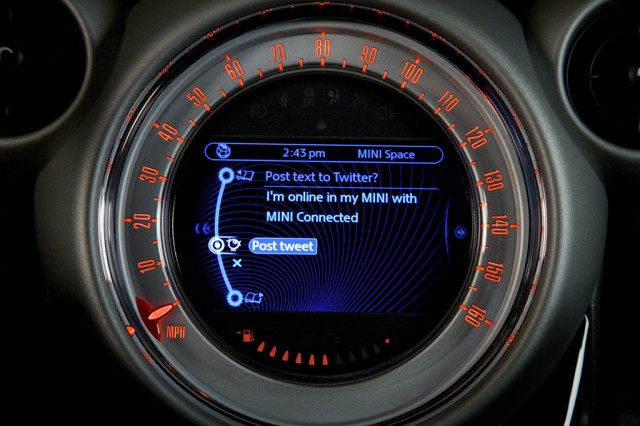 Innovative functions, adapted to the brand.

The flexibility of the local interface is also evident in the brand-specific development of BMW Apps and MINI Connected. Both apps offer access to web radio and Facebook, for example, but MINI Connected also features driving and community-oriented functions such as the MINIMALISM Analyser and Mission Control. BMW Apps, meanwhile, serves the need for seamless functionality and ease of information access with functions such as the integration of the iPhone calendar.

“MINI drivers are different from BMW drivers. That’s why it’s important for us to be able to offer them a specially developed service – in the form of MINI Connected. This also applies to apps from third-party providers. Here we can work effectively with exciting external partners to give customers access to their services inside the MINI.” (Florian Reuter)

The latest version of MINI Connected already offers up to ten different functions, but the developers at the BMW Group are also working on the integration of additional features. As well as the integration of streaming podcast services and virtual travel guides, foursquare® would enable the community area of
MINI Connected to expand to include the link-up with location-based services and social networking. Customers can use foursquare to explore their surroundings or check out a nearby restaurant, for example, and to access any tips the community can offer. They can also see where their friends are hanging out.

“We have a local interface, which can be adapted along individual and customer- specific lines so that every customer – BMW or MINI – can access a set of functions which suit their personal requirements.” (Uwe Higgen, Head of the BMW Group AppCenter in Munich)

The importance the BMW Group is attaching to the area of apps is also reflected in its decision to expand development capacity in this area. The three AppCenters in Munich, Mountain View (California) and Shanghai are working together on the research and development of groundbreaking new applications for smartphones and browser-based technologies. With these three locations linked up closely together, the BMW Group is responding extremely effectively to different customer requirements and the desire for a local range of apps.

The close proximity of the AppCenter in Mountain View to Silicon Valley allows far-reaching insights into and exciting link-ups with highly innovative and creative start-ups, while the AppCenter in Shanghai incorporates the needs of the Asian market into the development process. Working together with the Munich-based AppCenter, they allow the BMW Group to ensure that development keeps pace with the times. The three AppCenters operate as a network, underpinned by identical platforms, technologies and software components. And short development times of between two and 12 months allow a rapid turnaround of high-quality market and brand-specific solutions. The developers are currently focusing primarily on apps for community development, car-related functions, infotainment and location-based services. However, these focal points can be varied and extended to respond to differing brand requirements and objectives. After all, the BMW Group experts are expecting busy times ahead in this area.
Leadership stretching back years.

The BMW Group already has something of a tradition when it comes to taking the lead as an innovator in the integration of CE devices. In 2004 the BMW Group became the world’s first carmaker to allow the Apple iPod to be integrated into the audio system of its models. Indeed, the BMW Group exclusively unveiled the first technology solution for the integration of the iPhone into the infotainment system of its cars just in time for the device’s launch in 2007. Also, since March 2011 the iPod Out function has allowed the familiar Apple iPod interface to be displayed in the car’s on-board monitor and operated via the iDrive Controller or multifunction steering wheel. Since the vehicle can thus access the iPod function of the iPhone directly, BMW also offers customers all the native add-ons for the iPod, such as the Genius function, which searches the user’s music library and automatically compiles playlists of tracks that go well together.