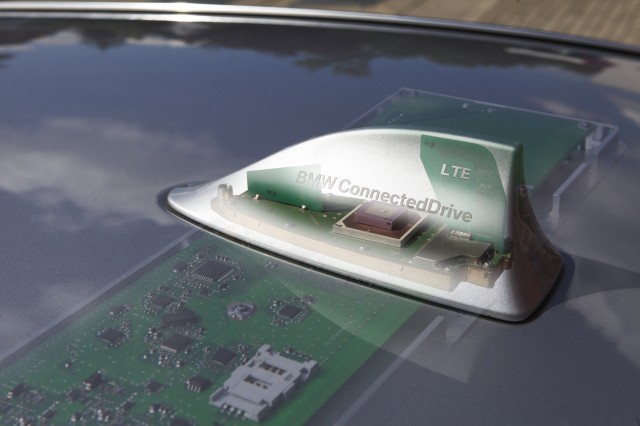 The bottleneck when it comes to in-car technology isn’t processing power or storage space. It’s the speed of connectivity. As we reported last winter BMW is very open about the limits of it’s EDGE connectivity used in current BMW models (currently MINI has no cellular connectivity in their cars). The answer is LTE or true 4G. With LTE being rolled out throughout the world BMW is preparing for the switch as early as 2013 in some markets. Could we see this in future MINIs? We expect BMW to roll out full car connectivity in MINIs as early as the F56 – the next generation MINI hatch – due out in 2013. Whether or not that will be LTE remains to be seen but it would make sense given these new advancements.

So why LTE and not the much more prevalent 3G?

Even 3G has it’s issues with stream quality and latency. The videos are transmitted in low resolution, and inadequate network coverage in some areas can cause problems with video and audio stuttering or dropouts.

These problems will soon be a thing of the past with the arrival of the new LTE (Long-Term Evolution) standard. LTE, also known as 4G, is a fourth-generation wireless standard and the next major technology standard after GSM (2G) and UMTS/HSPA (3G).

The main highlight of LTE is that it combines extremely high bandwidth with very low latency. Whereas UMTS/HSPA can currently achieve theoretical downlink speeds of up to 14 Mbit/s, LTE is around ten times faster. With peak downlink speeds of 150 Mbit/s and latency in the tens of milliseconds, the mobile internet experience provided by LTE is on a par with, or may even surpass, the kind of quality previously confined to home computers with a landline connection. Uplink speeds for this standard will be in the order of 50 Mbit/s. The higher bit rates are achieved by using state-of-the-art modulation and coding methods and multiple antenna technology.

Low latency is a key factor for ensuring high-quality, delay-free operation. Latency is amongst other things a measure of the speed with which the network processes inputs. The extremely low latency offered by LTE is an important enabler for new functions in the car which are supported not by onboard processing power but by backend servers. The combination of low delay times (thanks to the high transfer speeds) and high backend computing power also brings data-intensive cloud applications ever closer. The delegating of processing-power-intensive operations to high-performance backend servers so that the necessary computing power does not have to be available on board the vehicle also reduces space requirements and therefore offers scope for reducing vehicle weight and energy consumption.
LTE also provides better area coverage than previous mobile phone networks, since it can operate not only in the high-frequency 2.6 GHz range but also at low frequencies in the 800 MHz range which have better physical propagation characteristics. The high bandwidth is therefore also available when travelling at high speeds. So LTE can continue to offer high-speed internet access even on motorways and main roads.

Another feature of LTE is the possibility of prioritising specific data packets. For example, the new backend configuration makes it possible to give highest priority to services which must not be interrupted, in order to increase the probability of continuous transmission. This would have particular advantages for safety- related functions.

Efficient use of air interface.

“LTE makes much better use of the air interface. Over-the-air data traffic can be managed far more efficiently with this technology.” (Dr Michael Schraut, Head of the Information and Communication Team, BMW Group Research and Technology)

Another first for LTE is the use of multiple antenna systems, that is to say two physically separate transmitting (and two receiving) antennas operate on the same frequency at the same time. The different streams can be identified by their different signal paths. Known as MIMO (Multiple-Input Multiple-Output), this principle provides the high reception performance necessary to support high bit rates. In the research prototype developed by BMW Group Research and Technology, the LTE antennas are integrated in the typical BMW roof fin.

LTE in the car.

The big challenge when it comes to in-car LTE application is to ensure that LTE’s advantages of faster transfer speeds, combined with sufficient bandwidth and spectral efficiency, continue to be maintained while the vehicle is on the move. Peak bit rates will not be available at every point on the route and there may be wide variations depending on factors such as the position of the vehicle in relation to the stationary transmitter, or line-of-sight conditions. The on-board reception systems must be designed to compensate for signal fluctuation in the moving vehicle and also for Doppler shifts.
BMW Group Research and Technology is therefore conducting intensive research, in parallel with extensive live testing, to evaluate the performance of LTE in in-car applications. The live tests are being carried out in urban conditions in Munich and in the surrounding rural area. The focus is on evaluating parameters such as transmission characteristics, latency times and transfer speeds under real-world conditions. Initial promising results show peak download speeds of up to 70 Mbit/s, with average speeds of 23 Mbit/s in town. Overall, the tests show significantly improved area coverage combined with the improvement in bit rates.

The services already offered by BMW ConnectedDrive can benefit greatly from the improved speed, performance and area coverage offered by LTE. Server- based services such as video or music streaming to the car will become more attractive thanks to the high bandwidth and low latency offered by LTE.
BMW Group Research and Technology is also investigating other application scenarios – for example outsourcing of traffic sign recognition to backend servers. The front-mounted camera would scan the signs and stream the information via LTE to the backend server. There an algorithm would identify the signs – including new, unfamiliar ones – and send back the relevant information to the vehicle. This would provide a simple and convenient way of keeping this driver assistance system state-of-the-art and abreast of new traffic signs throughout the life cycle of the vehicle.

When will LTE be here?

That question is quickly answered: LTE is here already. It is now available in?20 countries via 29 commercial networks. In the USA, the first LTE-capable smartphones are already on the market and some operators both in the USA and in Germany are predicting that LTE will be as big as the current UMTS network as early as 2013. The better area coverage means the high bandwidth will also be available when travelling on motorways and main roads. As soon as these goals in terms of availability and area coverage are realised, the BMW Group will be excellently positioned to take its in-car BMW ConnectedDrive services to a new level.

Official Video of MINI at the Detroit Autoshow