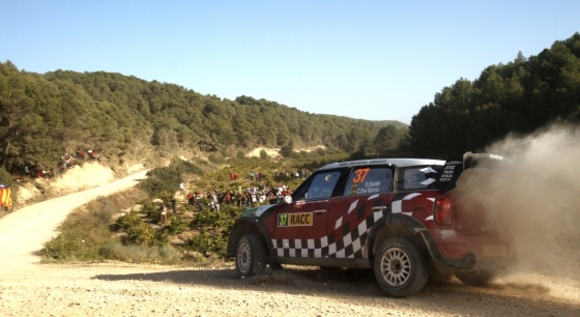 After a day at the Rally of Spain the MINI WRC duo is running a respectable 4th and 5th place. But Sordo (who’s in 4th) is going on the attack Saturday morning, following Friday’s frustrations in the dust. As the teams head to the service break, Dani has consistently made up ground on Mikko Hirvonen in third place.

Special Stage 9: Hirvonen once again loses time to Dani and Carlos: 2.6 seconds on the final stage before the service break. “The MINI WRC feels very good,” says Dani. That is clear to see, as Dani and Carlos set a fast pace. The pair is now just 46.8 seconds off third place.

Special Stage 8: Dani continues to put Hirvonen under pressure and shows the Finn that he will have to fight all the way to hang onto his podium position. Dani makes up six seconds on Hirvonen on the morning’s second stage, reducing the deficit to 49.4 seconds.

Kris is just a few seconds slower than Dani on this stage, but has to make way for Sébastien Ogier, which costs him a place in the overall standings. Kris now lies in sixth place overall.

Special Stage 7: Following the dusty Friday, Dani and Carlos are pumped up as they line up on Saturday morning. The pair sets the third fastest time on the longest stage of the rally and also benefits from a puncture for Ogier. This sees Dani and Carlos move into fourth place overall, 55.4 seconds behind Hirvonen in third place.

Kris and Paul also set a fast time on the 45-kilometre special stage, crossing the finish line as fifth fastest. Like Dani and Carlos, the duo moves up a place into fifth overall.