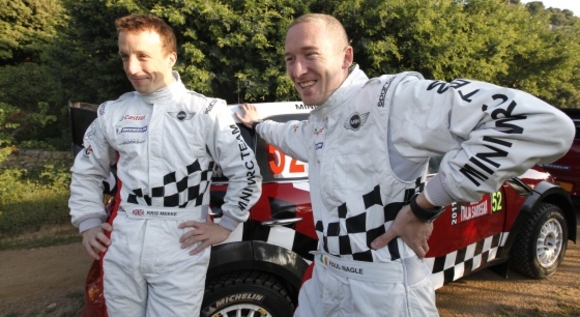 MINI Motorsports News caught up with MINI WRC driver Kris Meeke and co-driver Paul Nagle about their outlook for the 2012 season. With two podium finishes, it’s been a very strong first season back in rally racing. As the team prepares for next year’s races, MINI fans are as hopeful as Kris and Paul appear to be. Full interview after the jump.

Can you believe that your maiden WRC season is already over?

Kris: We did not start until Rally Sardinia in May and had another two-month gap before Finland, so we had to be a bit patient at the beginning. Of course, a driver wants to compete in all rallies. In the final part of the season, our pace was getting better and better.

Dani had two podium finishes, you won the power stage in Spain and almost finished 3rd at the Rally GB, so you must be satisfied with the way the season progressed.

Kris: It was a good season. I don’t think anybody expected us to get such good results. Dani’s podiums on tarmac, in particular, were definitely ahead of where we thought we would be this season. As for Paul and myself, coming back from 11th overall to battle for third place up to the very last stage at the Rally GB was also great. So hopefully we can battle for more podiums in the future.

From the start it was a learning year for the MINI WRC Team, but also for the two of you, as you basically had to write your pace notes from scratch at almost every rally. As there are 13 rallies scheduled for 2012, there is more work to be done.

Paul: Yes, it will be mid-season next year before we return the rallies we contested this year. We have been to Monte Carlo, which will be the opening rally of the 2012 season, and have also visited a couple of other rallies this season where we already gathered some recce information. However, many rallies will be new territory for us again next year.

At the same time, driving many rallies on brand-new pace notes never prevented you from being fast this year either.

Kris: Well, some of the stages were new to everybody else too. We were a bit further down on some of the stages in Finland and Germany that had been used many times before, but with the results that we got this season in general I don’t think we could have asked for much more.

What were the highs and lows of the season?

Kris: Winning the power stage in Spain was definitely a high for us. The low was certainly France, when we crashed at a point when we were probably going for a podium finish. This was disappointing. But we certainly learned from that rally, bounced back from it and ended the season with two good finishes.

You said that you bounced back from the setback in France. Actually, it seemed as if you were starting with a whole new, more relaxed approach to the rallies.

Kris: Generally speaking we wanted to approach every rally in the same way and learn from it. But in France we were running inside the top five before we crashed out. So we learned from that too. In Spain we did not have the pressure on our shoulders anymore and were able to enjoy the rally a bit more, which worked very well for us.

Is that also going to be the way you approach things next season?

Kris: Rally Monte Carlo and Rally Sweden are going to be very difficult and it is easy to make mistakes there. Then it is Mexico, which is all new to us. So yes, we will be taking a similar approach to the start of next season.

Now it is the off-season. What are you going to be working on?

Kris: For the next four or five weeks we will be working on getting ready for Monte Carlo. Plus, right after Christmas, we will do another test. Then it is a case of getting the recce preparations ready, discussing things with Dani and Carlos and the rest of the team. It is also important to stay in shape because after Monte Carlo the rallies come one after the other. So we have quite a bit of work to do.

Paul, communication is so important during the rallies. Anything you are looking to work on here?

Paul: No, we are setup and ready to run. The communication in the car works perfectly, the team is doing a great job on the radio and we have the latest technology on the intercom. So this is all fine.

So what do you personally expect from next season?

Kris: We are looking forward to putting everything in place to have a successful season. We will develop the car a bit more. We will gain some more experience. So I hope we can be challenging for a top place on the podium. But it is not going to be easy to do that at world championship level. I think we need to get back to the rallies we know from this year, where we were already strong, and to get top results there. To do this, however, we must first get all the bits and pieces in the right place.

Speaking of the MINI John Cooper Works WRC, was the initial positive impressions of the car that you got from all the preseason test drives confirmed by its performance during the rallies?

Kris: With the MINI WRC it was also a learning season for us. And you only know how good you are when you put yourself up against the opposition. This is the only thing that counts. We had minor technical issues this year, but the team very quickly got on top of this. During the final three rallies both cars proved to be very reliable and fast. If we push our overall performance a bit more, we will have another successful season.

Video: The Legend is Back