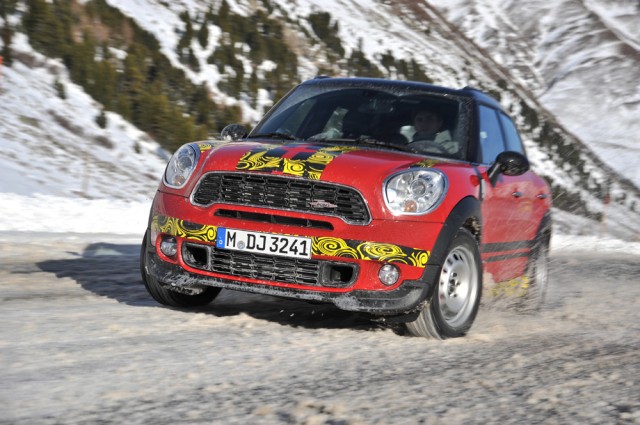 The cars of MINI’s John Cooper Works sub-brand are often described as halo models. They are intended to be each MINI in its purest, most sporting form. While perhaps not as aggressively separate as BMW’s M division, the JCW cars have always been a good balance of power and performance without sacrificing reliability. For those willing to pay the premium, the JCW cars offer that little bit extra on already brilliant cars. Since the Countryman’s introduction, many have wondered (myself included) if the R60 would also come in a JCW flavor.

Wonder no more because, as the photo above suggests, we now know the answer to that question. The JCW Countryman All4 will be introduced at Geneva early next year and it will make its way here in the second half of 2012. More significant, however, are the particulars. As we’ve previously reported here on MotoringFile, the JCW Countryman will feature a newly refreshed version of MINI’s highly tuned 1.6L turbo Prince engine, featuring Valvetronic variable valve timing. As with the 2011 engine refresh for the standard Cooper S power plant, the addition of Valvetronic will stretch the engine’s power output and likely up its efficiency by significant percentage points.

This week in Innsbruck, Austria, I got to experience the JCW Countryman prototype first-hand with what I’m very confident was an early version of this new engine. Our preview of the JCW Countryman actually began with a different JCW MINI: the Coupé. I was given the fob to one of three JCW Coupés shod in fresh, sticky Blizzaks, and told to follow the JCW Countryman prototype driven by Heinz Krusche, the head engineer for BMW’s Driving Dynamics division. (Driving Dynamics is the group responsible for the DSC, DTC, xDrive and All4 systems for both BMW and MINI.) Our task was to try to keep up with the JCW Countryman All4 on the snowy alpine roads of central Austria. The contrast would prove very interesting.

Even with snow tires, the JCW Coupé was a little bit of a handful in the snow. As MINI’s most tail-happy car to date, navigating the windy mountain roads with any speed at all was difficult. It was easy to make progress, and the JCW Coupé had great traction at slow, conservative speeds. But go any faster and I was pushing my luck. Absolute concentration was required to carry any speed into a slippery alpine turn — paying very special attention to the car’s balance. Let off the throttle to late or too hard into a turn and I’d risk bringing the rear end around. If I gave it too much throttle, even up in 3rd gear, the torquey JCW motor would break the front wheels loose and the car would twitch hard and understeer. Even if the grip held, there was the snow induced torque-steer to contend with as well.

The car was perfectly capable of navigating the steep, slick roads, but not in a way that was any fun. After a quick ten minute run down the mountain and back up again, it was time to shuffle seats.

Kicking the snow off my boots, I climbed into the co-driver seat of the JCW Countryman with Herr Krusche. The drive down the mountain was more of a presentation of the car and the All4 system. At the bottom, we would switch seats and I’d drive the car back up to the staging area. He described the All4 system in detail, actually correcting some of our previous information from other sources from MINI at the original R60 launch. He’d definitely be the man to ask, as one of the primary developers of the system. More on that here. While he wouldn’t answer specifics about the new engine, I did learn some other interesting key facts. The JCW Countryman will come standard with the otherwise optional Sport Suspension. The car gets 10mm lower, the front sway bar grows 2mm over standard and the rear sway bar grows by 1mm. Also standard will be 17″ wheels. Additionally, the rear wheel base has been widened by a few millimeters to take advantage of the JCW’s increased torque output. Dampening and rebound rates are the same as the Sport Suspension you can get on the Countryman today. And before you ask, no, there will not be a JCW-labeled specific suspension kit for the Countryman that goes beyond the settings of Sport Suspension. After driving the car, I agree with Heinz that it just isn’t necessary. The Countryman simply isn’t meant to the a race car, but it can be driven very, very aggressively on the Sport Suspension with good results. My drive was brief, but informative. Tearing up the mountain I was relieved to find the clutch engagement point in this JCW Countryman prototype was not at the high, bothersome place it is in the MF Countryman Cooper S All4. The clutch was nice and light too, and made for smooth shifting. The otherwise untouched All4 system tore through the snowy alpine roads with absolutely no trouble. There was no torque steer, no drama, just grip and power. The 17″ wheels mated to the Sport Suspension made for both a comfortable ride and sporting handling. Nothing new there. I had the exact same experience in the Cooper S and Cooper SD Countryman All4s I’d been driving earlier in the day. The difference in the JCW Countryman, obviously, was the power.

I couldn’t get official confirmation that the engine in this JCW Countryman prototype was in fact the new Valvetronic refresh. But driving it back-to-back with the JCW Coupé, I’d be extremely surprised if it wasn’t. There was more power there, I’m guessing somewhere in the neighborhood of 220hp. The power band was also smoother, very reminiscent of the before and after for the Cooper S engine refresh for MY 2011. The JCW Countryman positively galloped up that Austrian mountain road. While the Cooper S Countryman All4 is no dog, the JCW Countryman is properly quick. Some rumored numbers have the 0-60 times well under seven seconds. I can believe it. Even on snow the JCW Countryman had plenty of power to spare, and thanks to All4, could put all of it to good use. 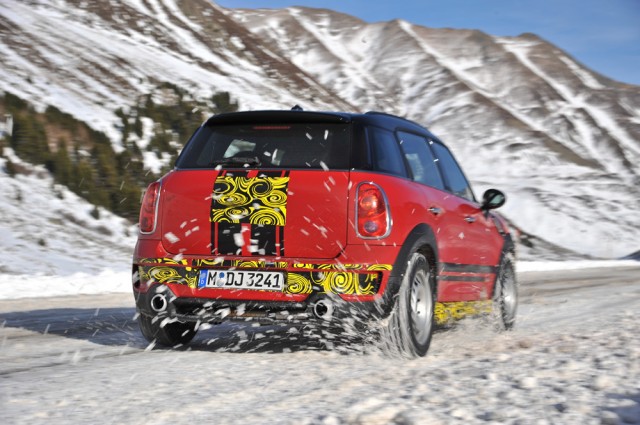 I hope to conduct a longer, more exhaustive evaluation on the JCW Countryman in the future, but in what brief time I got to spend with the prototype, I can say this: the JCW version of the R60 finally feels right. The car feels like it has all the power it needs to not simply get out of its own way (which the Cooper S Countryman does very well), but to finally be driven in anger. It’s got the horsepower and more importantly the torque to make the Countryman All4 a properly aggressive car to drive, even in the snow. With Sport Mode on, the sharper throttle response didn’t make the car unruly, it simply made aggressive snow driving that much more fun — which is a testament to just how good the All4 system really is on these kinds of roads. Bottom line, the extra power made the JCW Countryman finally feel like it had the power the R60 deserves. On dry pavement, it ought to be even better.

I say that with one caveat, however. Keep in mind what the JCW Countryman is intended to be. This is not an STi killer. It’s not a street version of the WRC rally car. Prodrive had nothing to do with this. The JCW Countryman is simply the most powerful, most refined, most holistically high-performance version of the Countryman that MINI intends to build for the masses. It’s the school run on steroids. While that sounds a little watered down, I can tell you that, from behind the wheel, it isn’t. Like the rest of the JCW lineup, it’s that little bit more. It’s that extra injection of performance that places it not in the stratosphere, but definitely on another level above its Cooper and Cooper S siblings. In fact, the closest performance analog in the current MINI family would be the Countryman SD, which isn’t available here in The States. The torque, as well as the horsepower coming out of that MINI Challenge-bred JCW mill gives the car the kind of grunt I think it’s needed all along. In a word, the car is finally correct. Beyond the performance gains, expect the normal JCW touches such as the red roof, subtly more aggressive body styling details, and interior touches like dark gray gauge faces to make their way into the production JCW Countryman. They were all there (minus the red roof), albeit barely camouflaged on the prototype. More importantly though, if you’re looking for that extra burst of power over the Cooper S Countryman All4, you’ll find it in the JCW. It feels the most “MINI”, the most aggressive and as high-performance as the Countryman really should feel. The prototype was rather grin-inducing, just like a MINI ought to be. Look for the final production version to debut at Geneva, with the car going on sale in the second half of 2012.

Side note: After experiencing what was likely the new JCW engine and how handily it propelled the relative bulk of the Countryman, I cannot wait to experience that power in the smaller, lighter R5x MINIs.

NYT: Taking MINI to the Max