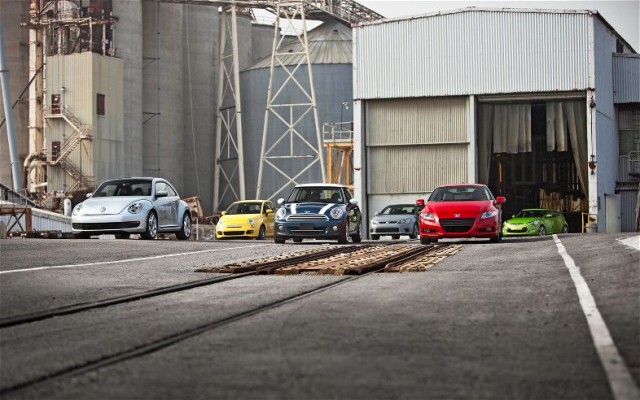 We love a good comparison test here at MotoringFile, especially when the MINI gets its due as a driver’s car – especially the Cooper. While MINI doesn’t always come out on top in these small car shoot outs, it’s always interesting to see how the automotive press compares the Cooper to its rivals. This month, Motor Trend published a story pitting the MINI against the Scion tC, Honda CR-Z, Volkswagen Beetle, Hyundai Veloster, and of course, the Fiat 500. These, as the misfit group of the automotive world — the odd balls. Spoiler alert, MINI came out on top.

If you haven’t heard, MINIs are really fun to drive. That doesn’t just apply to the turbocharged S model, either. Much to our delight, the base MINI is no penalty box. Instead, it was the unanimous winner. Despite being one of the least-powerful cars here, the MINI laid down the second-fastest 0-60 time and the best stopping and skidpad performance by far, and still pulled off the second-best observed fuel economy, losing to the hybrid CR-Z by a tenth of an mpg. To top it off, despite a well-earned reputation for pricey options, the MINI wasn’t the most expensive car here.

It’s refreshing to see someone outside the enthusiast community recognize the sweet spot the MINI lands in. Speed, cornering, style and fuel economy. Look outside the MINI brand, you usually end up compromising something. You’ll trade economy for speed, cornering for more ride comfort, or simplicity for character. But the one thing that we were happy to see mentioned is the steering. Within the MINI Community there’s been some complaints about the current generation’s electric steering versus the previous. While we’ve always maintained there’s about a 10% loss of feel, it’s still one of the best front wheel drive systems out there for feedback, weight and control. And it would seem Motor Trend agrees as well.

Of course, it’s not all praise. Motor Trend had the typical car tester complaints when it comes to the MINI.

Of course, there are some drawbacks. You either love or hate the MINI interior, and its oddball ergonomics had more critics than defenders. Detractors conceded you’d probably get used to them. There’s also the issue of the cargo capacity, or lack thereof. The smallest trunk of the bunch (yes, even smaller than the Fiat’s) came under fire for its serious lack of practicality, but the tradeoff of useable back seats helped offset it.

As often happens, the MINI came out on top because of its driving dynamics. The things that make the MINI what it is aren’t in the specs you find on paper. It’s the experience behind the wheel.

The MINI won, of course, with its driving. The one-two punch of smart gearing and a thick power band make the most of the available power, and they’re accessed via a precise shifter and well-positioned pedals. The real magic comes from the solid chassis, sport-tuned suspension, and direct, communicative steering. To be fair, our tester was optioned with larger wheels and better tires and an electronic limited-slip differential, but these wouldn’t affect the handling enough to take the MINI out of first. MINI’s dedication to the driver pays off in handling that trounced the field, albeit at the price of a harsh ride on rough pavement. Unlike some other contenders, though, you feel like you’re getting something in return for your chattering teeth.

Check out the full story, included how the rest of the competition faired in the hands of Motor Trend’s drivers over at their website.