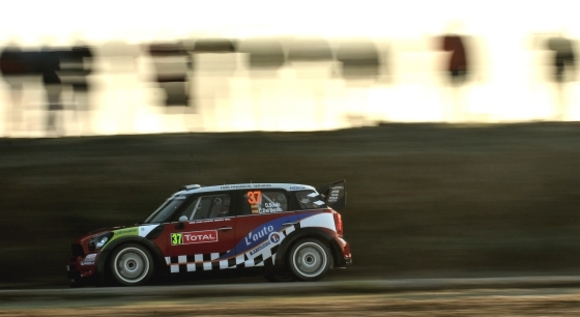 Official Release: After a challenging start to the Rally Monte Carlo, Dani Sordo put in an excellent performance on the second loop of stages to secure a good starting position on day two.

Special Stage 4: The first pass suggested the stage would become increasingly challenging as various crews experienced difficulties with the icy conditions. So it proved on the second run, with the leader after the morning loop, Jari-Matti Latvala, sliding off the road and rolling out.

By contrast, Dani Sordo mastered the section almost perfectly. The third-fastest stage time enabled the driver of the MINI John Cooper Works WRC car number 37 to move into a provisional second place overall. “The second pass was a lot better than this morning,” said Dani at the finish. “The car had a good balance, everything was okay.” Thus Dani lays 1:04.2 minutes adrift of Sébastien Loeb, who heads the field ahead of the Monte’s second day.

Pierre Campana, too, improved in the afternoon, moving the number 52 MINI WRC up from tenth place to eighth overall. Privateers Armindo Araujo and Paulo Nobre – both in a MINI WRC – occupy 14th and 27th places respectively.

Special Stage 3: The fourth-fastest time after the service break secured a front-running place for Dani. He suffered no residual problems after a minor excursion on the second stage after the MINI WRC Team’s mechanic put in some sterling efforts. Pierre recorded the seventh fastest time to hold the same position overall.

Special Stage 2: The second special stage was a tough one with the final eleven kilometres going downhill covered with lots of ice and snow. Almost everybody has problems here. Except for Jari-Matti Latvala who seems to rise above the adversity. He finishes 30 seconds ahead of Sébastien Loeb heading into an early service break.

Both Dani and Pierre wrestle with the difficult stage conditions. Dani brakes too late going into a right corner and hits the entry of a bridge which damages his left rear wheel. In spite of this he still posts a good stage time while finishing sixth. Overall he is fourth.

Pierre spins in the first section of the stage and loses circa 15 seconds. He finishes 14th on special stage 2 and is tenth overall heading into the brake.

Special Stage 1: Superb start into the Rally Monte Carlo for Dani. On the 36+ kilometre opening special stage he is only a second behind Loeb who sets the best time. “I could have been quicker,” says Dani. “For four kilometres I have been waiting for an icy spot. But it just was not there.”

Meanwhile Pierre has a good first run for the MINI WRC Team in his MINI WRC car number 52. With only 40,2 seconds behind Loeb he scores the sixth quickest time.

During the course of Rally Monte Carlo, Twitter.com/MINImotorsport will carry all breaking news items about the MINI WRC Team.