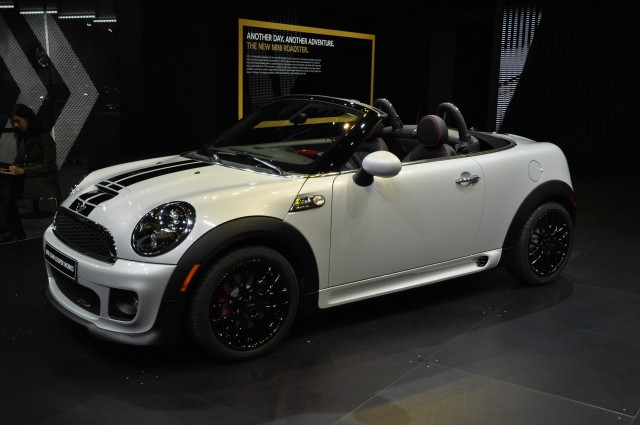 At the NAIAS this year in Detroit, MINI featured the new Roadster — their latest addition to the MINI model lineup. For those keeping score at home, that brings the total number of unique MINI configurations up to six:

Count the production version of the Paceman concept due out next year and that total climbs to seven. However, MINI is far from done at lucky seven. Dr. Kay Segler, head of MINI worldwide gave the the automotive press the magic number of ten MINI models by the end of the decade. What could those other three models be? Regular MotoringFile readers already know most of the answers. We know of several projects specifically that MINI has had in the works for some time now. Firstly, there’s the city car. Not to be confused with the Rocketman concept itself (although there were surely key learnings there), MINI has long wanted to go back to its genuinely small roots and show microcars like the Smart what a real small car can be. Recent rumors have MINI possibly sharing some platform elements with Toyota’s iQ, although we’ll believe that when we see it. Will the MINI City be model number eight? Code-named “Spacebox” and known as the Traveller (or even the MINI Activity Tourer) the car will be based on the front wheel drive BMW Compactive Sport Tourer or ‘FAST’. The idea (for both but especially the Traveller) is all about increasing practicality and flexibility for a customer who would have had to to move to another brand because they’ve simply run out of space. Both but especially the Traveller will be the most utility oriented of all of BMW or MINI’s upcoming products based off of the UKL1 platform. That makes nine. We’re not entirely sure what’s up MINI’s sleeve for model #10. Every once in a while, we hear something new about the Beachcomber or even a three-door variant called the Canyon. This original Countryman derivative predated the production Countryman itself. Taking its inspiration from the Moke of old, this open air beach-mobile falls into “just crazy enough to work” territory. Modular doors and lots of open space could let you take the MINI experience out of the city and possibly well off the beaten path. Could MINI push that much closer to a legitimate small trail vehicle to challenge the Range Rover Evoque?

We’re only able to speculate at this point, but with the next generation hatch sharing so much more with parent company BMW, the cost savings and deeper development will likely mean a greater variety of MINIs is that much more financially viable. With such common underpinnings, and heavy investment from BMW, these kinds of variations are not only possible, but likely profitable. So even if models like the Spacebox aren’t your cup of tea, chances are MINI will have something in its lineup that is right up your alley.

Anthracite Headliner to be Phased Out in US