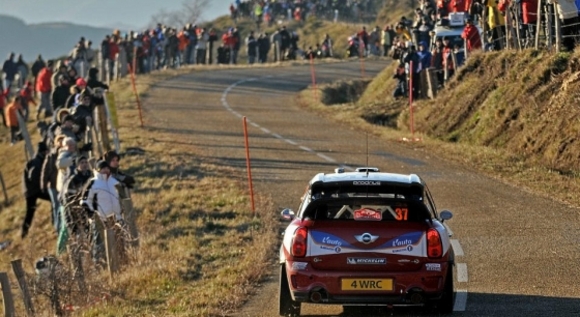 After a somewhat tumultuous off-season for the MINI WRC team that saw its driver line-up cut in half, Dani Sordo managed to bring the WRC Countryman all the way up to 2nd place after a grueling Monte Carlo rally.

Official News via MINI Motorsports: The second place overall scored by Dani Sordo and co-driver Carlos del Barrio on the Rally Monte Carlo means the MINI WRC Team has kicked off its 2012 campaign in style.

The MINI WRC Team continued seamlessly into 2012 after scoring two promising podium places during its 2011 learning and preparation year by impressively announcing its presence in the 2012 World Rally Championship. Dani Sordo in the number 37 MINI John Cooper Works WRC emphatically proved the performance of the car in the classic Rally Monte Carlo with a fine second place, simultaneously underscoring the winning spirit which reigns within the entire MINI WRC Team.

On the last special stage of the Rally Monte Carlo Dani Sordo ensured a perfect start to the season for his team. With the fourth fastest time on the 5,16 kilometre Powerstage he secured second place overall, having successfully fended off the advances of protagonist Petter Solberg, who had set three fastest times on the previous day to close within 19,1 seconds of Dani. At the finish Dani’s advantage over Solberg amounted to 28,7 seconds, with Sébastien Leob taking overall victory.

“To score a podium place on the Rally Monte Carlo is always something special,” said Dani at the finish. “We had to push hard towards the end, but the result proved well worth the effort.” After places three and two on last season’s Rallys Germany and France respectively, this result marks Dani’s third podium for the MINI WRC Team, bringing his career total to 32 in 92 starts. He has scored 19 second places, and 13 third overalls.

Team principal Dave Wilcock, too, was delighted by the performance delivered by the team on the opening round of the new WRC season. “We are very pleased with this result, and it is pretty special to come second in the Rally Monte Carlo with the MINI John Cooper Works WRC, particularly given the brand’s very successful history here,” said Wilcock. In the 60s the “Three Musketeers”, namely Paddy Hopkirk, Timo Mäkinen and Rauno Aaltonen, claimed three Rally Monte Carlo Rally victories with the classic Mini Cooper S to create a sensation in international rallying.

“Well done to Dani and Carlos. they did a great job,” added Wilcock. “Pierre and Sabrina delivered a good, solid job too. The team has worked hard. This means that their success is well deserved.” Pierre and his co-driver Sabrina de Castelli made their debut for the MINI WRC Team with the number 52 MINI WRC after Pierre made his WRC debut on the Rally France, placing a classified ninth overall on home soil in a privately-entered MINI.

Two privateer MINI WRC crews also celebrated positive results on the Rally Monte Carlo. Portugal’s Armindo Araujo finished tenth for his own WRC team to score a point in the opening round of the championship. Brazilian Paulo Nobre placed a classified 20th for Team Palmeirinha Rally in his MINI WRC.