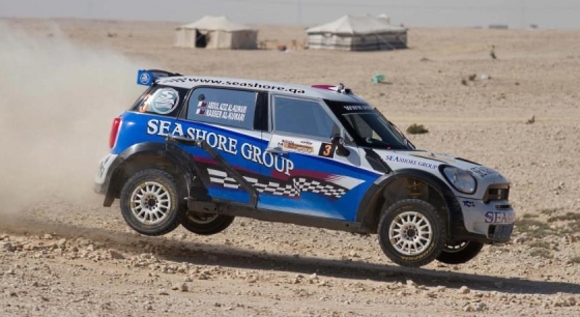 It may not be the WRC but MINI has recorded it’s first FIA sanctioned rally win in over four decades with a win at the Qatar International Rally this past weekend. Adbulaziz Al-Kuwari piloted the MINI John Cooper Works Countryman S2000 to a outright victory by over two minutes. A huge MotoringFile congrats to the team!

Official Release: Abdulaziz Al-Kuwari left the opposition in his wake on his first outing with his new MINI John Cooper Works S2000. The man from Qatar claimed overall victory at the Qatar International Rally.

Even with the opposition breathing down their necks, Abdulaziz Al-Kuwari and his co-driving brother Nasser Al-Kuwari never lost sight of their goal at the first round of the FIA Middle East Rally Championship (MERC) and refused to be knocked off course for victory. Driving his new MINI John Cooper Works S2000, Al-Kuwari eventually finished an emphatic 2:24.9 minutes ahead of runner-up Nasser Saleh Al-Attiyah in Doha’s desert.

“It is a fantastic feeling to win this rally,” said Al-Kuwari. “I have achieved success in national rallies in Qatar, but this was the big one. This was the rally I wanted to win. The new car was fantastic. This is the biggest win of my career.”

Al-Kuwari started the second day of the rally with a lead of almost five and a half minutes, but Al-Attiyah – winner of the 2011 Rally Dakar – produced two good special stages early on, which propelled him from fifth to second place overall. That brought Al-Attiyah to within striking distance of Al-Kuwari’s MINI. However, Al-Kuwari launched a brilliant counter in his new MINI S2000 on the tricky final stage to secure overall victory. Third place went to the Lebanese driver Nick Georgiou.

Al-Kuwari, who drives as a privateer for the Turkish Tok Sport team, only received his MINI S2000 in December. He is currently the only MINI representative in the MERC, in which a further six rounds are scheduled before the end of November. The next event is the Kuwait International Rally on 22nd March, where Al-Kuwari will be keen to show that his victory at the opening race was more than just a flash in the pan.