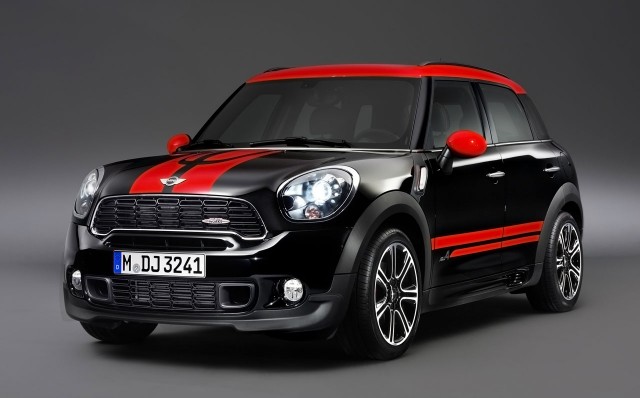 The JCW Countryman signals a subtle but important change in the JCW brand. Gone is the softer, standard suspension and in its place is a sports suspension tuned specifically for this car. Then, there’s the engine — complete with BMW’s Valvetronic and a sizable increase in torque and throttle response. This coupled with the JCW’s standard All4 all wheel drive system gives the JCW Countryman a unique place in the JCW range and perhaps even a sign of things to come for the rest of the lineup. We had a chance to drive the prototype of this car back in December, and for those looking for a more powerful, sporting MINI 4-door, your car is about to arrive.

[Official Release] The MINI family is constantly expanding, and new additions have also been made to the range of John Cooper Works models available to customers. For the first time, MINI racing-inspired thrills can be experienced in combination with all-wheel drive. The global introduction of the MINI John Cooper Works will get under way in autumn 2012. 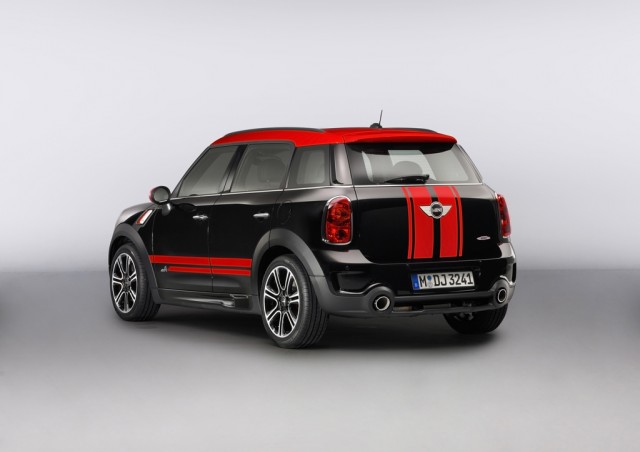 With powertrain and chassis technology developed calling on the brand’s vast motor sport expertise built into the first MINI with five doors and four/five seats, MINI will deliver its John Cooper Works presence in another new segment… complete with all of the customary handling characteristics and sporty appearance the brand is known for.

The Countryman, MINI’s first five-seater, already shares the racing genes which define the character of every MINI, and now the John Cooper Works polishes these inherent talents to really shine. The new engine brings another hike in output, transferred onto the road with impressive style by the MINI ALL4 all-wheel-drive system. The John Cooper Works suspension ensures every change in direction is imbued with addictive agility. The MINI John Cooper Works sprints from 0 to 62 mph in 7.1 seconds. While U.S. fuel economy figures are not yet available, average fuel consumption of 7.2 liters per 100 kilometers / 39.2 mpg imp in the EU test cycle represents an outstanding return when you consider the performance on offer (automatic transmission: 8.0 liters/100 km and 35.3 mpg imp). Note: performance and fuel consumption figures are provisional. 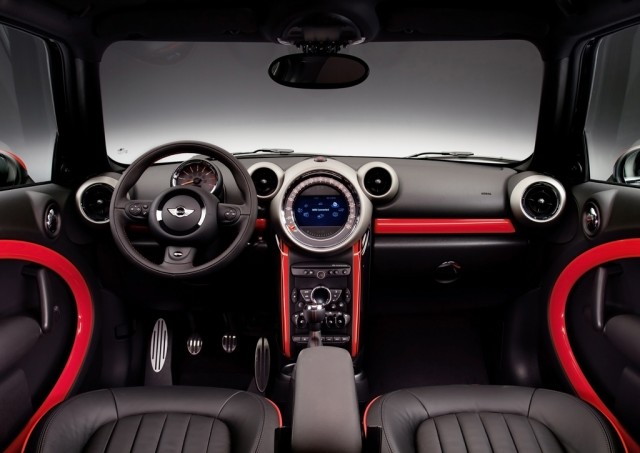 The distinctive style of the sixth John Cooper Works model in the MINI line-up is also expressed through the car’s design, including the exclusive selection of paint finishes, light-alloy wheels and interior materials available for order. The MINI John Cooper Works Countryman is equipped as standard with an aerodynamic kit, 18-inch light-alloy wheels, a sports exhaust system with chrome tailpipes and door sills bearing the John Cooper Works logo. The color Chili Red can be specified as a contrasting paint finish for the roof and exterior mirrors. And Chili Red flourishes for the interior, such as in the exclusive design of the sports seats, also add a distinctive flavor to the sports car ambience carried over from the other John Cooper Works models.

The most powerful member of a new generation: the engine in the MINI John Cooper Works Countryman.

The motor sport roots of John Cooper Works are reflected in a constant thirst for new performance benchmarks. This ambition has inspired even more power from the new four-cylinder engine in the MINI John Cooper Works Countryman, as well as ensuring further gains in efficiency. The latest generation of the twin-scroll turbocharged engines benefit from both direct injection and a variable valve control system based on the BMW Group’s VALVETRONIC technology. This throttle-free load control development significantly improves both the engine’s responsiveness and its efficiency. Reinforced pistons and intake valves, and further optimization of the cooling, air supply and exhaust gas discharge system, enable further increases in output and torque. Added to which, the 1.6-liter engine’s turbocharger is given a particularly large intercooler. 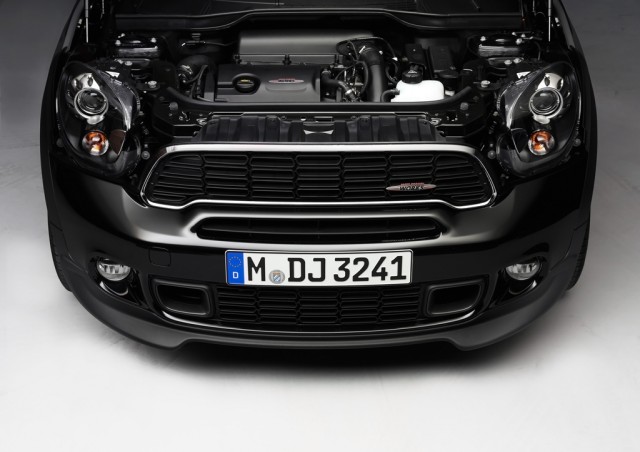 The MINI John Cooper Works Countryman’s engine reaches its maximum output of 211 hp at 6,000 rpm and generates peak torque of 207 lb-ft between 2,000 and 5,600 rpm. The Overboost function briefly pushes this figure up to 221 lb-ft between 2,100 and 5,200 rpm. The sports exhaust system – its slanting tailpipe embellishers providing an extra dose of the hallmark John Cooper Works design – gives this outstanding power delivery the one-of-a-kind soundtrack it deserves. All-wheel drive and an automatic gearbox are both offered for a John Cooper Works model for the first time in this vehicle. The MINI John Cooper Works Countryman is the first model to send the extreme output from its motor sport-inspired engine through all four wheels.

The new car’s ALL4 all-wheel-drive system uses an electromagnetic center differential to distribute drive seamlessly between the front and rear axles. This ensures the engine’s power always finds its way to where it can be converted most effectively into forward motion. In normal driving conditions, the MINI’s intelligent ALL4 system directs all of the engine’s power to the front tires, and up to 50 percent of its power can be diverted automatically to the rear wheels when driving conditions require it. This provides a traction-led expression of the handling talents for which MINI is famed, ensuring maximum directional stability and dynamic performance whatever the weather and road conditions. Together, the engine’s imposing power and the added John Cooper Works technology employ to harness it lay on a full-blooded brand of driving fun.

The market launch of the MINI John Cooper Works Countryman is complemented by another MINI powertrain premiere, the introduction of an optional six-speed automatic gearbox for John Cooper Works customers as an alternative to the standard six-speed manual. Detailed tweaks have been made to both the gearboxes themselves and the clutch for the manual variant to take into account the extra engine power, and ensure outstanding performance and efficiency. The manual and automatic versions of the MINI John Cooper Works Countryman accelerate from 0 to 62 mph in 7.1 and 7.5 seconds respectively on the way to a top speed of 127 mph. 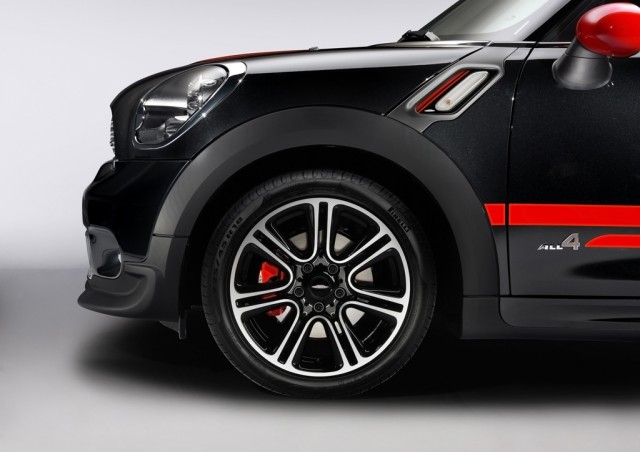 Pressing the likewise standard Sport Button tweaks the engine responses, the character of its soundtrack and adjusts the power assistance provided by the steering.

The muscular front and rear aprons and bespoke side skirts of the standard specification aerodynamic kit ensure visual impact and optimized airflow. Customers can choose from seven colors for the exterior paintwork. A contrasting paint finish can be specified for the roof and exterior mirror caps – in the Chili Red shade exclusive to John Cooper Works models, as well as Light White and Jet Black. Also available as an option are Sport Stripes in the same colors. The John Cooper Works logo on the radiator grille, tailgate and door sill strips and near the side indicators highlight the car’s identity even more clearly. 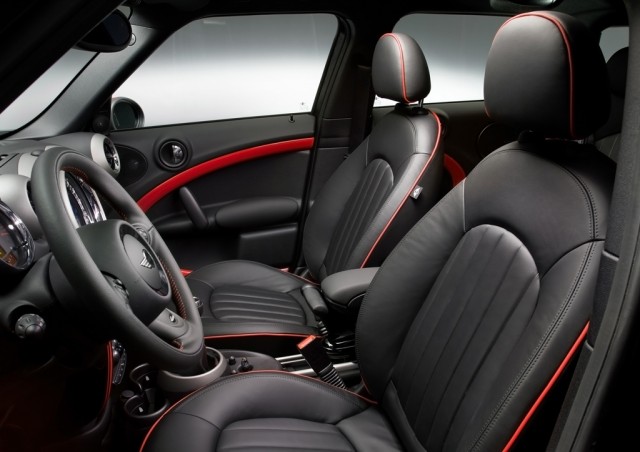 The interior of the MINI John Cooper Works Countryman also comes with additional sporting touches as standard. Sports seats in Diagonal Track Carbon Black cloth trim with red contrast stitching have been designed specifically for the new model; while options such as the similarly exclusive sports seats with Lounge Leather trim in Carbon Black Championship Red can also be ordered. The trim strips around the cockpit, door panels and center console come in Piano Black as standard. The optional Chili Red trim elements, meanwhile, are exclusive to the MINI John Cooper Works Countryman and include red flourishes for the cockpit and doors, and red stripes for the black trim elements on the center console. Added to this are the sports steering wheel with red contrast stitching and John Cooper Works logo, the dark speedometer and rev counter dials, anthracite-colored roof liner, gearshift lever with red shift pattern lettering, red contrast stitching for the gearshift lever gaiter and floor mats with red stitching add further depth to the sports car ambience.

The Countryman vs the Original Mini