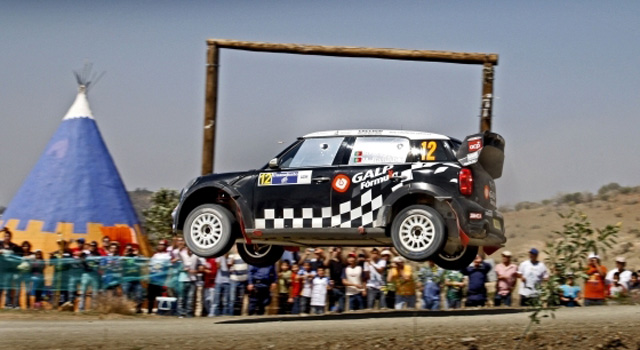 Portugal native and MINI WRC race driver Armindo Araujo brought home a top ten finish in the week’s Rally Mexico. Looking forward to his homeland rally at the end of this month, Araujo says the team finished right where they’d expected to.

[Official release via MINI Motorsport] His ideal was a top ten placing on the Rally Mexico. In the end the MINI WRC driver finished seventh overall. For Armindo Araujo of WRC Team MINI Portugal it was a case of mission accomplished.

For Armindo Araujo the Rally Mexico ended almost as it had started. After the short sprint stage which opened the first long-haul event of the 2012 WRC season to the joyous cheering of thousands of fans, Armindo lay in a provisional eighth place. Three days and over 400 competitive kilometres later he crossed the line – one place up and seventh overall. On the face of it, it seems like an uneventful drive through the highlands of Mexico for the driver from the WRC Team MINI Portugal. The reality, though, is entirely different.

“The rally was not easy,” said Armindo after the Power Stage, which brought the third WRC event of the year to a close on Sunday afternoon Mexican time. However, he was extremely pleased with his seventh place despite having earlier indicated that an even better finish was possible. “It’s just a pity we were running first on the road, because we know we can go much quicker,” he had said on Saturday. Instead Armindo was reduced to sweeping the stages for following drivers, which cost him time.

In addition the challenging stages held on rough gravel roads at altitudes of over 2000 metres did not make life easy for contestants. Cars and crews were often pushed to the limit. Armindo in particular faced trying conditions, but still managed to hold his own against the best ten drivers on the event.

Looking forward to his home event.
Seventh place, as the final result turned out to be for Armindo in Mexico, meant just one thing to him: mission accomplished, for he had targeted a top ten finish, having placed tenth on his debut here in 2010. His latest result means he scored six points in the drivers’ championship to add to the points earned through consistent performances which enabled him to finish tenth on the Monte Carlo Rally, and fifteenth in Sweden. In addition, the Rally Mexico provided a good test ahead of the next WRC round, to be held on gravel roads in Portugal at the end of March. That means: home rally for Armindo.

“Last year in Portugal marked my first event in a MINI, und naturally it’s great to see the fans there. Portugal could very well be the biggest event of the year for us,” says Armindo. Teammate Paulo Nobre will also be present in Portugal. The rally further marks the next planned appearance of Dani Sordo in the MINI John Cooper Works WRC entered by Prodrive, with Patrick Sandell of the Swedish World Rally Team making his second appearance of the season.

Thus MINI fans can look forward to no less than four MINI WRC cars contesting the Rally Portugal. The fourth round of the WRC season starts on 29 March.

MINI WRC Team Gunning for the Podium in Spain