Tomorrow, March 22,2012, officially marks 10 years of MINI in the US of A. What many dismissed as a niche car for a non-existant audience has more than flourished on American soil. But MINI did more than just bring back a classic. It did more than sell a fun, fast, cute little car. MINI defined an entirely new market segment in the US: The Premium Small Car. At the time, you could buy small, you could buy nice, you could buy fun, but you couldn’t buy all three. Not in one car, anyway. Now it seems like every auto show circuit, another manufacturer has a new, nice, small car with its sights set on being the next MINI. Try though they might, none of them have yet been able to match MINI’s mix of performance, personalization, fuel economy and style. Critics might be able to argue for better cars in one or two areas, but no one has yet to match MINI in that sweet spot at the intersection of performance, economy, and affordable luxury.

It’s worth remembering that the MINI didn’t debut in the height of a fuel crunch or a wave of change in the automotive landscape. It arrived in boring old 2002. Jim Mcdowell, Vice President of MINI USA summarizes that climate this way:

“MINI launched in the U.S. during the time when gas was cheap and large trucks and SUVs ruled the road. Many thought the brand would be a one-hit wonder, and we are extremely proud that we were able to surprise some the toughest critics, and at times, even ourselves.” 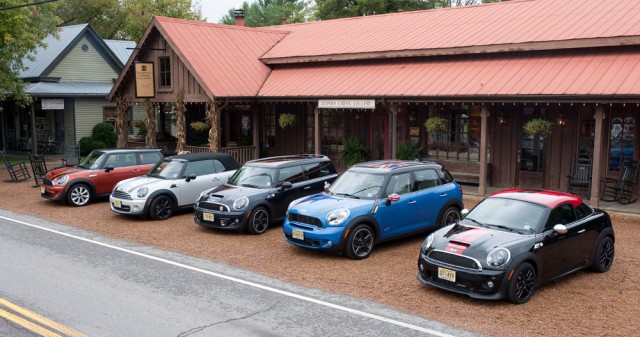 In the ten years since MINI debuted here in America, we’ve seen massive shifts in the automotive landscape. The PT Cruiser fell by the way side. VW’s New Beetle all but disappeared into the background — never finding the big sales success VW had hoped for in the US. Chevy’s HHR came and went. General Motors was saved from extinction by the federal government and shed nearly half its model offerings. Chrysler got bought by Fiat! Toyota nearly destroyed its own quality reputation. My personal favorite: Hummer was put out of business. Meanwhile, the plucky little MINI had it’s biggest sales year ever not in 2002 when it was the hot new thing, but in 2011. MINI is on track to have an even better 2012. In fact, right now one in every five BMW Group vehicles sold in the US has the MINI wings on its bonnet.

While the rest of the industry contracted and trimmed their model lineups, MINI grew from one model to six, and they’ll soon be at ten distinct versions of the MINI. GM was forced to shutter hundreds of dealerships across the country. MINI dealers grew from the initial 66 dealers, to 112 as of tomorrow when MINI of Marin has its grand opening. I can remember when taking my R53 to the dealer meant nearly a four hour drive. Now the dealer network has nearly doubled and I even have five dealers to choose from here in the greater Chicago area alone.

There are numerous reasons for MINI’s success. Chief among them, I believe, is that from the beginning MINI has offered something utterly unique in the automotive world. While other car companies have attempted to get their own slice of the MINI magic, none have quite figured out the secret sauce. Fundamentally, I think MINI is more willing than its competition to build a car that the majority of buyers won’t want. Put another way, I think they purposefully limit the appeal of the car. They’re willing to build a car that doesn’t make sense on paper. MINI will chose size over perceived practicality. They’ll chose light weight and handling over the brute force of horsepower. They’ll chose character and personalization over broad appeal. They’ve chosen elegant design details over rock-bottom pricing. They’ve decided that a small car can get great fuel economy and be nice, but most importantly, be FUN. MINI chose to build a car that appeals to a particular cross-section of drivers, and now they’re growing that segment from the inside out with new models like the Countryman, the Coupe, and the Roadster. They’ll never build cars meant to be all things to all people, but MINI remains committed to designing and building cars that are truly something. If that’s what you’re into, then MINI’s thrilled to have you as a customer. If not, there’s a whole world of other choices out there for you.

However, if there’s one thing that truly makes MINI unique, it’s the fans. It’s you — the person reading this. It’s Gabe’s enthusiasm that started MotoringFile more than 5,400 posts ago. It’s the passion that pushed DB and Todd to start WhiteRoofRadio, which is now up to 417 episodes and more than 3 million downloads. It’s events like MINI’s on the Dragon, AMVIV and a dozen others all started by fans. Even MINI gets involved with big events like MINI Takes the States and MINI United. Where other car companies thrive simply on sheer numbers of faceless customers, MINI thrives because of its fans. It’s this enthusiast community, chock full of diversity. Different backgrounds. Different opinions. Different styles — each as unique as their MINI. While not every MINI owner is an enthusiast, I’d wager that no community of enthusiasts makes a bigger difference to the car brand they love than this community does to MINI. We’re not just owners, not just fans, we’re ambassadors. Best of all, nobody knows that better than the MINI USA crew in New Jersey.

So happy birthday, MINI USA. Blow out your candles. Have some cake for us. We’ll see you at MTTS.

MINI Shows off the Coupe’s Junk in the Trunk