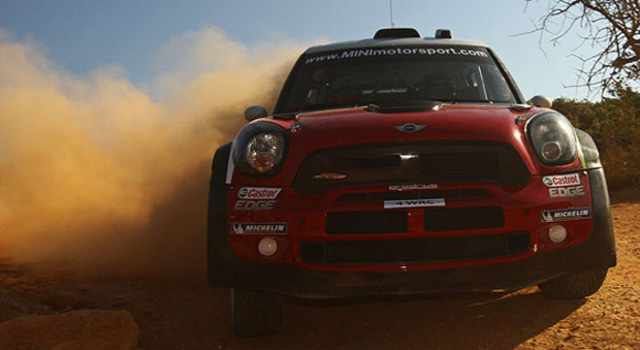 Final showdown, final shootout, final chance.
On the Rally Portugal’s so-called Power Stage, Dani Sordo and the MINI John Cooper Works WRC landed the coup of the day. Positions three, four, two and four again – Sunday’s early special stages delivered good results for Sordo. Until rain arrived. A massive downpour and tyre damage on the penultimate stage ended the run of the Spaniard driving for Prodrive. Still he maintained his confidence. The Power Stage was scheduled as Sunday’s final stage, the last stage of the entire rally. Thus three world championship points were on offer to a driver with courage and unwavering foot.

However, the conditions for the 22nd and final stage failed to improve in the slightest – continuous rain during the final five kilometres and 80 metres, turning the going into a slidefest. Real Sordo weather. He relegated Jari-Matti Latvala (Ford) to second place by three-tenths of a second. Fastest time and three points on the board – the maximum he, MINI and Prodrive could hope for from 12th on Sunday. “The weather was treacherous and the conditions very tough, but I managed to get the maximum,” he said. “I was very happy with the handling of the MINI. I had some good moments on this rally, and therefore I was able to start the stage in a confident mood.”

Araujo misses own target.
Despite setbacks during the event’s opening days Sordo crossed the line in 12th place overall, thus ending as highest-placed MINI driver. Armindo Araujo finished his home event in 16th place – some way off his targeted top ten placing. “To be honest, I imagined something slightly different, and, above all, a slightly more successful Rally Portugal,” admitted Araujo afterwards. “This weekend the MINI was very good,” he added after suffering a puncture on the second-last stage, “and it’s a consolation to be the best Portuguese driver after my bad luck.”

However, bad news followed good: Although Sordo and Araujo escaped lightly from their tyre damages, the same could not be said for Patrik Sandell. The Swede rolled into retirement.

However, despite ups and downs on the Rally Portugal, MINI drew positives. Thanks to six of 22 possible stage wins; thanks to Coup of the Day by Sordo.