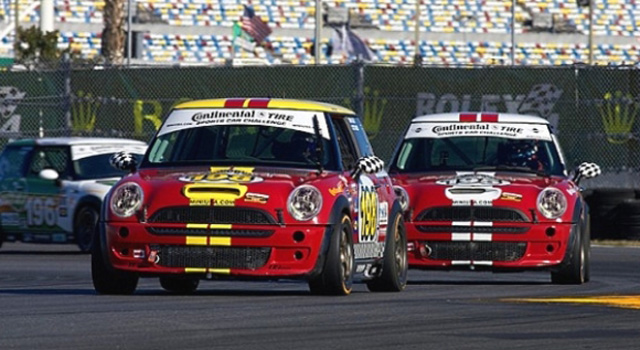 [Official Release from MINI Motorsport] The 2012 motorsport season is already well under way and MINI is very much part of the action, both on the circuits and in numerous rallies.

There is already a great deal happening on the MINI Stars world map, proving that the motorsport season is now beginning to hot up – on the circuits and in rallies alike.

In the USA, RSR Motorsports has already got off to a good start in the new season of the GRAND-AM Continental Tire Sports Car Challenge. The RSR Motorsports drivers are generally faced with a David and Goliath scenario in this national racetrack series when they line up in their streamlined MINI Cooper S cars alongside the more beefy brands such as Porsche, Aston Martin and Chevrolet.

Team manager Randy Smalley put a seasoned pair of drivers, Ron Farmer and Jason Hart, into the opening race of the season in Daytona, then upped the number of MINI cars to three for the second race in Birmingham, Alabama. And the team’s two newcomers, Corey Fergus and Kyle Gimple, surprised everyone straight away by achieving the best result in the race for RSR Motorsports, finishing in 39th place in a field of 78 first-class starters.

Meanwhile, the entrants in the MINI Challenge in Brazil need not worry about facing any Goliaths in the 2012 season, as this club racing series, which is in Brazil for the third time this year, is only open to identical MINI John Cooper Works Challenge cars. There is nevertheless plenty of excitement during the event because the field of starters is evenly matched and the races are often only clinched in their dying moments.

The first race of the season was held in São Paulo. With the reigning champion Patrick Gonçalves absent, Raphael Abbate was able to keep the upper hand in his MINI Challenge with start number 26 and has provisionally occupied the top spot in the overall classification.

Moving from circuits to rallies and from America to Europe, we now go to Belgium, where Patrick Snijers is chasing a title in the national rally championship there in his MINI John Cooper Works WRC. In the second event of the season, Patrick pushed his MINI WRC to achieve second place, and put the icing on the cake by recording the best time in the final stage. After some teething problems with the set-up of their MINI WRC on wet roads, Patrick and his co-pilot Johan Gitsels steadily improved throughout the event, just failing to clinch first place, which went to Pieter Tsjoen in a Citroen.

In Ireland, meanwhile, Derek McGarrity and his co-pilot James McKee came third in the national rally championship, which counts towards the Intercontinental Rally Challenge (IRC). There was little scope for Derek, who secured a victory in the 2012 Bishopscourt Stages Rally in mid-March, to do any better than third this time, primarily because of an issue with the brakes which cost the Irish duo some time at the beginning of the event, but which was nevertheless rectified quickly.

And lastly, a new star was added to the MINI Stars world map over Easter when Halem Ates and his co-pilot Volkan Bacak made their debut in a MINI John Cooper Works S2000 in the 22nd Eger Rally in Turkey. The Turkish duo driving for the private “Team 47” ultimately finished in eleventh place. You will find more information on the MINI Stars here.