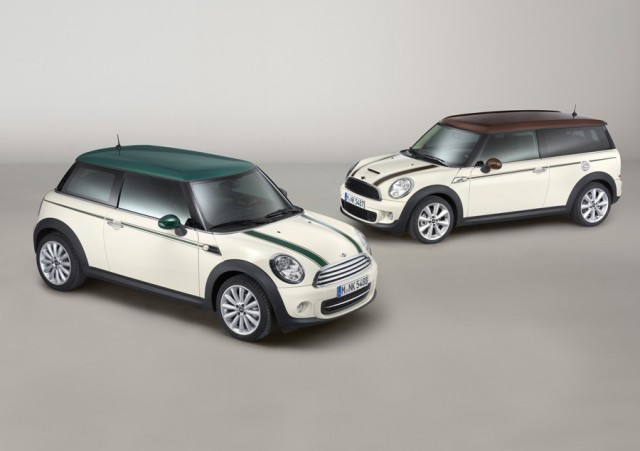 MINI’s latest special editions are all about classic British style – just in time for the London Olympics. Look for them to be available worldwide later this summer.

[Official Release] As MINI defines the streetscape, so the Royal Parks in the heart of London define the structure and rhythm of life of an entire city. For centuries they have constituted vital oases amid the hustle and bustle of the English capital. Now the championing of British tradition and lifestyle can be expressed in particularly stylish fashion courtesy of the design models MINI Hyde Park and MINI Green Park, whose exclusive colour combinations and trim levels lend them an appeal that is at once classic and sporty. Yet again MINI strikes attractive individual notes with these eye-catching characters on wheels who are ready to unleash their impact amid the urban traffic of other big cities as well.

Unobtrusive extravagance is the defining element when it comes to the appearance of the MINI Hyde Park. Its discreet Pepper White body colour is combined with Hot Chocolate contrasting paintwork – available for the first time – on the roof and exterior mirror caps. A further facet of the MINI Clubman colour scheme are the lower sections of the C-pillar in body colour. To match the contrasting paintwork, the MINI Hyde Park also sports bonnet and side stripes in Hot Chocolate, while another highlight is provided by indicator lenses in transparent white. Along with the direction indicators integrated in the headlights, this lends the side indicators and rear lights a markedly individual look as well.

Inside the MINI Hyde Park, surfaces in Pepper White underline the classic, balanced overall impression. The seat upholstery and optional Colour Line draw on the entire range available to the MINI and MINI Clubman. Ensuring a particularly eloquent interior design match are seats in cloth/leather or Leather Gravity with the Carbon Black or Polar Beige Colour Line and the MINI Yours dashboard lined in leather in a Black/Polar Beige combination.

With the MINI Hyde Park, the British premium small car manufacturer continues the tradition of design and special-edition models named after parts of London. Hyde Park spans 140 hectares and is famous for its Speakers’ Corner on the northeastern edge. The park is a haven for countless leisure activities in the centre of London and a green oasis that invites you to stroll between the shopping hot spots of Kensington and Oxford Street. It is also the starting point for the London-Brighton Run, the annual veteran car rally. In 2012, as part of the Olympic Games hosted by the capital of MINI’s home country, the Triathlon and Marathon Swimming events will be held in Hyde Park.

The traditional British passion for sporting competition is expressed in the exclusive design of the MINI Green Park. The roof and exterior mirror caps display British Racing Green paintwork, forming a pleasing contrast with bodywork in Pepper White. Bonnet stripes in British Racing Green and transparent white lenses for the direction indicators heighten the distinctly classic-sporty look. On this design model, too, the lower C-pillars of the MINI Clubman are in body colour.

The MINI Green Park likewise has interior surfaces in Pepper White, reflecting a cabin design that takes its cue from the exterior. And providing the perfect complement again are seats in Black or Polar Beige and the MINI Yours leather-lined dashboard in a combination of Black/Polar Beige. Also available as an alternative to the MINI design favourites are all other variants along with the entire range of optional extras for the MINI and MINI Clubman.

The MINI Green Park takes its name from a recreational area very near Buckingham Palace. Covering an expanse of 19 hectares, this park forms a key element of the city’s green belt, linking Hyde Park to St James’ Park. All told, it makes for a walk of some four kilometres through the Royal Parks, from Kensington Palace in the west to Downing Street in the east.