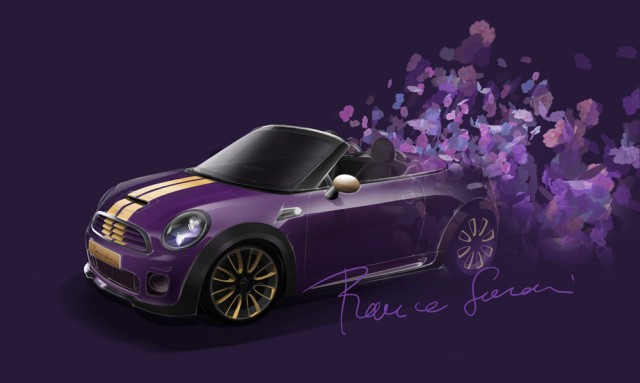 MINI supports the Life Ball in Vienna for the 12th time. Proceeds so far from the one-off Life Ball MINI models amount to more than a half a million euros.

Since its market launch in 2001, MINI has been a partner of the Life Ball. During this period, eleven unique vehicles have been specially designed for the event by a wide range of internationally renowned celebrities. For the 20th anniversary of the Life Ball, MINI continues its tradition of donating a vehicle that has been creatively adapted by an international celebrity, the proceeds of which go to projects combating HIV and AIDS. The auctioning of these one-off MINI models over the last years has generated proceeds of more than 500,000 euros for the charitable cause.

In previous years these Life Ball MINI models have been created by international fashion designers, including Joseph Corré for Agent Provocateur, Donatella Versace, Renzo Rosso for Diesel and Missoni, as well as decision-makers from the fashion scene such as Mario Testino and The Blonds for Katy Perry. This year the ranks of Life Ball MINI designers are joined by Franca Sozzani, chief editor of Italian VOGUE and UN Goodwill Ambassador for Fashion 4 Development. “I thought at MINI as a beautiful woman who put a scarf on her head when she drives a Roadster.” – This is how Sozzani describes the inspiration behind her design sketch for the MINI Roadster.

The combination of floral motifs and mannequins with trendy Deepest Purple matt paintwork lends the MINI Roadster a thoroughly unmistakable look. The highlight of this year’s Life Ball MINI is the floral design on the roof of the MINI Roadster. Steel-coloured accents on the exterior mirrors and alloy wheels, along with typical MINI rally stripes, elegantly round off this unusual colour concept. The interior, meanwhile, boasts high-grade materials and a sophisticated seat design.

“In Franca Sozzani we have found an experienced fashion expert who devotes her artistic prowess primarily to colour. We are now thrilled to be able to bring this joint project to fruition”, says Anders Warming, Head of MINI Design.

The one-off MINI will be auctioned in the Hall of Ceremonies at Vienna’s Hofburg palace as part of the AIDS Solidarity Gala on Saturday 19starting at 5pm.

A further highlight of the Life Ball 2012 will be the fashion show presented by MINI and staged by VOGUE Italy. To mark the event’s 20th anniversary, creations by former Life Ball designers will be on display alongside legendary looks.

The Classic Mini says “Happy Birthday” to the Porsche 911