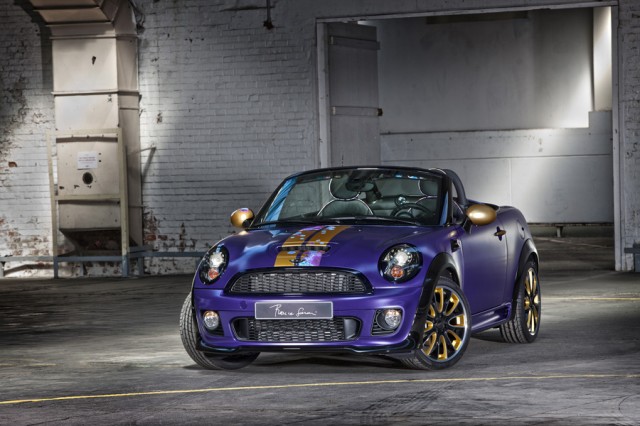 [Official Release] Editor of Italian VOGUE presents her one-off MINI at the 20th Life Ball in Vienna in support of AIDS LIFE.

A special car to befit a special occasion: Franca Sozzani, chief editor of Italian VOGUE, has designed and presented her very own MINI model exclusively to mark the 20th anniversary of the charity event. The model in question is a MINI Roadster, the first open-top two-seater in the brand’s history. The one-off creation, which went under the auctioneer’s hammer at the AIDS Solidarity Gala and raised a donation total of 54,000 euros for HIV projects, left the audience of around 43,000 in no doubt: this is set to be a sporty, feminine summer. Franca Sozzani decorated the roof of the 184 hp MINI Roadster – which has a top speed of 227 km/h (141 mph) – in a stylishly intricate floral design which, in combination with very “of the moment” Deepest Purple matt paintwork and gold hallmark MINI rally stripes, produced an impressively complete work of art.

Inside the car, lavishly printed leather for the instruments and brass-coloured touches on the circular elements add the icing on the cake. The most influential woman in the Italian fashion scene, herself an avid MINI driver, gave her creativity free reign in the design of the special one-off model. “The concept behind the MINI customisation is inspired by the beautiful and elegant women who in the past used to wear a scarf draped around their head when driving a convertible,” says Sozzani, citing her inspiration. And, as the UN Goodwill Ambassador for Fashion 4 Development adds: “Flowers are a symbol of joy and life. And the Life Ball is always fighting for life and joy.”

MINI supports the Life Ball in Vienna for the 12th time.

Since its market launch in 2001, MINI has been a regular partner of the Life Ball. In previous years numerous celebrities have left their stylistic imprint on an exclusive MINI model, among them the design team DSQUARED2, star photographer Mario Testino and designer Angela Missoni. “And thanks to the visual signature of Franca Sozzani, the this year’s MINI designed specially for the occasion has similarly become a lifestyle and design highlight in the name of this good cause,” says a delighted Gery Keszler, founder and organiser of the Life Ball. As such this one-off model fits in perfectly with a further highlight of the event – the Fashion Show presented by MINI, staged this time round by VOGUE Italy. The show for this anniversary year stoked up particularly keen anticipation after Keszler announced a 20-year retrospective of fashion history. Cue for top models of our time – including Eva Padberg, Tatjana Patitz and Karolina Kurkova – to revive some legendary looks from the past. The many fashion and lifestyle personalities attending were thus able to witness the comeback of Thierry Mugler’s almost forgotten robotic look and the famous train dress that Jean Paul Gaultier designed for Dagmar Koller. Alongside representatives of leading fashion labels such as Diesel, Missoni, Gianfranco Ferré, Heatherette, Philip Treacy, Moschino and Paco Rabanne, politicians including ex-US President Bill Clinton as well as numerous film and television stars made sure they did not miss out on the AIDS charity event of the year 2012.

MINI Sales Continue their Downward Trend in the US for November