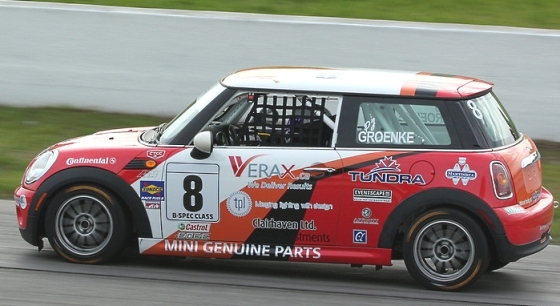 Official News: MINI fans who live for circuit racing are in for a real treat this weekend. Events will be held in five series, in which many private MINI teams will line up on the grid.

The jostling for positions, attractive races that allow the crowds to follow the action on challenging yet easily visible tracks, and – last but not least – the MINI racing cars themselves: circuit races are without a doubt among the finest events that motorsport has to offer. On the weekend of 8th to 10th June, fans can look forward to an extra-large portion of pure racing action. Many MINI teams will be battling for points in no fewer than five series in Europe and North America.

The MINI Trophy in Germany and MINI RUSHOUR in Italy are purely about MINI power, as the races in these series are exclusively for MINI racing cars. The MINI Trophy heads to one of the most challenging racetracks in Germany for the third round of its season: the Sachsenring, where it will feature on the bill of the ADAC Masters Weekend. The drivers of the MINI John Cooper Works Challenge clubsport models are not the only ones in for a treat when they climb into their cars for two 30-minute sprints. Owners of production MINIs will also have the chance to experience the iconic circuit at close hand. Saturday evening’s MINI Parade offers them the opportunity to complete a few laps of the Sachsenring for themselves.

MINI RUSHOUR action in Mugello.
Italian motorsport fans are already looking forward to the weekend. After celebrating a successful premiere at the 2012 MINI United festival in France, the MINI RUSHOUR clubsport series, which was launched at the start of the year, now heads to Italy for its second round. The names of Andréa Gagliardini and Andréa Nember went into the history books as the winners of the opening two MINI RUSHOUR races when the world’s largest MINI community festival was held in Le Castellet. As such, they will be the men to beat when the second round gets underway at the Autodromo del Mugello.

As well as the Europe, MINI Motorsport also has a second stronghold in North America this weekend. MINI will be represented in two touring car series across the Atlantic. The second round of the Canadian Touring Car Championship (CTCC) will take place in Canada, with Team Octane looking to challenge at the front of the field again following a stunning opening round. Team Principal Alain Lauzière will line up with six MINI Cooper and MINI Cooper S cars, and the boss himself is keen not to miss out on a slice of the action. Alain will be behind the wheel of the number 47 MINI Cooper S in the touring class.

Two MINIs start in Mid-Ohio.
South of the Canadian border, the RSR Motorsport team is among those preparing for the next round of the Continental Tire Sports Car Challenge in Lexington, Ohio (USA). At the Mid-Ohio Sports Car Course, the experienced duo of Sarah Cattaneo and Kyle Gimple will be flying the colours for MINI in car number 198. “I am really looking forward to lining up in a MINI again,” says Sarah. “The MINI always performs well in Mid-Ohio.” Team Principal Randy Smalley is also sending Chris Puskar and Mark Congleton into action in the second RSR Motorsport MINI (car number 195).

And from North America we return to Europe, where the MINI Challenge Switzerland is taking an excursion into neighbouring Italy. The crowds in Varano can look forward to two very attractive sprints. As you can see, MINI fans are in for a real treat this weekend. Updates from the races will be available here on the MINI Motorsport website, as well as at Facebook.com/MINImotorsport and Twitter.com/MINImotorsport.