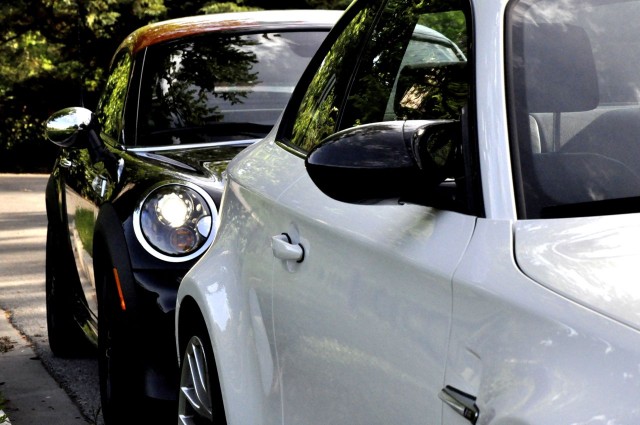 We’ve reviewed the JCW Coupe in prototype and final form both on the track and on the street. But how does the Coupe stack-up against the best at the top-end and low-end of its pricing? To answer that question we assembled two of the highest acclaimed cars in their respective segments. On the high-end (weighing in at $52k tested) is the BMW 1 Series M Coupe. And on the low-end the $26k Fiat 500 Abarth. Today we start with the BMW.

Let’s be honest. The JCW Coupe doesn’t win this comparison in performance. Nor does it win on utility – no matter how big the trunk is. Nor value (used 1M prices are anywhere from 15-20k higher than original MSRP). Yet after driving the JCW coupe back to back for the past week with a BMW 1M I’ll be damned if it doesn’t hold its own on a couple of fronts.

First let’s talk about how it unequivocally falls short; performance. The JCW Coupe is a fast car in most respects but it’s quickly humbled by the 1M in almost every category. And with about $17k separating based models it makes sense. Still the comparison is an interesting one in that the R58 JCW is the pinnacle (until the new GP) of the MINI line. The 1M on the other hand is the entry into the M range originally priced (before quicly selling out) at $47k. It’s as fast (or faster) than the M3 and offers less while giving the driver a more raw experience. So we have two ends of the spectrum that almost overlap. Which should you pine over – if any? 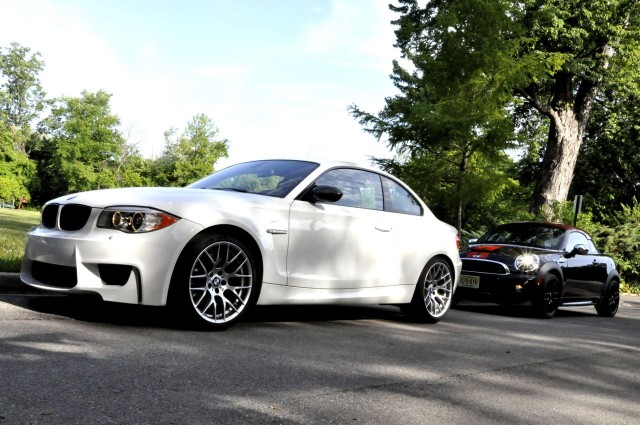 At our sister site BimmerFile we’ve already reviewed the 1M and called it an instant classic. Perhaps one of the best M cars ever created was our conclusion after our first drive.

The MINI Coupe on the other hand has had positive reviews but has left more than a few journalists asking “why?” Many have been caught up in it weighing 20 lbs more than the hatch and not having a clear reason to exist other than style. But the reality is that the Coupe has a weight distribution that allows for greater weight transfer and almost unbelievably aggressive lift-off oversteer. If the 1M is an outrageous bulldog of a rear wheel drive car, the JCW Coupe is the front wheel drive equivalent. It’s almost shocking how ragged it can feel at times. A good thing in this age of sanitized driving excitement.

In fact one could say that, for the past 6-7 years MINI has worked on making its cars feel more sophisticated and more refined. The JCW Coupe undoes it all in the best ways. 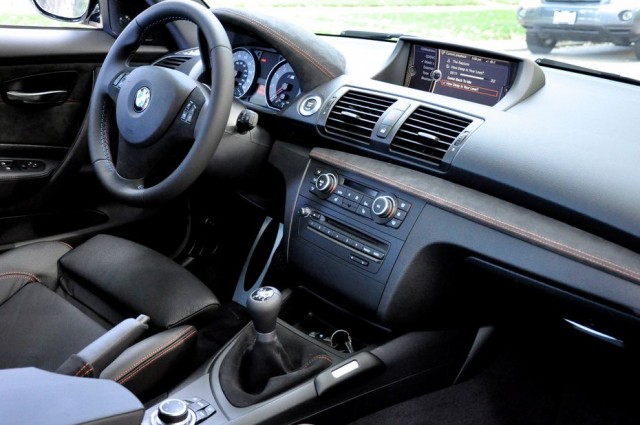 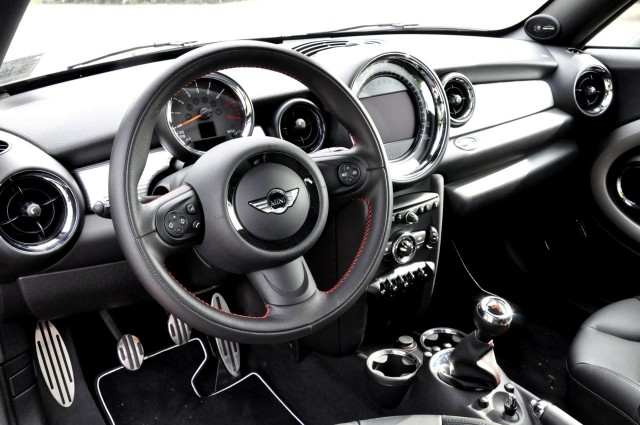 So how do they compare? When it comes to performance, the truth is not well. Of course the 1M trounces the JCW in power. But it’s the biblical amount of torque from the 1M the moment you dig into the throttle that defines the initial experience. The result of this is 1M being almost 2 seconds faster to 60 mph than the JCW (4.2 vs 6.0). However, more than that it’s the 30-50mph in 3rd/4th at 2.4/3.3 sec that devastates the JCW. And it’s not just the MINI but it devastates almost any car and even matches the Nissan GTR Black Edition for 3rd/4th gear acceleration. But where the 1M has the JCW in both acceleration and grip, the Coupe fights back in reaction and nimbleness. At 2700 lbs the JCW Coupe is over 500 lbs lighter than the 1M. That means quicker direction changes and all-around quicker reflexes.

500 lbs is something you feel in every movement. And that gives the MINI a quick and almost darty feel. This is a car that is not refined. And as much as the 1M has been billed as the hooligan BMW, it doesn’t get close to the JCW Coupe in ability to change direction at a flick of the wrist. 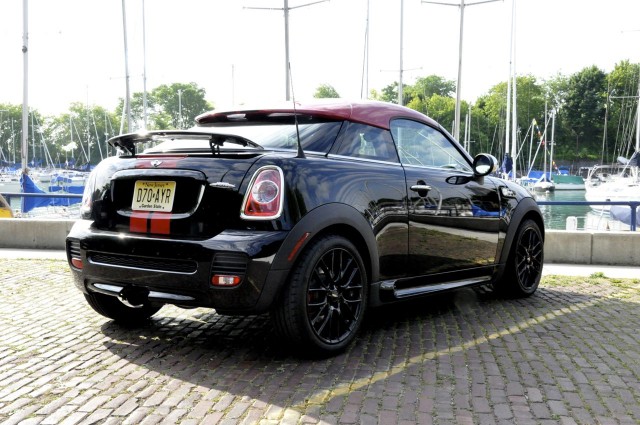 All of this means the JCW Coupe is immediately entertaining – a crown the 1M also wears proudly within the M product line-up. But as accessible as the performance (and fun) of the 1M is, the JCW Coupe is even more so. Couple this with front tires that struggle to contain the torque of the N14 and the most pronounced lift-off oversteer of any car I’ve ever driven and you have an incredibly entertaining package at the limit. Or you could call it flawed package at the limit but I think that’s missing the point of the car.

Which one wins? You don’t think a $35,000 front wheel drive MINI could overcome what is perhaps the most pure BMW M car from the past 20 years did you? If the 1M was just about the engine it would almost lose this battle. But the reality is that the chassis, brakes, suspension and stability control (MDM) is not just slightly better than the JCW but in another league entirely. Every input has more feel and better response. And every reaction it gives to a driver’s input comes with so much satisfaction that you just want more and more. 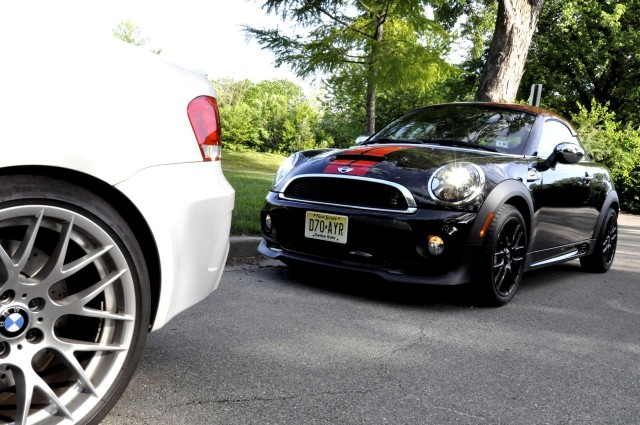 The JCW Coupe comes up second to an extraordinary car. But in reality it holds its own as a tool for driver enjoyment and fun. The combination of the low-slung style and overall eagerness of the package makes this MINI the ultimate expression of the modern MINI Go-kart mentality. Yes the Coupe fulfills the promise of being the most driver oriented MINI sold.

The JCW Coupe (like the M Coupe) is meant to be the hooligan of its respective line. It’s a throw-back to the days of cars that weren’t sanitized for the lowest common denominator. Instead they were made by men and women who wanted to make a statement for the brand and create a car that they themselves wanted to drive. With the JCW Coupe and M Coupe, MINI and BMW have done just that. 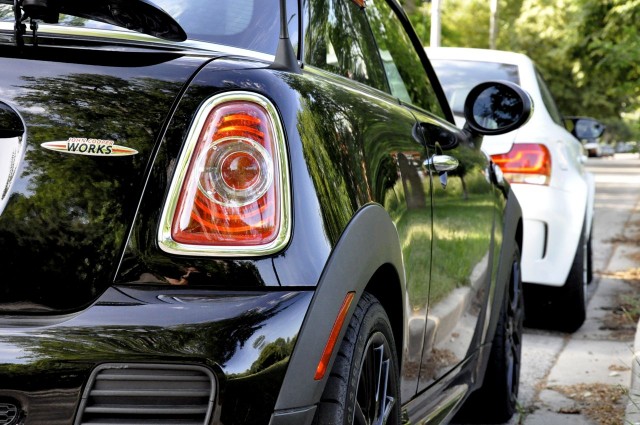