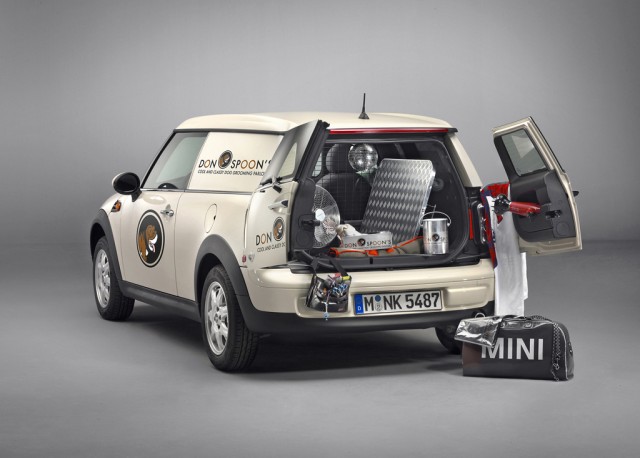 The Clubvan is here. Almost. MINI has released final production information on the first officially available commercial vehicle to wear the MINI badge since BMW bought the brand in the 90’s. The Clubvan was designed with business and load carrying needs in mind but is also engineered to retain MINI’s famous handling characteristics. In fact MINI calls it the world’s only premium model in the small car-based van segment. Look for the Clubvan to arrive in showrooms this autumn.

Official Release: With two seats, five doors and wall-to-wall MINI style and personality, the MINI Clubvan – the world’s first premium compact delivery van – has it all. With this groundbreaking model, based on the MINI Clubman platform, MINI is translating the brand’s hallmark driving fun and inherent charisma to new applications aimed at the urban user. As the first premium vehicle of its kind, the MINI Clubvan sets new standards of style, quality and driving fun in the small car-based van segment. For the first time, trend-conscious commercial users can now make a stylish and sophisticated statement when carrying out deliveries to their equally discerning customers. 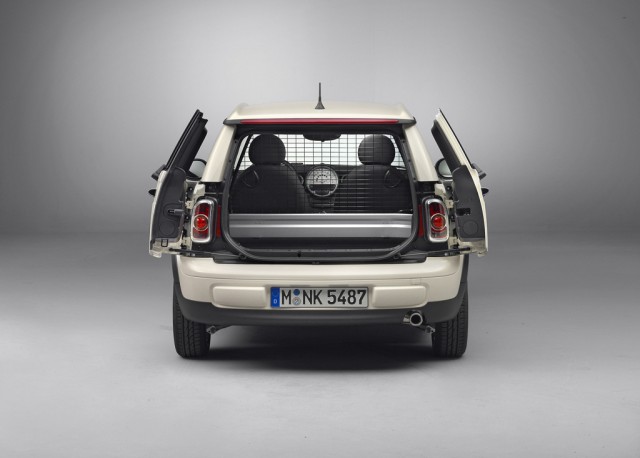 The enhanced functionality offered by the MINI Clubvan is based on a closed-off load area extending from the rear doors right up to the driver’s and front passenger’s seats. Cargo can be easily accessed either through the wide-opening split rear door or via the right-side Clubdoor. With its two-seater configuration, its fixed partition between the passenger compartment and load area, and its opaque, blocked-out rear side windows, the MINI Clubvan is classed as a commercial vehicle and therefore taxed at a lower rate. So as well as being the world’s only premium model in its segment, the Clubvan is also the first MINI commercial vehicle.

In the U.S., the MINI Clubvan will only be sold with the 121 hp MINI Cooper Engine option. This charismatic cargo carrier will hit the showrooms in autumn 2012. 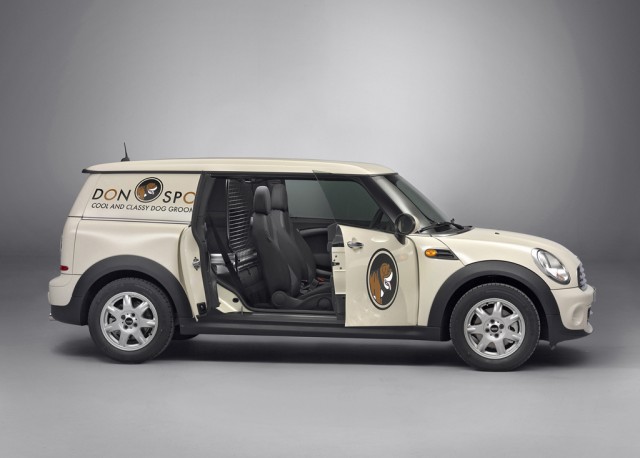 The MINI Clubvan is built at the MINI plant in Oxford. Its roots, too, are firmly in the British Isles. They can be traced back to 1960, when the original Mini – just one year after its launch – was followed up by a creative and space-efficient solution in the form of the Morris Mini Van. This van model, with a wheelbase extended by ten centimeters, a closed-off load compartment and split rear door, offered exactly the sort of extra functionality urban commercial users of the time were looking for.

Now the MINI Clubvan is poised to follow in the footsteps of its early forerunner and carry this tradition forward into the 21st century – in the same way and with the same panache as the MINI Clubman is already reprising the success of the fully glazed, four-seater Morris Mini Traveller, also from the 1960s. 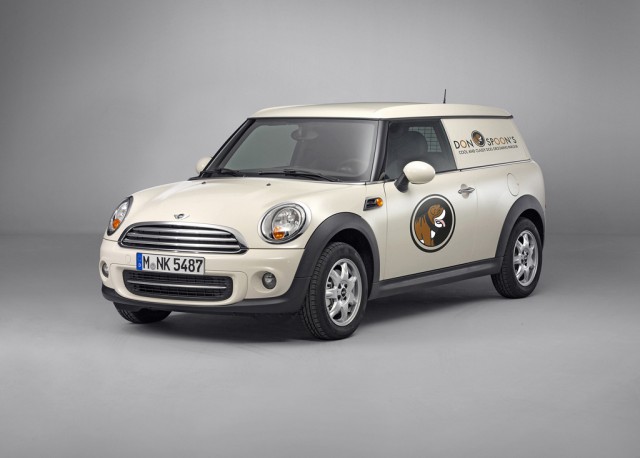 The MINI Clubvan is a versatile choice both for upmarket commercial applications and for non-mainstream leisure and lifestyle use. It is in its element whenever special cargo-carrying jobs need to be handled in style. Its dimensions, with a length of 155.9 inches, a width of 66.3 inches, a height of 56.1 inches and a wheelbase of 100.3 inches, are the same as those of the MINI Clubman. Its tailored and functionally minded design has been achieved by taking out the rear seats and adding a range of customized features. The blocked-out, opaque rear side windows are body-colored, with an interior polycarbonate reinforcement. In combination with tinted glass in the rear doors, this keeps the load compartment well concealed from prying eyes.

In the interior, the flat loading floor and the side walls are trimmed in high-quality carpeting, while an anthracite roof liner runs the full length of the vehicle. 12-volt sockets in the cargo area can be used to power electrical equipment. Six attachment loops recessed into the floor at the edge of the load area can be used to secure cargo of all shapes and sizes, preventing items from sliding around when the vehicle is on the move.

The partition behind the driver’s and front passenger’s seats, comprising a lower solid aluminum section and an upper section of stainless steel mesh, is firmly attached to the vehicle body. The partition prevents objects in the load compartment from slamming forward into the passenger compartment under heavy braking. It also allows loading right up to the roof, so that full use can be made of the rear compartment’s 30.3 cubic feet of load space. The cargo area is 44.8 inches long and, even at its narrowest point just behind the rear doors, is 40.1 inches wide. Maximum payload capacity is 816 lbs. 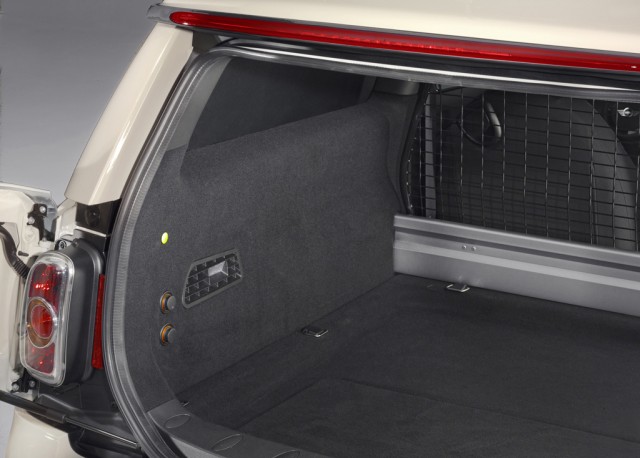 With the base Cooper engine, it’s not just from a cost point of view that the balance between driving fun and fuel consumption is so attractive. The 1.6-liter engine with fully variable valve timing produces maximum power 121 hp and provides 0 to 62 mph acceleration in 9.8 seconds, with a top speed of 124 mph.

As an alternative to the six-speed manual transmission which is standard specification for all three models, the MINI Cooper Clubvan can optionally be supplied with a six-speed automatic transmission. 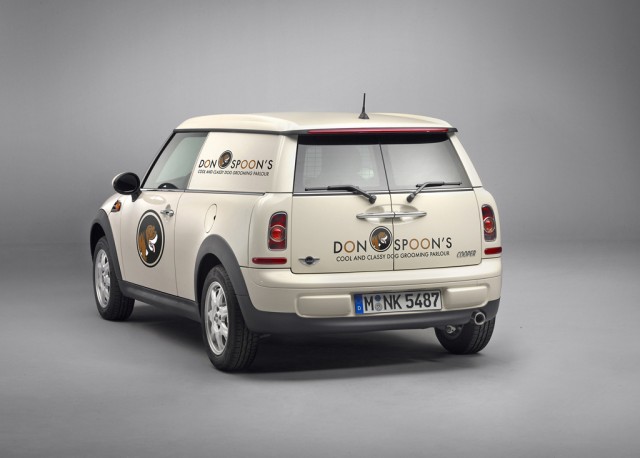 Distinctive style and personality as standard, personalization by request.

Like the other model series, the MINI Clubvan can be ordered with an extensive range of optional extras to enhance convenience, driving enjoyment, safety and practicality. These include xenon headlights, black headlight shells, Adaptive Headlights, Automatic Climate Control, Park Distance Control, automatically dimming interior and exterior mirrors. In place of the standard MINI Boost CD radio MINI Connected with a 6.5” LCD screen is also available. The optional MINI Connected with Navigation system, which keeps the MINI Clubvan heading in the right direction on its delivery runs, is a further useful option 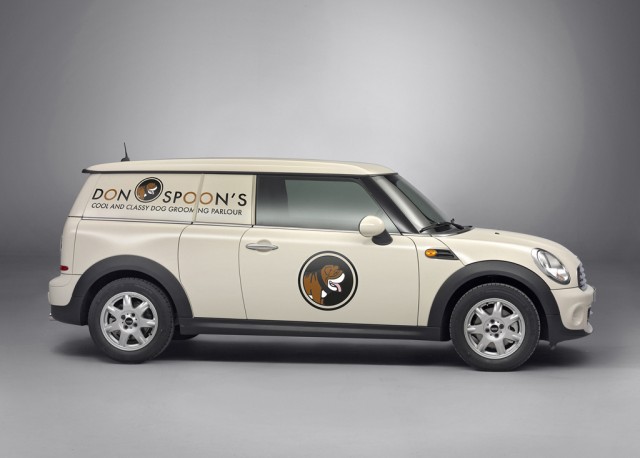 The MINI Clubvan lends business an individual and exclusive touch.

The MINI Clubvan’s innovative blend of clean and uncluttered practicality and exclusive premium characteristics makes for a distinctive presence around town. This innovative vehicle concept is tailored in particular to the needs of commercial users (such as fashion designers, event caterers, architects or photographers) whose businesses supply exclusive products and services to discerning customers; and who are also looking to express their appreciation of premium quality and individual style in their choice of vehicle. Whether as a mobile calling card for small businesses or as a stylish addition to a wider vehicle fleet, the MINI Clubvan makes a bold and innovative choice for commercial users, and one whose typical MINI driving fun and instantly identifiable charisma are guaranteed to make a winning and lasting impression.