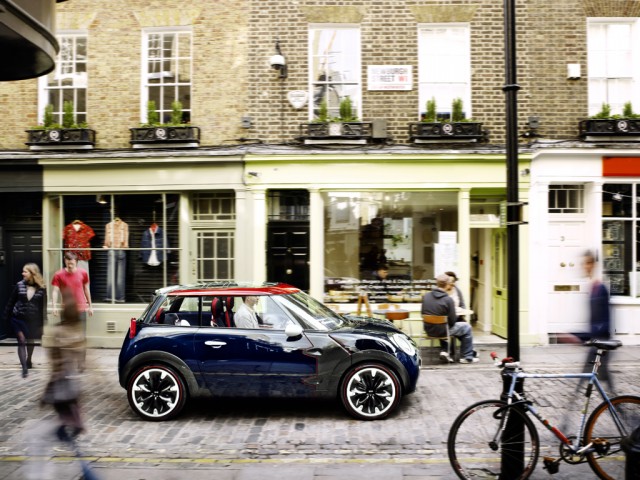 While these areas of focus could have a wide range of applications throughout BMW Group, they could also point to one particular exciting possibility for MINI fans: a production version of the MINI Rocketman concept. We’ve been hearing rumblings from sources for awhile that, in order for MINI to profitably build the Rocketman they’ll need a partner. It’s possible that this Toyota/BMW partnership could include BMW collaborating heavily with Toyota on the next generation platform for the Toyota iQ. This platform could then underpin a production version of what we now know as the MINI Rocketman — a car that would deliver a MINI in nearly its classic footprint.

Now before anybody gets too excited, or too upset, keep in mind that we’re not talking about the Aston Martin approach here. A production Rocketman would not be a re-badged Toyota iQ. Instead, the two cars would share chassis and drivetrain components (and possibly even alternative energy drive systems), but be otherwise very different cars. Bottom line, Toyota’s involvement helps make the Rocketman possible in the first place, as the upcoming FXX platform would not be able to shrink to fit the Rocketman’s diminutive dimensions. Here’s the full release:

[Official Release] Akio Toyoda, President of Toyota Motor Corporation (TMC), met today with Norbert Reithofer, Chairman of the Board of Management of BMW AG, at BMW Group headquarters in Munich to announce the planned expansion of their existing cooperation initiated in December last year. The two companies signed a Memorandum of Understanding (MoU) aimed at long-term strategic collaboration in four fields: joint development of a fuel cell system, joint development of architecture and components for a future sports vehicle, collaboration on powertrain electrification and joint research and development on lightweight technologies.

Also today, Norbert Reithofer and Akio Toyoda of TMC both signed a Joint Statement to reconfirm their companies’ shared intention to strengthen the long-term, strategic collaboration between them.

Reithofer said: “We aim to further strengthen our competitive position in sustainable future technologies. We signed an MoU to this effect today. Toyota and the BMW Group share the same strategic vision of sustainable individual future mobility. Together we have a great opportunity to continue leading our industry through this transformation.”

Toyoda added: “BMW and Toyota both want to make ever-better cars. We respect each other. And I think this is shown by our taking the next step only six months since the signing of our initial agreement. Toyota is strong in environment-friendly hybrids and fuel cells. On the other hand, I believe BMW’s strength is in developing sports cars. I am excited to think of the cars that will result from this relationship.”

Do Rumors of a Hot BMW 1 Series Point to a Refreshed JCW Hatch?