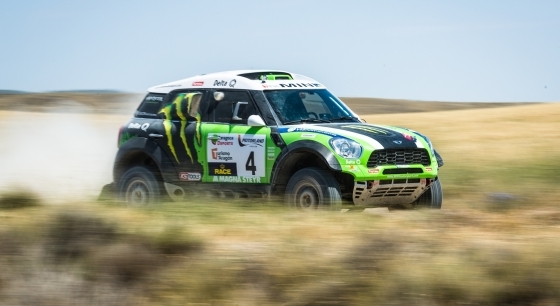 Official Release: Dakar expert Stéphane Peterhansel usually covers just over 500 kilometres of special stage in a day, not a complete rally. Although the Baja Spain is more of a sprint than a marathon, however, Stéphane was still delighted by his overall win at the fourth round of the FIA World Cup for Cross Country Rallies. After all, it was his first start in a MINI ALL4 Racing since his victory at the Rally Dakar in January of this year – a successful comeback to kick off preparations for the 2013 Dakar, which will take place in Peru, Argentina and Chile from 5th to 20th January next year.

Stéphane had said before the Baja Spain that he could “hardly wait to contest another rally in the MINI ALL4 Racing.” Right from the outset in Spain it was clear that he was in the mood to win. Stéphane raced away from the rest of the field in two of the four stages, setting the foundations for his overall victory with the fastest time over the first timed section. Stéphane’s performance was so impressive that even his team manager seemed lost for words. “There is not a lot you can say about Stéphane,” said the X-raid team’s Sven Quandt. “He drove another very good rally.”

Second place went to Stéphane’s team-mate Khalifa Al Mutaiwei, who was also at the wheel of a MINI ALL4 Racing. Khalifa won the special stage on the final day of the Baja Spain to move into second place overall and complete a one-two for the X-raid team in Spain. At the same time Khalifa cut overall lead of Jean-Louis Schlesser, who finished seventh in Spain, down to just one point while building a comfortable cushion over Qatar’s Nasser Al-Attiyah in third place overall. “A very, very good result for us. We focused on consistency and doing so proved to be a perfect approach,” said Quandt, who can now concentrate fully on the other half of his team, which is in action in South America.

Nani Roma is just one of those lining up in a MINI ALL4 Racing at the Desafío Litoral am Start, which forms part of the Dakar Series and is held in the border region between Argentina and Brazil from 23rd to 28th July when the rally covers a distance of roughly 1.600 kilometres between Iguazu to Resistencia. All of this in just six days of competition when Nani and company will encounter a spectacular landscape with several rivers, tropical forests, huge waterfalls and red earth on their way towards the finish line in Argentina.