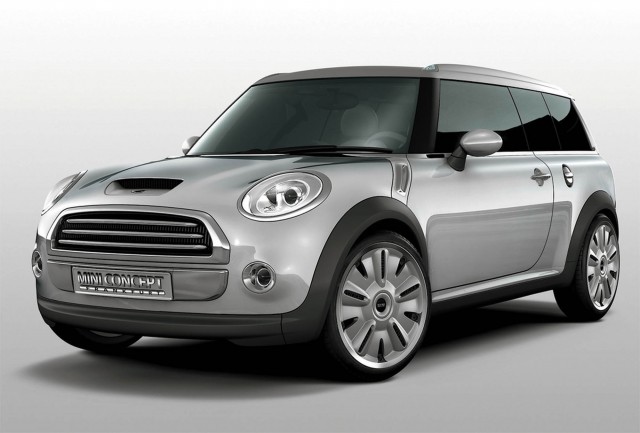 MINI uses concept cars differently than many other car companies. Mainly, MINI will often use their concept vehicles to give the public a preview of actual cars to come, not just pie-in-the-sky imagination with absolutely no chance of ever seeing pavement. Sure, some details may be outlandish, but the underlying spirit and foundation of a MINI concept vehicle can be seen in the road going versions that do come to market. Recent concepts for the Paceman, Roadster and Coupé have turned out to be more or less 1:1 to their production versions.

Ever pragmatic, MINI tends to present concepts they actually want to see get produced. You don’t see any jet-engine powered nonsense or would-be supercars from MINI. Even their most outlandish concepts are usually rooted in something they’d actually like to make. In the end, a business case may not make sense for something like the Rocketman, the Scooter E or the Beachcomber, but it wasn’t for lack of trying on the part of the MINI design team. They want some version of these vehicles to see the light of day and usually, so do we. Click past the break for a full retrospective of MINI concepts reaching all the way back to 1997.

[Official Release] Concept cars serve as a “creative playground” for car designers. All have a focus on the future in common and visionary potential comes as standard. From innovative lighting concepts and novel door mechanisms to the creative realisation of specific thematic areas, concept cars offer an open-door policy to ideas of every kind. Some concept cars are conceived to aid the development and implementation of new technologies, others showcase an innovative design language or visualise how a future series-produced model might shape up. 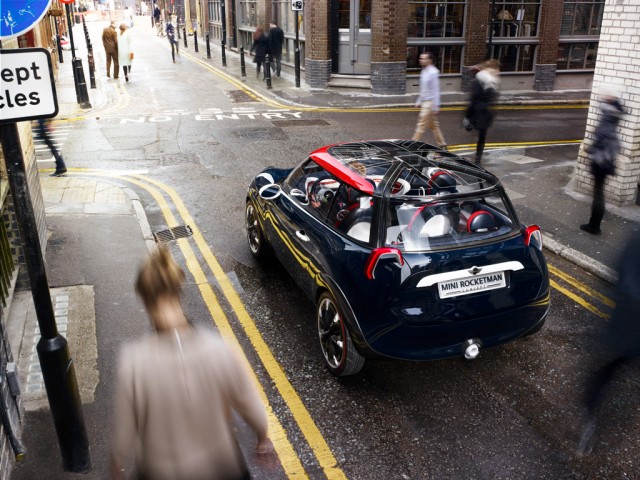 This new edition of the MINI Rocketman Concept was conceived in 2012 and combines innovative ideas for personal mobility in major cities with classical, unmistakably British design features for the interior and exterior. Decked out in the colours of the British national flag, the concept car features eye-catching details such as a distinctive lighting design for the Union Jack in the roof area. The MINI Rocketman Concept embodies sporting elegance in typical British form. 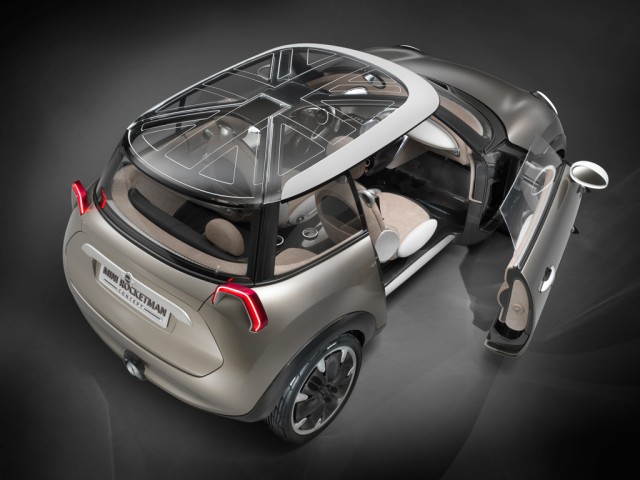 This well received concept car fused traditional values with innovative technology to redefine MINI’s core principle of the creative use of space. As a 3+1-seater with 3 doors, an exterior length of just over 3 metres (approx. 10 ft.) and a unique space utilisation concept up its sleeve, this concept car shone a spotlight into the future. Its visionary character was defined by the systematic application of lightweight design principles on a carbon spaceframe canvas. 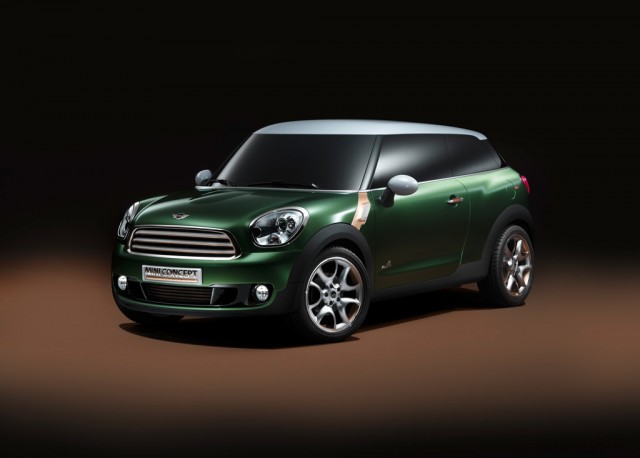 MINI positioned this concept car – a classical crossover concept based on the MINI Countryman – as the first Sports Activity Coupé (SAC) in the premium segment. The study’s dynamic and powerful, yet at the same time luxurious, appearance sent out a message of exclusive sportiness. Visually it had an air of the muscle car about it, showing off its dynamic credentials impressively from every angle. 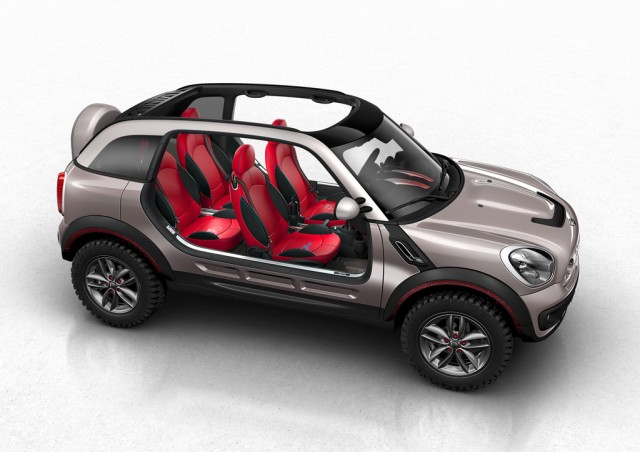 This precursor to the MINI Countryman focused on maximising driving fun and boasted a radical, open-air body concept. A very masculine concept, it referenced the legendary Mini Moke from the 1960s and focused on highlighting various interior design features. At the heart of the action was the versatile Centre Rail, to which a MP3 player, mobile phone, additional light sources, a cool box, a laptop or GPS tracker, a stopwatch, a glasses case, a bottle holder or a food box could be attached. 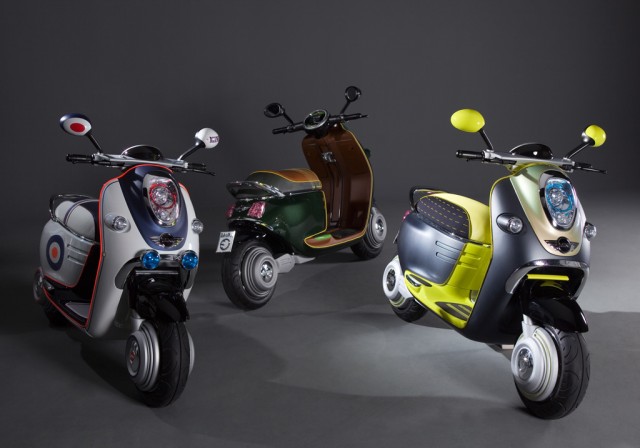 This electrically driven study took cues from the MINI E, a Germany-wide test project for emission-free driving. The MINI Scooter E Concept saw MINI Design transferring the brand’s central design language from four wheels to two for the first time, demonstrating in the process the potential of MINI. Hallmark MINI details were reflected in three different design variants: one focused on “Britishness”, another on the Mod movement which is such an important part of scooter culture, and the third model adopted the appearance of the MINI E. 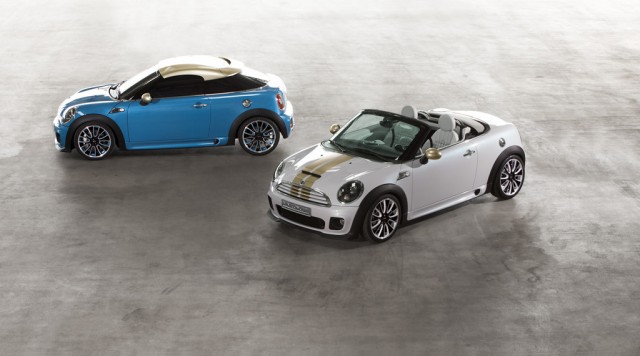 In their own distinctive ways, the “Oxford Twins” showcased a wealth of exciting features offering a fresh interpretation of the traditional values, individual style and innovative character of MINI. The Coupé delivered undiluted driving fun wrapped up in an ultra-sporty coupé skin, while the unadulterated, elegant Roadster positively exuded stylish open-top motoring. 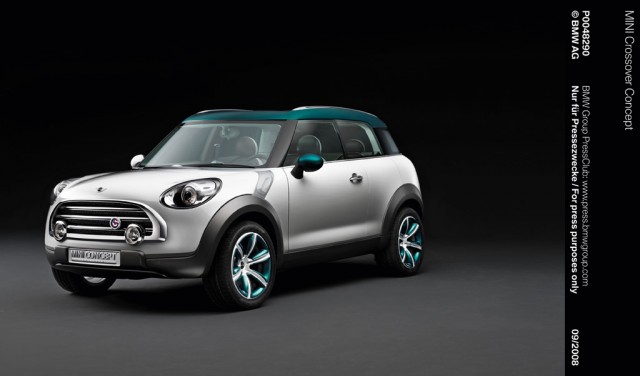 A model variant without any historical reference points and measuring over four metres (13 ft.) in length, this taster concept for the MINI Countryman offered plentiful space for rear passengers and unprecedented load capacity for a MINI. The flexible interior layout and an innovative stowage system similar to the Centre Rail allowed the interior to be adapted widely to individual requirements. 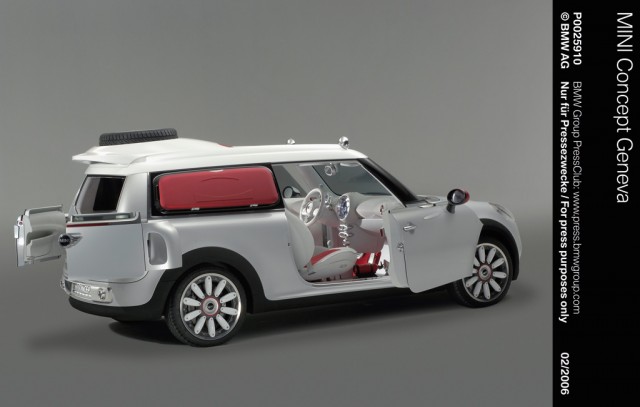 This series of four concept cars was shown at the world’s most important motor shows over a two-year period, each variant tailored to the venue for its presentation. The four variations on the theme acted as previews for the upcoming MINI Clubman and each borrowed cues from MINI history. The Concept unveiled in Frankfurt was billed “Travel in style” and played the elegance card to resounding effect, while in Tokyo the car’s British origins were brought to the fore. A winter sport theme highlighted the versatility of the “Sports Equipment Carrier” shown in Detroit, and in Geneva the MINI Concept reprised the role of the service car in the Monte Carlo Rally, thus recalling the brand’s legendary sporting exploits.

All four versions impressed most prominently with an innovative door concept that revolutionised the utilisation potential of the interior. The split rear doors offered extremely generous access to the luggage area of the MINI Concept – and would soon do likewise in series-produced MINI models, starting with the Clubman. 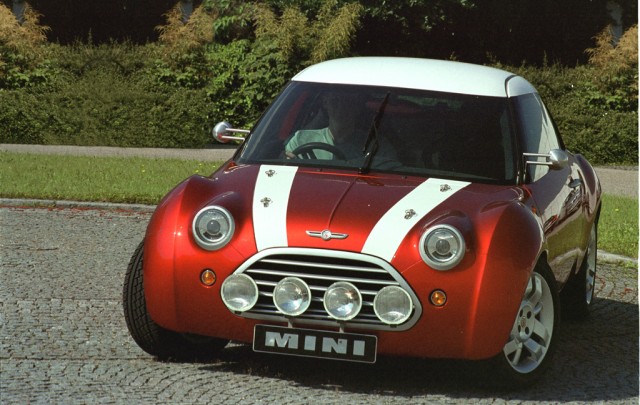 This right-hand-drive two-seater recalled the victory of the classic Mini in the 1967 Monte Carlo Rally. Design icons such as the hexagonal radiator grille and circular headlights were given a fresh interpretation for this concept car for the 21st century, MINI design having remained pretty much unchanged since 1959. This concept car was followed in 2001 by the arrival of the first MINI of the modern generation.

Worldwide MINI Sales Up 14% for November

Worldwide MINI Sales Up 19.4% For June