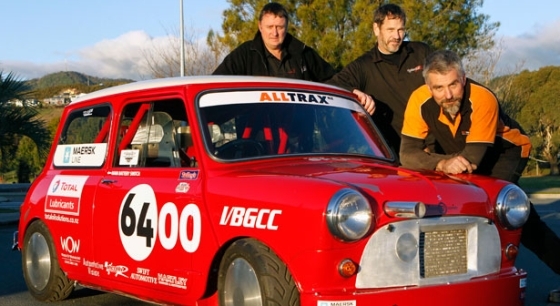 Three New Zealanders have converted a 1964 Mini Cooper S into a racing missile and are now out to set a new speed record in the USA. Their goal: 250 km/h.

Garry Orton, Guy Griffith and Garry Grand have named their unbelievable sounding mission “Project 64”, as they look to demonstrate to the world just how much power their modified Mini Cooper S possesses. The trio hopes to push the boundaries of speed with the classic Mini at the “Bonneville Speedweek”, which takes place from 8th to 20th August in the US state of Utah. They have set their sights on a speed of 150 miles per hour – that is just over 240 km/h. However, they believe the Mini might be capable of even more.

It goes without saying that numerous modifications had to be made in order to take the Mini to a fifth of the speed of sound. “We had a guy in England tell us we’d need 250-horsepower to make a body shape like the Mini’s go at the speed we wanted,” said a grinning Garry Orton. “We have more horsepower than that.” In order to achieve this performance, the engine was modified, the aerodynamics of the chassis were optimised, special tyres were fitted, the undercarriage was tinkered with, and so on and so on. Despite all the technical modifications, the 1964 Mini has retained its classic appearance – a feat the team is very proud of.

The “Project 64” bullet has now arrived in the USA. Starting out in New Zealand, the car travelled by ship to Los Angeles, from where it was taken by trailer towards Utah, where it will line up for the record attempt at the “Bonneville Speedway”, halfway between Salt Lake City and the border with Nevada. Here, huge salt flats stretch out for miles, providing a perfectly flat surface that allows cars to thunder up to maximum speeds without any difficulties.

The “Project 64” Mini will line up in the class for vehicles up to 1000 cubic centimetres. Garry Orton, Guy Griffith and Garry Grant have achieved all the technical requirements to set a new record. However, the success of the project, in which the trio and their sponsors have invested about 100,000 dollars, is not entirely in their hands. The local weather conditions and the surface of the salt flats play a major role in the speeds achieved by the cars. It is not yet certain what day the record attempt will take place. That also depends on the weather. According to the programme, the races get underway on Saturday 11th August. Then it is a case of crossing your fingers for what Orton, Griffith and Grant hope will be the fastest classic Mini of all time.