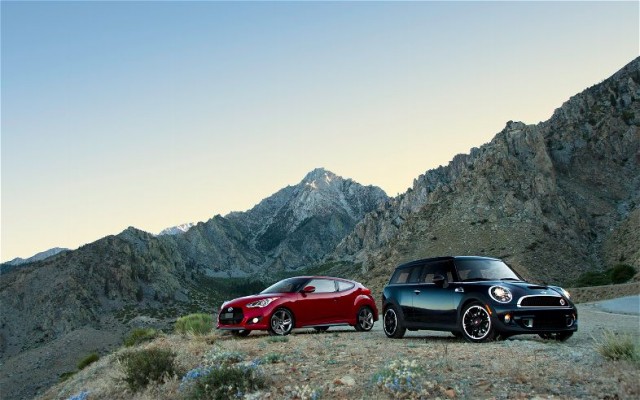 There’s a pattern for MINI “shoot outs” in the mainstream press that I think is pretty interesting. It goes something like this:

I’m not saying this is a bad thing. It’s just interesting how consistent it is. The latest example is Motor Trend, having chosen to put the MINI Cooper S Clubman up against the 2013 Hyundai Veloster Turbo. On the surface, this seems more like a comparison of convenience. I think they’re really just trying to give the Veloster Turbo a fair shake and they needed a yardstick. Ironically, the extended wheelbase MINI turned out to be a longer yardstick than anticipated.

At first glance, the spec chart shows the two are packing about the same heat: direct-injected 1.6-liter turbo-fours, six-speed manuals, practically the same-size brake rotors all around, and virtually identical combined EPA fuel-economy ratings (Hyundai’s 30.3 mpg versus Mini’s 30.1). On closer inspection, the Mini — having given up 20 hp and nearly as much torque, and running slightly narrower tires along with a higher weight-to-power ratio — doesn’t appear to match its more energetically charged counterpart. And the Veloster Turbo takes 87-octane fuel, where the Cooper S Clubman thirsts for 91 or higher. It’s starting to look like the new boy is about to pull a fast one.

But the Clubman takes the Veloster to school in the real world. Quicker and more consistent in testing, more adept at communication, and compassionate at the gas pump (30.5 observed mpg to the Hyundai’s 25.2), the Mini skillfully handled mountain roads, city streets, and the highway patrol with authority and expert steering. That grizzled tuning team at Mini — or BMW, depending on how you want to view it — knows how to extract a smile from the driver.

It’s an interesting comparison and I’d like some seat time in the Veloster Turbo myself. I wonder though, would better tires really close up the gap? Either way, formula notwithstanding, go check out the full article over at MotorTrend.com. It’s a good read.