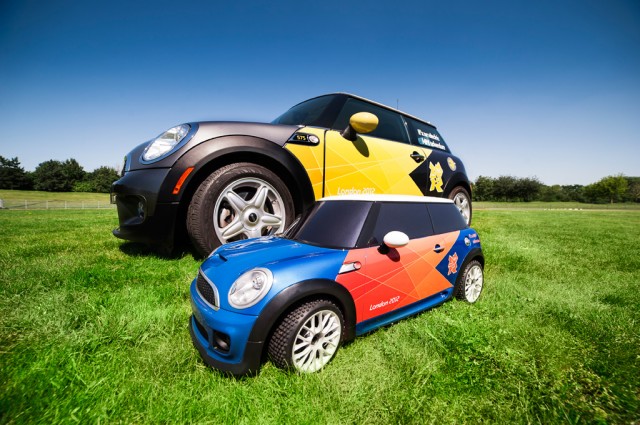 These days the Olympics mean not only international competition, but seeing brands clamor to associate themselves with the games. There are dozens of brands, big and small, who pay significant amounts of money to become the “official sponsor” or “official partner” of the Olympics in one avenue or another. And yet, did you know that advertising is strictly prohibited inside the games themselves?

So how exactly did BMW get a tiny version of the MINI Cooper inside the stadium? Businessweek.com has some of the answers. Turns out it was one part precedent, one part clever omission. Small remote controlled vehicles carried track and field equipment in the 2008 Beijing games, but those cars were more abstract in shape. The miniature MINIs hauling gear in the London Olympics are near exact 1/4 scale replicas of the MINI Hardtop, but bear no logos or branding graphics anywhere on the car. MINI has cleverly leveraged the recognizable shape of the MINI and its well-known British heritage to keep this car in the realm of propriety.

“It’s got no branding on it, it’s got no Mini badge on it,” BMW spokesman Graham Biggs said of the little cars. “But people like to recognize things and we’ve had a fantastic reaction from people who see them in the stadium. The whole idea of Mini is it’s a fun brand, the cars are cute and they have a smiley face.”

Were the Olympics being held pretty much anywhere else in the world, I doubt MINI could have gotten away with this, Olympic partner or no. The proverbial stars aligned to give MINI an opportunity to do something fun, clever and highly recognizable. The response seems to be overwhelmingly positive.

Businessweek.com also had some interesting details on the little cars themselves. They were built internally by BMW, and cost approximately $14,000 each. So for those of you hoping to get your hands on one of these little cars for yourselves, you could actually have a (used) full-size MINI for less money.