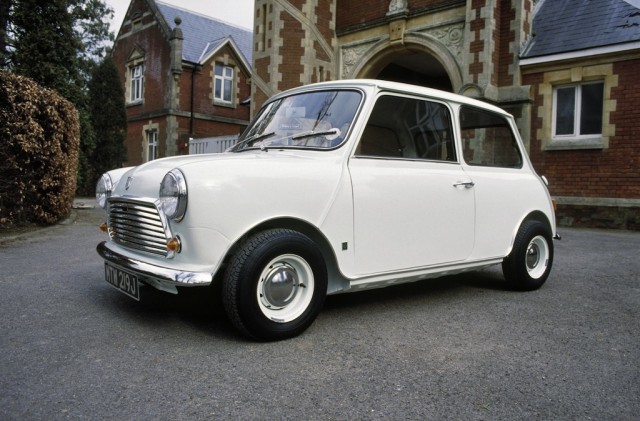 53 years ago, in September 1959, sales began of the Morris Mini-Minor and Austin Seven, and the classic Mini duly embarked on what was to be a triumphant assault on the world’s consciousness. 41 years later production had passed the 5.3 million unit mark, the revolutionary small car having blossomed into a legend. The classic Mini remains a motoring icon today – particularly so in its native Britain, but also much further afield. The car’s special place in the hearts of British car fans is reflected in a recent survey conducted by motoring magazine Autocar, in which it was crowned the “greatest British car ever made” – the best and most important car ever built in the British Isles.

The Autocar poll was carried out as part of a report on the recent boom in the British automotive industry, in which the successor to the classic Mini has played a significant role. More than two million cars have been produced at MINI Plant Oxford since the relaunch of the brand in 2001. The MINI production triangle – which includes the press shop in Swindon and the Hams Hall engine factory, as well as the Oxford assembly plant – is currently preparing for its latest expansion in production capacity. The move takes the BMW Group’s investment in its British production facilities over the last 15 years beyond the £1.75 billion mark.

This investment secures the long-term future of a traditional cornerstone of the British car industry. The first Morris Mini-Minor rolled off the production line in Oxford in 1959. Together with its sister model offered under the Austin brand, the four-seater – designed by Deputy Technical Director of the British Motor Corporation (BMC) Alec Issigonis – triggered the start of an automotive revolution, the effects of which can be felt to this day. BMC wanted its new development to be affordable to buy and run, but its greatest impact came in the form of the myriad innovations which would go on to become essential elements of small and compact vehicles across the board. Issigonis had designed his 3.05-metre-long model not only with front-wheel drive but also with a four-cylinder engine mounted transversely at the front and a gearbox positioned below it. This principle, together with wheels positioned at each corner of the body, allowed maximum interior space to be created on the smallest possible footprint.

Issigonis also broke new ground with the chassis construction of his new car. A subframe for the powertrain, steering and suspension, homokinetic joints to reduce torque steer, and rubber springs all combined to imbue the classic Mini with a go-kart feeling that continues to put smiles on faces today. All in all, its construction enabled the diminutive Brit not only to provide miraculous levels of space and deceptively good storage capability, but also to display supreme cornering gifts and impressively agile handling.

This brilliant concept could work for more than just a car, and sure enough a Mini van and fully glazed estate version with longer wheelbase and twin rear doors – launched as the Morris Mini-Traveller and Austin Seven Countryman – soon hit the road. The sporting talents of the classic Mini inspired Formula One racing car designer John Cooper to come up with a specially tuned performance version. The Mini Cooper, boasting engine output increased from 34 to 55 hp, duly arrived as early as 1961, to be followed two years later by the Mini Cooper S developing 70 hp. In road trim, the two models were quickly embraced by sporty drivers in the know, while on race tracks and rally courses they took on the role of giant-slayers, leaving larger and more powerful rivals trailing time and again in their wake. The trio of overall victories notched up in the Monte Carlo Rally between 1964 and 1967 represent indelible milestones in the life of the classic Mini.

Three decades later, the popularity of the nippy urban car – all but unchanged in its basic form – was still very much intact. By this time, customers had long had a wide variety of front-wheel-drive small and compact cars from which to choose, but only one model could claim to be the original, groundbreaking car in this class: the classic Mini. It was named “Car of the Century” in an Autocar vote in 1995, and there was only one winner in the latest survey, too. The magazine’s writers can understand why: “It’s no surprise the Mini came out on top. It had a bigger impact on Britain’s car industry that any other car.”

As the trailblazer for a new vehicle concept and a byword for driving fun in a compact vehicle, the modern MINI has followed successfully in the tyre tracks of the original. In 2011 a jury assembled by German car magazine Automobilwoche named it “Car of the Decade”, their reasoning recalling Autocar’s latest eulogy to the classic Mini: no other model, the Automobilwoche experts concluded, had influenced the development of the automotive industry to a greater degree since the beginning of the 21st century than the MINI. As the first small car in the premium segment, the MINI has inspired numerous other manufacturers to produce similar concepts. But it has also kept alive its position as the original in its class, not to mention as market leader.

NYTimes: Clubman in Name Only