Fast forward six years and we have a new GP. One that looks the part but, like the original, has garnered mixed opinions among the motoring press and enthusiasts alike. The critics point at 211 hp, down three from the original, and a set of graphics that some call garish. Yet there are signs that MINI did this second generation JCW GP even more right this time. With a coil-over suspension and six-pot brakes up front, for example. So what kind of GP is this? We flew to Mallorca in Spain, to Circuito Mallorca RennArena, to answer that question and get the story behind it all. 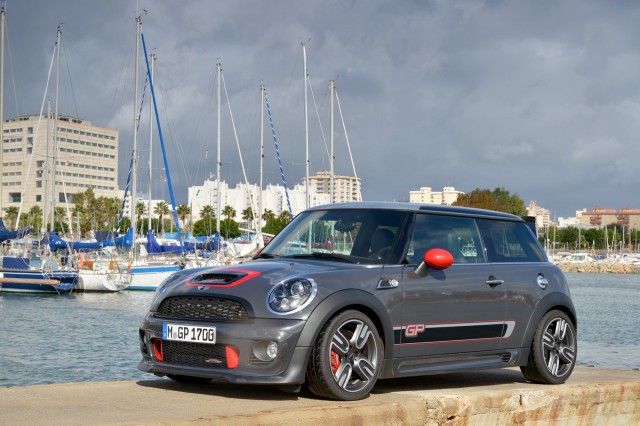 That was our consensus with the first GP. If the standard R53 Cooper S was visceral, the GP was twice that in terms of driving experience. Small, nimble and quick, it proved itself the second you took a corner at speed. Yet, it was flawed. It was a “parts bin” car that, while successful, didn’t feel like it had BMW’s typical Germanic stamp of perfection on it. At the time, we thought maybe that’s a good thing. Yet now that we’ve seen what MINI can really do (with more time and money), we’re left reevaluating the first GP a bit.

We’re going to tip our hat here. It may come as no surprise that the 2013 R56 JCW GP is the fastest MINI of all time. Yet what may be surprising is that it’s the most involving and engaging MINI we’ve ever driven. At the heart of this are four crucial additions to the standard JCW Hardtop: suspension, aero, electronics and brakes.

The GP’s fully adjustable coil-over suspension is the single biggest addition over the standard JCW. As much as the tires allow for maximum lateral G forces, they’d be worthless without this suspension. The proper negative camber allows them to grip at an almost impossible level. Much like an M car of the 80’s, the GP isn’t dominated by the engine or any one single aspect of the drivetrain. Instead, it feels like a cohesive performance statement. Not really something MINIs are known for, frankly.

Turn-in is immediate thanks to the quick ratio of the stock MINI steering. However, the bite is tenacious and there’s a fluidity in the new GP that’s missing in JCW. Thanks to the completely reworked suspension, the weight transfer is incredibly precise and the driver is given a level of information and control I’ve never experienced in a factory-stock MINI.

Even the JCW Coupe feels ham-fisted in comparison. There’s much less of the plow into corners as the front-end grips almost endlessly. When it does give-way (and make no mistake it eventually does understeer) it does so gradually allowing the driver plenty of opportunities to re-evaluate and make corrections as needed. 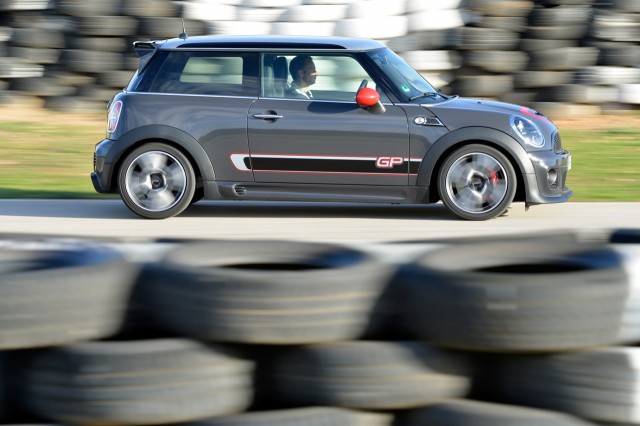 MINI first started testing the GP (at the ‘Ring naturally) during the summer of 2011. While the components were all there, it took another year to complete the fine-tuning of the car. Additionally, much of MINI’s race car development factored into the suspension and braking setup on the GP.

To this point, MINI Boss Dr Kay Segler stressed to me that the GP is 100% about the driving experience, not the horsepower rating. Sure, it sounds like marketing talk, but behind the wheel it makes sense. The E30 M3 had less than 200 hp in the US, and it weighed more than the GP does. And yet, it’s revered by purists as the pinnacle of the M brand. The R56 GP does one better by adding more power, more torque, immensely better brakes and modern electronics.

Dr. Selger went on to say that the same can be said of the most recent M5 (a car he oversaw while he ran BMW M). They could have easily tuned the engine up to 600+ hp. Instead, they purposefully kept the power around 560 hp (tough life right?) so that the engine wouldn’t dominate the experience. It sounds a little insane with power at that level, but having recently reviewed the M5 on BimmerFile I can attest to it being true. The car is more than the sum of its parts rather than simply a 5 Series with a huge engine. The same principle applies to the new GP. 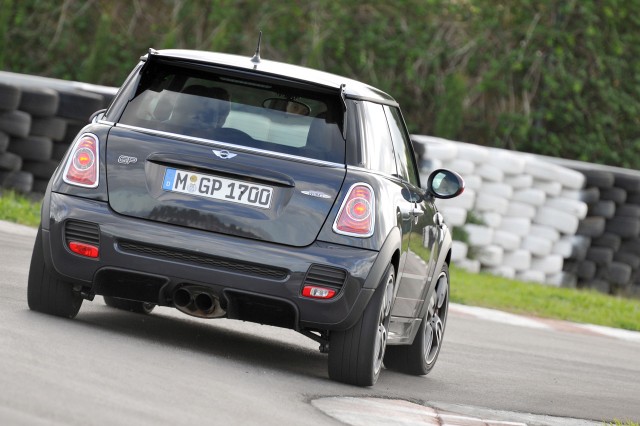 If you read between the lines of what MINI is telling us, it would seem that dramatic power increases in the JCW power plant were simply off the table. The GP is equipped with the same 1.6L engine found in the standard JCW cars save for the Countryman. MINI massaged the engine electronically to increase power from 208 to 218 in most markets. However in the US, thanks to potential homologation costs for such short production run, the output is only bumped to 211. This gives the GP 0-60 times of around six seconds. The fastest MINI yet but clearly not at the upper echelon of mid-priced performance cars. So without a significant power increase, what is the measure of performance? Simple. The ‘Ring. The benchmark became to create a new GP that was dramatically faster around the Nurburgring Nordschleif, but with only a modest power bump.

With faster ‘Ring lap times as the goal, MINI looked at a number of solutions, including even all wheel drive. Yet as Dr. Kay Segler himself told me, once they looked at the options, they were convinced that more power and more wheels moving only added complexity. It also took away from the purity of the driving experience. While there are specific instances where power helps, on a twisty, technical track like the ‘Ring, it only disturbs the weight distribution on a car as small as the MINI. AWD also disrupts balance and adds unnecessary weight to the car. To further prove this out, they talked to the leading MINI team in the German VLN series — one that has a number of larger and faster cars competing. Their MINIs consistently leading on tracks such as the ‘Ring and Hockenheim with a tuned JCW engine and front wheel drive. All wheel drive simply didn’t interest them. 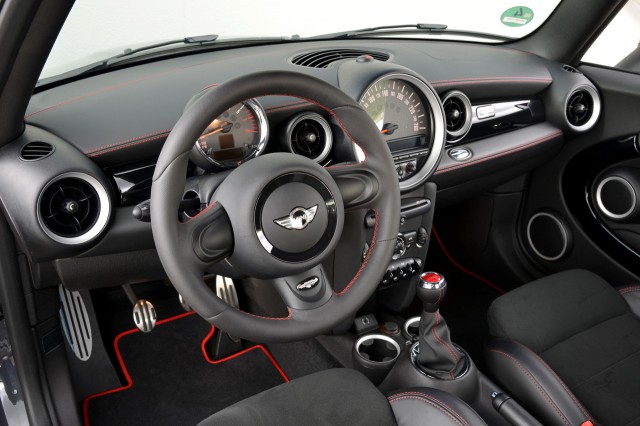 As much as the suspension defines this car and reduces lap times, the braking performance is also a key part of both its ‘Ring time and its character. The six-pot Brembo front brakes don’t blow me away with their stopping power initially. Yet lap after lap, I realized that I could go deeper and deeper into corners. After my ten laps (and countless other laps by a few other journalists) there was basically no brake fade to speak of. This braking setup is very close to that on the BMW 135i, with these huge brakes up front and standard JCW hardware on the rear wheels.

MINI also sweated the details when it came to the aerodynamics. Remember that wing on the original GP? MINI knew they could do better. Now that BMW has one of the best wind tunnels complexes in the world, MINIs are getting a lot smarter at cheating the wind. The subtle differences between the first GP and the new one demonstrate that. The GP’s redesigned, smaller rear wing is dramatically better at reducing lift. How much? An astonishing 90%. Drag is also down 6% thanks to the use of underbody trays around the engine compartment and some subtle panel additions near the front bumper.

Electronics also play a big role in the new GP. As anyone who’s driven a high powered M car from the past year can attest to, power management has advanced dramatically since 2006. The GP’s new system allows for much more slip and aggression before intervening. Yet when it does intervene, it does so with a light and almost invisible touch. It’s the sort of thing that makes a driver look even better at the limit than they actually are.

MINI didn’t shy away from the weight topic when I brought it up. Because the R56 is a much more weight-optimized car than the R53, it’s much harder to strip out the 60-odd lbs pulled from the R53 GP. Thing is, the R56 GP did lose weight. It just gained it back in better seats, brakes, etc. 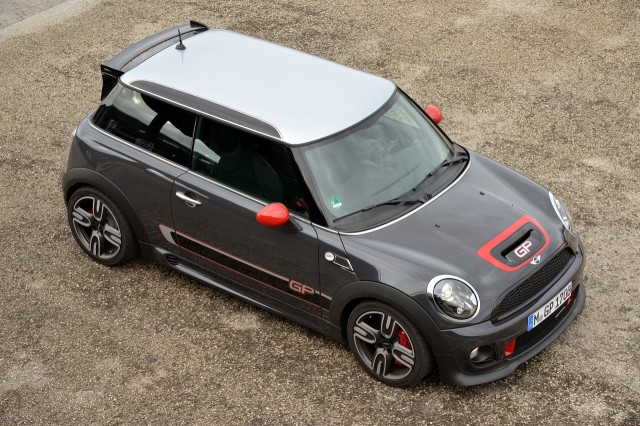 There will be no mass-marketing for the GP. There won’t be a Superbowl commercial. There won’t be one of MINI’s famous outdoor stunts. MINI’s marketing strategy for the GP is to simply allow MotoringFile and other media outlets to tell the story of this car. Simple and straightforward. Go where the enthusiasts are. I could see the look of excitement on the face of the GP’s product manager when he asked me what I thought of the GP. Keep in mind, within the past week I’ve driven a JCW Roadster, a BMW 1M and a BMW M5. Yet after all of them, the GP was an astonishing amount of fun. Maybe not as immediately visceral and grin-inducing as the original (supercharger whine tends to do that), but this car is genuinely, intensely fun around the track. As everyone knows, grins get bigger the faster you go around corners. At that metric, the new GP is unrivaled in the MINI world. Past and present.

MINI USA will be allotting one of the 500 US bound $39,950 GPs to each dealer in the US for March delivery. The rest however will go to customers on a first come first serve basis. MINI USA will open a toll-free reservations number in mid-November that will allow anyone to plunk down a deposits (likely around $1,000) and name their dealer where they want to take delivery.

Allocations outside the US will be roughly similar to the original 2006 GP.

Sure, the new GP is noticeably different than the original. I think one can look at it two ways. The new GP isn’t as raucous and visceral as the 2006 version. Yet, it’s much more well-sorted. It’s simply better at going fast. There’s less bark but there’s a hell of a lot more bite this time around.

No one at MINI will ever brag about it directly, but they nailed it with this car and they know it. It’s a statement left unsaid, but I couldn’t agree with it more. I wasn’t alone. Even the most jaded journalist in our press group (who is far more jaded than even the harshest critic of the GP here on MF) was clearly impressed with the car.

With the 2013 GP, MINI did it right. Suspension, brakes, electronics, aero and yes, weight. In doing so they’ve raised the bar dramatically from the first GP. It’s something the numbers and the photos just couldn’t tell us. There really is no substitute for good old fashioned seat time The power figures may be less than we expected on paper, but the fun factor and outright speed is way up. What MINI, and more specifically JCW, have finally created is a car that feels M-worthy.

The JCW GP at the Track

Schroth Harness System for the MINI