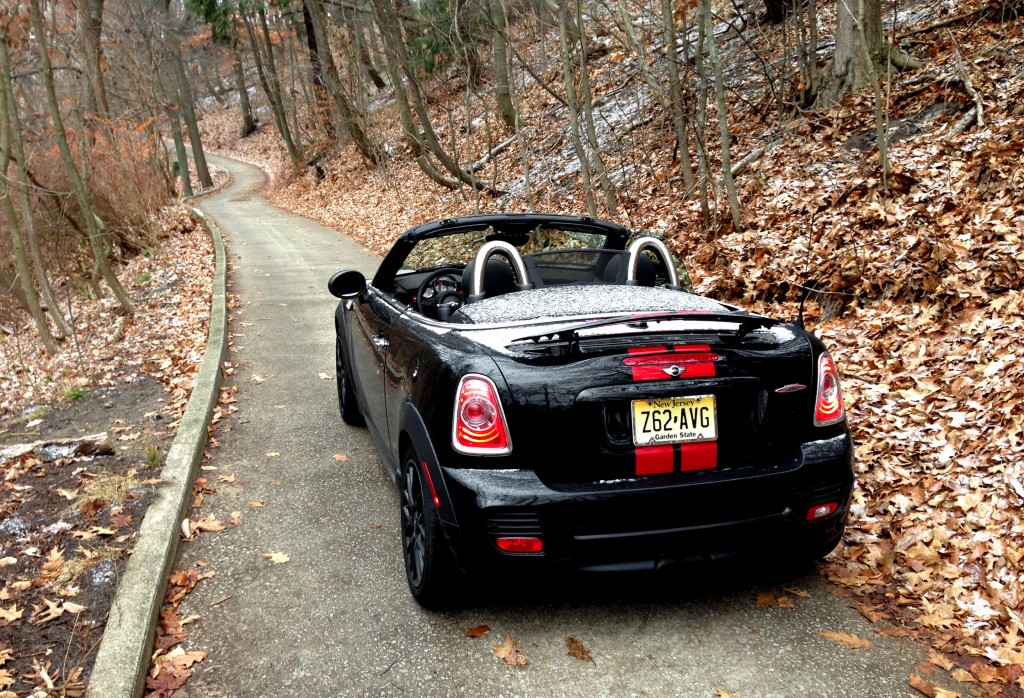 It’s pitch-black, 43F and my top is down as I head into Michigan. This isn’t the sunny coastal drive that this car was made for but it’s doing this late Autumn Midwestern drive justice nonetheless. It’s no surprise that our Roadster has been a healthy dose of fun since we picked it up fresh from MTTS. From the weekend road-trips to the day to day, it’s proven to be a delightful combination of performance, style, and usability. And if you follow any of my Instagram feed you’ll know how often this car has been thoroughly tested on long midwestern jaunts. But this one was to be different. The goal was to go top down as long as possible through Illinois, Indiana, Michigan and then finally to Wisconsin. And it’s December.

But enough of about the cold. Let’s talk performance. The JCW powerplant has always felt greater than the sum of it’s 1.6L worth of parts. Eager to rev and with plenty of power in the mid-range, there’s never a issue with 35-65 mph blasts or on-ramp maneuvers. But all the power is for naut in low traction environments. With the summer tires refusing to work in temps below 40F, it’s easy to spin them in the first three gears from a dead start. Bad went to worse later that night as the snow started to fall. By the time I reached the night’s stopping point grip levels had moved into the “entertaining” category.

Day two. Full tank of gas and backroads. It may not be a sunny European mountain road but the Western Michigan coastline will serve just fine. The Roadster does well with warmed seats and the heater set in the “HI” position. But none of it makes up for a good hat and gloves – something especially required 40F temps longer than 30 minutes. And after 30 minutes? The more cocooning MINI Convertible with its taller windshield starts to feel like a pretty good option. But then again this is what the Roadster is about. Closer to the elements, the road and of course the sensation of speed.

It’s also at home on the streets of tourist towns that dot western Michigan. More than any state, Michigan prizes the American made car. Yet I heard and saw more positive reaction to the little black and red roadster than I have experienced anywhere. And the cross section really surprised me. Older men sure, but even the attention of teenage girls and reluctant appreciation of younger guys was readily apparent.

Heading into the hills of western Michigan the propensity of the Roadster chassis understeer at the limit and beyond (unlike the Coupe) isn’t unwelcome. In snowy and icy conditions it proves to be the right set-up and one that allows you to drive quicker with more confidence. Granted snow tires would help tremendously if speed and confidence is your aim. And they’ll help us as we should be getting a set within the next week or two. (Editors Note – we at MF never recommend driving a MINI or any car on summer tires in snowy conditions)

Putting the top down seems to solve the cold-weather related rattled we’ve been hearing. All told our roadster feels like an incredibly well built and engineered little car. No it’s not as purposeful and solid as the MINI Hatch or Coupe but it’s unquestionably the enthusiasts choice when it comes to small front wheel drive convertibles.

Day three brought outright snow and more than a little trepidation. Keep in mind I love driving in snow. E-brakes and snow on the ground are the ingredients for winter bliss in my opinion. But driving a MINI in snow without winter tires or (much worse) on summer tread deserves a mountain of respect from the driver. It can still be fun but limits are much lower and much less of a known quantity from corner to corner. In short it’s the wrong time to really push a car.

Ah but the top still goes down. So with snow on the car I started headed west and into Wisconsin. Unfortunately the weather demanded the top back up as the snow turned to sleet and then rain in heavy doses. Soon both sets of fogs were on and the Roadster was being tested in a completely different way.

The downside with almost any convertible is always vision. The R59 is no exception with massive blind spots made worse by low visibility. Not that a quick turn of the head doesn’t solve the problem but a blind-spot warning system would be welcome in future versions of the car.

The other downside can be noise. With the Roadster’s single layer top (the Convertible has a two-layer unit) there’s not a lot keeping road noise out of the cabin. It’s especially apparent over the shoulder of the driver and passenger in the general vicinity of the rear wheel well.

The Roadster does well on long highway jaunts despite the quick steering ratio and short wheelbase. Over the years more than one journalist has called the current MINI’s steering too nervous at high speed. For a long-time MINI owners it’s a questionable statement given that the current MINI is such an improvement over the R50/R53 in this category. Without ditching the run-flats or lengthening the wheelbase I’m not sure how MINI could have straddled the line between comfort and quick reflexes any better.

Later in the day I’m met with more snow in Northern Wisconsin and naturally more caution. Yet I have a hunch that, with the proper winter set-up, this car will be a blast this winter as are all MINIs. But we’ll get to that soon enough.

Three days. Five hundred miles. 35 mpg at highway speeds – many of them with the top down. This is how you use a Roadster in December. And credit to the car as it dealt with fowl weather, a couple cases of beer in the trunk and maybe one or two enthusiastic tugs of the e-brake. It’s not the perfect car or even perfect convertible. Let’s reserve that for things like an M6 cabrio or an hulking AMG Mercedes. No this Roadster is wonderfully flawed as most MINIs are. Full of spit and vinegar yet docile and stylish when required. The JCW Roadster is hard to not love the more you pound on it.

As I pull into my driveway it feels like a real journey is over. Further, putting the top up I’m struck by how that little top being down completely changes the experience of driving. We’re so used to cars that coddle you to the point of comatose. Automakers spend countless millions trying to remove the world (and all joy that comes with it) from the equation of driving. Spending this many miles with the top down and the temps low in a MINI Roadster brought me back to the best experiences I’ve ever had behind the wheel. The kind of experiences that remind you of how engaging the simple act of motoring can.