Pop the corks. BMW has beaten Mercedes (and Lexus) to hold onto the luxury sales crown in the US. In fact Mercedes had led BMW throughout the last part of 2012 and looked to finally take the crown from BMW. While the results certainly owe a lot to the solid product dealers have on the lots, BMW and MINI’s recent incentives certainly didn’t hurt things. Full figures after the break. 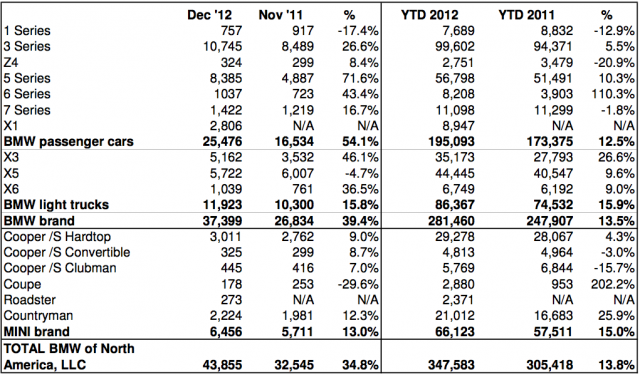 “We like to say the world is becoming more MINI and the record 2012 sales is the perfect conclusion to our 10th anniversary year in the U.S.,” said Jim McDowell, Vice President, MINI USA. “We are a quick and agile brand with an expanding vehicle portfolio, a growing dealer network and a great year ahead.”

BMW’s U.S. sales rose 14 percent for 2012. Mercedes’s 2012 U.S. sales rose 12 percent to 274,134 excluding Sprinter cargo vans. Last year BMW topped Mercedes in the United States by 2,715 vehicles. Sales tallies do not include Sprinter Vans, Smart (Daimler) or MINI as they are not classified in the luxury segment and are not under the respective brand names although under the parent company.