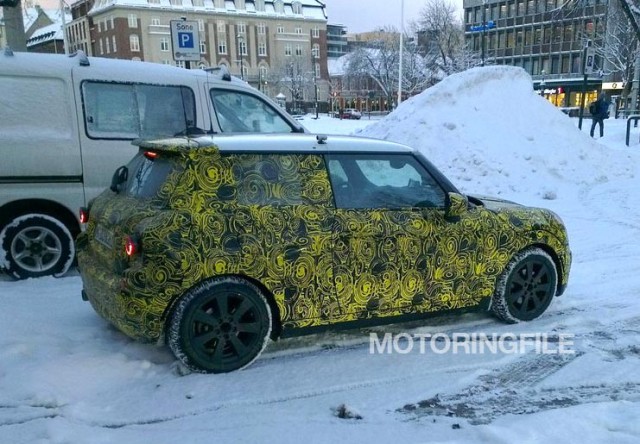 today starts the beginning of an entire week here at MF centered around the upcoming and completely new 2014 MINI.

The Cladding is coming off and the next generation MINI is taking shape. As these exclusive spy-shots (via MF reader Øyvind Repvik) show, the three door F56 hatch will will feature a very similar silhouette to the outgoing R56 and the R50 before it. But don’t let the overall shape fool you, this is an entirely new car. From the drivetrain to the design in and out the F56 is the biggest re-think of the MINI since the 2001 R50.

While we’ve had several readers tell us about seeing F56 mules almost without camo in and around Germany, what we have here is a group of heavily clad F56 test mules going through a final cold-weather evaluation. That means all exterior lights are faked and the details of the front and rear facia covered up by plastic and then taped. But we can still see a few notable details here. For one the rear tail-lights will be moving on from the floating design from both the R50 and R56. That means the inner cut-line will not also double as the edge of the hatch. It’s a cost savings measure that we hope allowed BMW to put more money into drivetrain development. And knowing what we do, we have a hunch that’s exactly what has happened.

With the F56 being developed alongside the new front wheel drive BMW, one of the more pressing question in the minds of most MINI fans is probably this: is there enough difference between the new BMW and the F56? Do the cars share so much that the soul of MINI is lost in the cost savings of sharing platforms with the Bimmer? Is the new MINI just a badge change? Based on sources we’ve spoken with inside MINI and BMW who’ve seen both new designs (people have been in the room with both of the prototypes), the answer is a resounding no. The takeaway we’ve heard? You’d never guess the same chassis platform was underpinning both cars.

Despite concerns on the interwebs the next generation MINI isn’t getting larger outside of perhaps an inch or so to deal with crash standards. And it’s also not getting heavier. In fact our sources are telling us to expect the opposite.

While all the F56 test mules we’ve seen thus far have been heavily camouflaged using tack-on panels and MINI’s normal psychedelic yellow pattern, our sources have helped us peel back the tape a bit.

Let’s start with the one thing that caught the most attention – the elongated nose sprouting out far over the front axel. The MINI has always been known for it’s wheels on the corner stance and this test mule seemed to be completely at odds with it. Luckily we believe this is not a hint of it’s final production form.

Sources have been telling us in the past few months that the front of the F56 will be very reminiscent of the Rocketman concept in the way the hood is less sloped and more flat. According to these same insiders the F56 will also feature the Rocketman’s large upright grille but with a chrome surround instead of black.

Elsewhere looks for a few more creases – notably just above the plastic wheel arches which are also confirmed for the next generation MINIs.

Around back the F56?s rear logo is no longer set in the body, but in the plastic trim/grab handle. Otherwise the rear should be a natural evolution of the current MINI form language.

But that doesn’t mean we’re not in for a number of small surprises. One that we can share has to do with the fuel filler cap. On the Cooper S, the S logo is pressed into the chrome fuel filler cap itself.

Also worth noting, the F56 will be offered with an optional slim-line roof rail whih fit very close to the body. This is very similar to BMW’s offerings on the new X1, X3 and wagon models. This option will allow for a much easier and non-evasive way to attached bike racks etc.

Wheels are growing slightly with sizes ranging from 15″ to 18″ from the factory. And yes, the MINI will be moving to a five bolt pattern to match the new front wheel drive BMWs.

In the coming days we’ll be going into details on the new MINI focusing more on the interior technology and finally the new family of three and four cylinder engines powering the car.

More Powerful MINIs are Coming in 2018