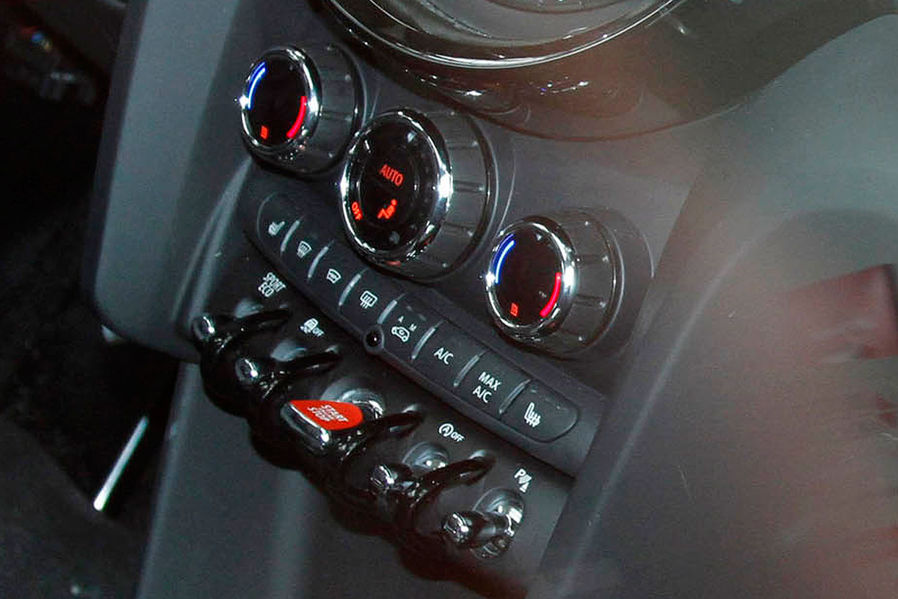 Sources familiar with the new interior have called the final form a huge step forward for MINI and likely one of the selling points of the new car. While these photos don’t fully show that new form, they do show a radically altered design brimming with new technology.

Then there’s the odd looking bezel around the central stack. That chrome bezel that happens to be in the passenger’s hand is a bit more than the simple piece of plastic it may seem. The strip around the circular portion of the centre stack is actually mood lighting which lights up and swirls around when you engage the keyless ignition (now standard).

Additionally, there are those seats. Seats that offer one thing that we’ve been clamoring for since 2001 – thigh bolstering. Long a hallmark of BMW’s optional sport seats, it would appear that MINI will finally be getting the option thanks to parts sharing. And that’s not all. The seats shown also have more aggressive side bolstering and look to feature alcantara as well. What is still not final is if the MINI will receive the adjustable bolsters BMW’s do or just fixed position bolstering for those sport seats.

MINI fans are already asking, what about the speedometer? The center speedo on the MINI is no more starting with the F56. This is for two reasons. First, MINI has taken hit after hit in consumer surveys with the primary speedometer being located in the center of the car. They’re finally listening to that feedback. Secondly, the electronics of this car will be almost identical to the upcoming front wheel drive BMW, and while that doesn’t mean they couldn’t do a center speedo, it meant that there was additional cost this time in making it happen. 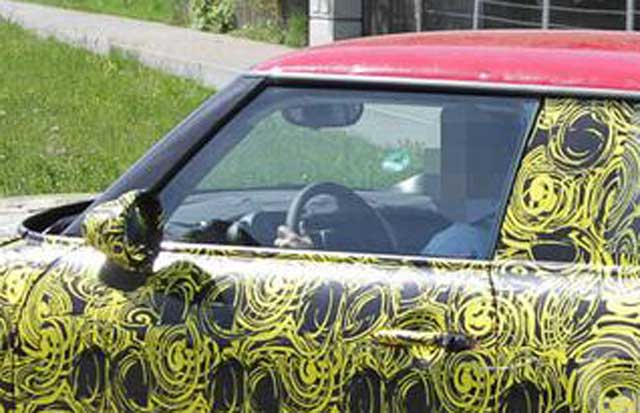 Instead of the center speedo, the F56 will feature a traditional dial speedometer behind the steering wheel where the current rev counter is. The new tack will be a smaller, semi-circular gauge attached to the left hand side of the speedometer. It’s a more contemporary design, and frankly, a little funky. Changed though it is, one could never accuse any MINI interior of being boring.

The air vents lose their circle shapes with the center two vents being a more traditional square shape. But don’t fret, the circular theme will be continued with round vents near each door.

In the photo, just behind the passenger’s left knee, is the large triangular chrome-and-red start/stop switch which is designed at this time to pulse like a heart beat when the ignition is turned on. However, this isn’t final and may get removed for production.

The circular bezel around the shifter itself is also a bit more than a piece of plastic. It’s actually a switch that can rotate from ECO to Normal to Sport settings. The system will operate in an identical fashion to BMW’s current system. Sport will work similar to the current sport button in that it gives the steering more weight (but not less feel as with the current system) along with more aggressive throttle response. On cars with the optional 8 or 9 speed auto the button will also change shift programs so that gears are held longer and the shift points are more aggressive for better acceleration.

As mentioned previously, what we are seeing here is the lowest specification entertainment interface, but as some of you have pointed out, it’s coupled with a prototype H/K system as evidenced by the tweeters in the A-pilar.

There you have it. Lots of new design elements within a revised design language. But what about the technology? Check back tomorrow for a full rundown of technology that MINI will offer with the F56.