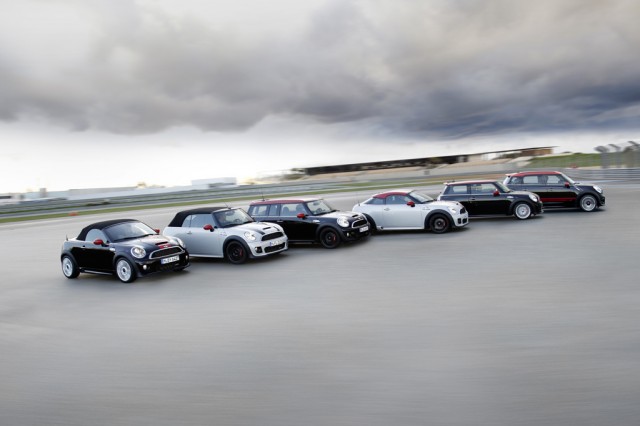 For years we’ve been reporting that MINI’s line-up will expanding. And as you know it has, going from one model to seven models in as many years. But recent comments by MINIUSA head Jim McDowel and several BMW Board members have underlined the fact that more changes are foot. We’ve reported on quite a few:

1. MINI 3/5dr hatch – Increased demand for utility leads to the next generation MINI, due next year, to feature available five doors for the 1st time.
2. MINI Traveller – MINI’s version of the Active Tourer. It’s designed to show how both cars can co-exist with individual style and flexibility.
3. MINI Convertible – The F56-generation version of the popular 4-seat, open top MINI.
4. MINI Roadster – The next Roadster and Coupe will launch with a sportier look completely separate from the standard MINI. MINI design language will remain but the bodywork will no longer be based on the hardtop hatch.
5. MINI Coupe – Coupe version of Roadster, and as mentioned above, more individual in appearance than the standard hardtop hatch.
6. MINI Sedan – A sporty four door MINI aimed at further growing the market for MINIs. Could potentially be MINI’s best seller worldwide, overtaking the Countryman.
7. MINI Countryman – Next generation of the global MINI juggernaut, the Countryman will finally share its underpinnings with BMW X1.
8. MINI Paceman and Paceman XL – Next generation of newest MINI member will be offered with the current 3-door version, as well as a 5-door.
9. MINI Clubman – Current car revisited with more style and more flexibility. Anticipated as more of a Shooting Brake with dynamic raked roof and forward looking proportions.

But is BMW starting to look at this line-up and wonder if there’s too little variation between models? Or if they’re not, should they? Do they have the right product mix? Are they relying too much on larger (for MINIs of course) products and not focusing on something smaller and more in keeping with the original Mini? Let us know in the comment section below.

MINI Sales Up For November

MINI Opens Nominations for All Those Who Defy Labels