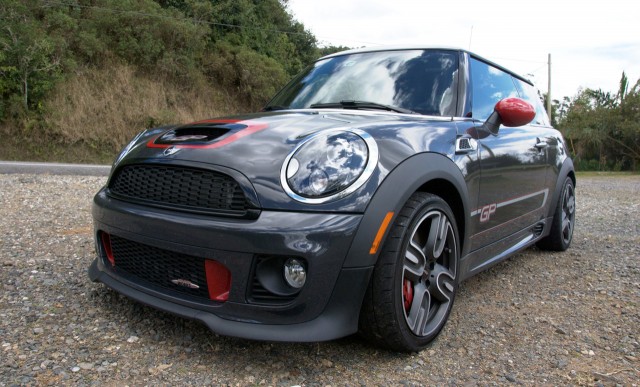 Australian motoring site and friends of MotoringFile, Ausmotive.com, are reporting this morning that MOTOR Magazine has named the second generation JCW GP as the latest winner of their “Bang for your bucks” award. One judge called the GP the “best MINI I’ve ever driven, especially on a track.” We couldn’t agree more.

Head over to Ausmotive.com for their full take and some down under GP photos. You can also catch the full MINI Australia press release after the jump.

The official news from MINI Australia:

The powerful pocket rocket proved its race track credibility and stole the BFYB crown from an impressive line-up of four-, six- and even eight-cylinder vehicles.

One BFYB judge described the JCW GP as the “most talented Bang winner in ages”, while another dubbed it the “best Mini I’ve ever driven, especially on a track”.

The MINI JCW GP arrived in Australia earlier this year and has received a red hot reception from the general public and motoring media alike, topped off by claiming the BFYB award.

The vehicle was designed to shine on a race track and is the fastest production MINI ever built.

And it’s not shy about stopping, either. A BFYB judge declared that “the GP aces the field on braking distance from 100km/h” – a result achieved thanks to an individual traction control system, bespoke racing suspension and exclusive 17-inch rims which house the high performance braking system including a six piston fixed front brake caliper.

“Our entire MINI range – including the original hatch and the just released Paceman – are renowned for being tons of fun on the road, as well as on the race track.

“It’s great to see that Australia’s most popular performance magazine thinks so too.”

The 2013 Bang for your Bucks incorporated two full days of intensive track testing, conducted and judged by a group of some of the most experienced and knowledgeable road testers in Australia.

Special thanks to Liam over at Ausmotive for the info.