This week BMW not only took the wraps off of a car but brand and a strategy. Creating something sustainable that performs up to all expectations is a very tall order. But given our time with the i3 today we have to admit things look very promising.

Without question the BMW i3 takes some getting used to. It’s a new shape, new controls and new touch-points. There’s grass (actually pressed hemp) in the door and dash, leather tanned with environmentally friendly oils and seat backs made out of recycled bottles. Yet the first impression (especially once you step inside) is one of the future. As in this is it. Finally we have a concept car that we can buy.

It makes the BMW Active E electric test car look 20 years old rather than two. Everything has been re-thought if not re-imagined. Granted that doesn’t mean everything is different. But nothing on the i3 hasn’t at least been thought about from a new angle.

As MINI fan all this points to an interesting future. But more on that later.

We’ve got tons of facts and figures on the i3 in previous articles so if you’re looking for that you’ll be best served moving onto one of those. This is about what it feels like to see it in person, touch it, sit in it and experience it.

It’s tall and narrow. But less than you’d expect give some photos. It’s frontal design language (the black band and the underbite) gives the car more of a menacing look than it’s shape would otherwise indicate. And in person it all works rather well – 19″ and 20″ wheels helping a great deal.

Here are a few points on the exterior:

– The body is plastic. As in: you touch it and it will bend.
– LED lights look look terrific. Halogen’s look terrible. So glad the US won’t be getting them.
– The Orange and black is the best of the three launch color combinations IMHO. It’s interesting to see BMW using color combinations similar to what MINI has done for years.
– The rear 3/4 angle is perhaps the only truly awkward part of the car. We’d imagine darker colors would help that a great deal. Time should also help. 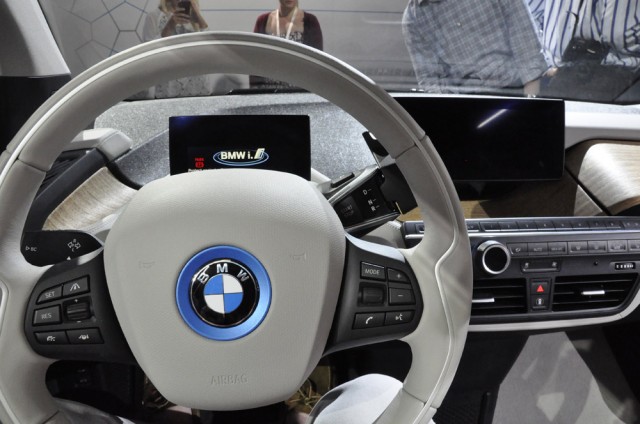 As much as the exterior is shocking, the interior is simply a revelation. The touch-points are generally the same . Steering wheel, gas, brake, iDrive are all where you’d expect them. But similarities end there with the rest of the BMW range.

– The seats are thin and in fact don’t even have a back to them in the center to reduce thickness, shave weight and increase rear passenger space. Why we don’t see this technique on the MINI or 1 Series is beyond us. It’s smart, comfortable and looks amazing.
– Navigation is standard in the US but there will be two sizes. The Technology Package will offer the larger of the two screens.
– The screen behind the steering wheel is actually not all screen. Instead it’s a sliver of a screen with black glass covering idiot lights on the top.
– The steering wheel feels great as does (surprisingly) the shifter. However, engaging “Park” could be easier.
– The seats don’t have a lot of lateral support. Not designed with the intention of track days.
– Wool and leather combination looks and feels wonderful. Highly recommended.
– The pressed grass (yes grass) dash material looks organic but feels not that dissimilar to the normal material used.
– Back-seat space is adequate and on par with a 3 Series. I was comfortable at 6’2″ with another 6 footer in the front seat.

All told the i3 really impressed me. In person and hands-on it’s an exceptionally well-thoughout car with great fit and finish. How the American public (much less the world) reacts to all of this technology and thinking will be fascinating.

BMW i3 Outselling Tesla & What it Means for an Electric MINI