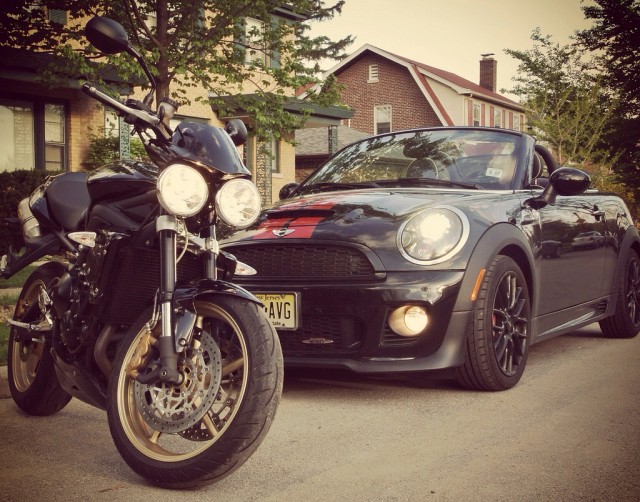 It’s no secret that our MotoringFile long-term review car, a MINI JCW Roadster, has won us over to open top motoring. Between the grunt of the turbo, the overall refinement of the options we chose, and the infinite sky above our heads, driving the Roadster is a MINI motoring experience unlike any we’ve experienced before. Gabe has likened this visceral, out-in-the-world experience to riding a motorcycle. That’s his estimation, anyway. Gabe’s never actually ridden a motorcycle through the open countryside.

I, on the other hand, have a running motorcycle for every day of the week. I’ve been riding since 2007, and that open air riding experience is a big part of the lasting appeal. So in short, I can confirm Gabe’s assertion that driving the JCW Roadster has many motorcycle-like qualities. Yet it wasn’t until I spent a week with the Roadster myself that I understood just where those overlaps are.

In our (my wife also rides) current motorcycle fleet there is a precision instrument of English sport riding: a 3-cylinder, 675cc Triumph Street Triple R. To say it’s fast is an inadequate description of any modern sport bike. Let me try to put this in MINI-relative terms. The Street Triple R puts out 106 hp. That’s only a little less than the output of a stock MINI Cooper. However, that 106 hp is propelling a vehicle that weighs just over 400 lbs — roughly the weight of just the Cooper’s engine and front wheels. What does that mean in practical terms? Well, if you can keep the front wheel on the ground, you can accelerate a Street Triple R from zero to sixty in three seconds flat. That’s supercar fast, and the Street Triple R is only a mid-class sport motorcycle. Fully adjustable suspension front and rear plus car-sized dual front disks complete the performance package. Yet for all its capability, the Street Triple R is extremely easy to ride. It’s not twitchy or dramatic. Instead, its limits are well out on the horizon from day-to-day riding. Approach them if you like, but you won’t find them rushing up to meet you when you don’t expect.

Yet for all the Triumph’s capability, which bike I’m talking about is more or less immaterial. I have loads of fun on my 250cc vintage Honda scooter. The question at hand is how does the open top motoring of the MINI Roadster compare to the extreme exposure and pulse-pounding zen of riding a motorcycle? That’s what I set out to explore when Gabe handed over the key fob to our JCW Roadster. I’d have a week to see what all this soft top business was all about. Would I feel Gabe’s sense of freedom and exhilaration, or would it pale in comparison to going balls out on two wheels? Pulling away from MotoringFile HQ, what struck me first about the JCW Roadster was how strong it felt. The car felt utterly put together. It was light and stiff like a MINI should be and all the interior touch points felt substantial — especially that leather JCW dash. The low-end torque created by that JCW mill gave our Roadster a particularly eager feel, especially around town. The car just felt light and nimble in an organic way. This meant I could drive the Roadster assertively. Couple that on-demand power with the Roadster’s small size, and you have a recipe for effective urban progress. Like a good motorcycle or scooter, I was able to easily zip out ahead of traffic and stuff the Roadster into small gaps when needed. Also very enjoyable was the Roadster’s engine note — especially in Sport Mode. The relationship between growl and acceleration was just as pleasing as it is on most of my two-wheelers. On the Triumph Street Triple R in particular, there’s a very pleasant back burble and pop, just like the Roadster gets with the Sport Button pressed. I admit it, I’ve got a bias for British engine character.

My week with the roadster primarily involved commuting duty from Evanston down into Chicago’s downtown Loop — something I’ve often done in both my R53 and various members of our 2-wheeled fleet. What I experienced in the Roadster was a sort of glorious middle ground between car and bike. I had all the creature comforts and technological entertainment of a modern car, yet a very healthy dose of open air and traffic-busting performance. Like any good motorcycle, the JCW Roadster was kind of a bad influence on me. It made it all too easy to put the pedal down, whip around a slow-moving SUV and dash into an otherwise inaccessible “compact” parking spot. The Roadster also created that destination catch 22 all too common to riding a motorcycle or scooter. You get where you’re going, and you get there quickly, but you’re having so much fun you don’t quite really want to arrive. Also in common with the motorbike is the Roadster’s ability to conjure up any excuse to go for a spin — to be out in the world with the open air and growl of torque and horsepower in your ears. It’s also really, really tough to blend into the scenery in the Roadster. Everywhere I went it got looks, questions and admiration — just like an interesting old vintage motorcycle.

One could argue that any convertible could stand in for the motorcycle experience, but I couldn’t disagree more. Where most cabrios are loose, heavy, sloppy things the Roadster feels light and tight, just like a proper sport bike or fast scooter. It has an eagerness that only comes from matching good power with low weight. Even a more lumbering cruiser bike like a big Harley has enough grunt and visceral appeal to edge out the average soft top automobile in terms of how I’d rather navigate a country road. No, the Roadster comes the closest I’ve ever come in an automobile to that level of open freedom I experience on two wheels. Yet that said, the two experiences are still not exactly alike.

The Roadster is still a car. With its high shoulders and tub-like cockpit of creature comforts, it’s still a cage — even if it’s a cage without a roof. In the Roadster, you feel the wind in your hair and whipping around your shoulders. On a motorcycle, you’re propelling your whole body through the wind. Especially on a naked sport bike like the Triumph Street Triple R. Doing 70 mph top down in the Roadster is a pleasant and civilized experience, even with the significant wind noise. Doing 70 mph on the Triumph is to be shot out of a cannon — to have the world as your wind tunnel. It’s literally just you and the road, with the machine between your legs nothing more than an extension of your hands, feet and groin. At high speed and under intense cornering, you don’t so much ride a motorcycle as you wear it. It’s the most amazing pear of pants you’ll ever put on.

Truth be told, you’ve got to get into supercar territory before you can really start to compete with that feeling in a car. Yet that doesn’t automatically make the moto my preferred method of travel for all situations. Sometimes comfort is the way to go. If I’ve got two long days of straight driving to do, I’ll take the Roadster over the Street Triple R every time. That is, unless I plan to have a chiropractor ready to greet me at both ends of my trip. Sure, there are touring motorcycles (I’ve got one of those too), but there’s a time and place where a car is simply a better way to travel, especially with a passenger. At least with the Roadster I get to retain a significant amount of that open air, visceral experience that makes a motorcycle so much fun.

There’s also a logistical advantage to the Roadster. To ride the Triumph, I’ve got to suit up. Boots, armored and kevlar-reinforced pants, armored jacket, armored gloves and a helmet make up my riding gear. When I arrive, I’ve got to do something with all that stuff. It’s a hassle, but riding without it is just plain stupid — like driving a car with no seatbelt and one foot out the window. With the Roadster, I don’t need any special equipment or clothing to just hop in and drive. A pair of sunglasses and I’m good to go. In cooler weather, I might toss on a jacket and a pair of gloves, but I’d have those anyway if it’s chilly out. Convenience goes a long way, especially for day-to-day commuting and errand running. In the end, it’s all about what I’m in the mood for. If I’m looking for the maximum zen that comes from the visceral exposure of riding a motorcycle, I’ve got that available. If instead I simply need to travel, or am looking to arrive with much less fuss, then something like the Roadster is difficult to top. It retains much of that motorcycle experience, but with a lot less hassle. I have to admit (and I know this is heresy) that this JCW Roadster really tempted me hard to trade in my R53. It’s that much fun, and fun in a different way than my R53 has been. My wife even liked it, and she’s utterly indifferent to my Cooper S Hardtop. Is the JCW Roadster the perfect city MINI? That’s my opinion until I drive something better. Will I sell my motorcycles and buy a Roadster instead? Not on your life.