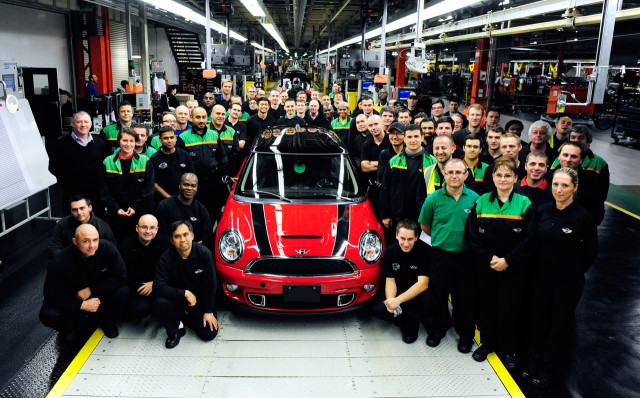 Having put a smile on over a million drivers’ faces across the globe, the last of the outgoing MINI Hatch drove off the production line at Plant Oxford today.

With production of the new MINI Hatch underway, associates at the brand’s historic Oxfordshire home took a moment to recognise their achievements in building a car which has formed the backbone of MINI’s burgeoning global growth.

1,041,412 of the outgoing MINI Hatch model have been produced at the high-tech facility, which has built more than 2.4 million MINI vehicles since 2001. 14% of all cars built in the UK last year were MINIs, and MINIs accounted for 14% of all UK vehicle exports in 2012.

When launched in 2006, the outgoing MINI Hatch saw the introduction of turbo charged engines and suspension enhancements which cemented MINI’s reputation for enthralling driving dynamics. With the introduction of MINIMALISM technologies, customers also benefited from improved fuel economy and performance in equal measure. MINI Connected appeared for the first time, setting the standard in the segment for infotainment and connectivity. This model also furthered MINI’s exciting and unique programme of customisation and personalisation, from bespoke roof designs to interior colour worlds, which has become synonymous with the MINI brand.

The New MINI Hatch is set to receive its UK launch in Spring 2014. Distinctly familiar, yet completely fresh from the ground up and enhanced in every single way, the new MINI Hatch features significant improvements in technology, engine efficiency and power delivery, driving dynamics, quality and – of course – personalisation.

MINI USA Sales Down 13% for November